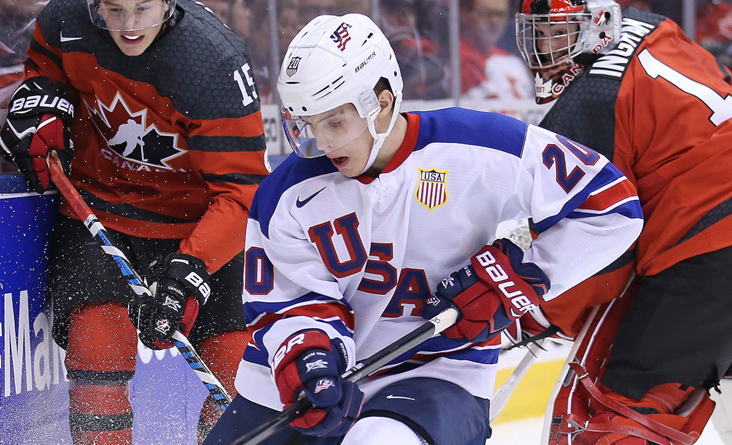 Buffalo on Deck to Host Event Next Year

TORONTO…The 2017 IIHF World Juniors hockey tournament is just about over, with the finals set for Thursday night (January 5) at Montreal’s Bell Centre. This year Montreal and Toronto served as co host cities, with both venues hosting preliminary round matches, while most of the medal round action shifted to Montreal.

This year’s 10 team competition has been marked by the lack of major star power, Finland’s fall from grace from last year’s champ to the relegation round, Team USA cruising through the preliminaries and beating Canada on New Year’s Eve. And games not involving Canada being played in front of oceans of empty seats.

Check that… Canada’s matchup against Latvia had a good share of empty sections in the upper corners. Their game against Slovakia posted an announced attendance of 12,684, meaning the building was 1/3 empty. This, in a city that proclaims itself the Center, errr… Centre, of the Hockey Universe.

If the organizers in Buffalo aren’t concerned, they should be.

Granted, Buffalo and the Sabres pulled off the most successful World Juniors ever held on American soil back in 2010-2011. Over 300,000 tickets were sold to the 28 games in Buffalo and Lewiston. Hotels, bars and restaurants in the downtown core were packed throughout the event, mostly by visiting Canadians who descended on our community in full throated support of their nation. The epic final match, where Canada collapsed in the third period, surrendering five goals to Team Russia and losing 5-3, is still being talked about years later.

Buffalo managed to beat out some pretty tough American competition to be named the host in 2017-2018, a designation which comes to a US city but once every seven years. We did it by offering the Key Bank Center and HarborCenter as the joint venues, bringing the World Juniors to one location and campus. Second, for the very first time an outdoor game will be played at the tournament, featuring USA and Canada at New Era Field on December 29.

Nonetheless, based on the Toronto experience some red flags need to be addressed and considered now to help make the 2018 World Juniors a hit next year, and put Buffalo in the drivers seat for yet another return visit in 2025…

Ticket prices must be reasonable. Hockey Canada recognized their mistakes in excessive pricing for the 2015 event in Toronto and Montreal and slashed ticket prices accordingly this time. Not enough apparently. For most games on the schedule in both Montreal and Toronto, a ticket could be purchased for as low as $5/US. Even at a minimal price point, perhaps a game involving Slovakia taking on Switzerland is just not that interesting to anyone but the most die hard of fans. Hence. HarborCenter and its 1800 seat rink, which should suffice nicely.

Back in 2010, the Sabres marketing efforts initially executed a brilliant sales tactic, introducing all-session game passes and inferring that there might not be any tickets left unless fans made the commitment to invest in buying tickets to all the games.

It was all a ruse. Tickets were readily available to all the games, and even for the finals, the Sabres quietly papered the house by offering a half price Christmas ticket offer to their season ticket holders for the championship match.

Advertising now claims that buying an all session pass is the only way to be guaranteed entry to the outdoor game at New Era Field. Don’t fall for it. Outdoor games are no longer a generational event, and are staged all over all the time. This past week in Toronto, the Leafs held an outdoor game at BMO Field on the CNE Exhibition grounds. With a money grab price matrix starting at $229/Cdn plus fees per ticket, many passed, and a day before the game hundreds of tickets were still available at the primary sales site.

The lesson here? Do not overreach on single game ticket prices, especially for the outdoor game. People will come, but not at any cost.

The Canadian dollar. Last time the World Juniors came to Buffalo our two currencies were roughly at par. Right now the US dollar trades at approximately $1.34 Canadian, with most financial experts predicting that gap will widen in 2017. Most observers in Toronto claim that their weak dollar won’t deter Canadians from making the trip. But it might deter them from staying a while and spending money. Reaching that audience and offering reasons to stay might be a challenge.

Hosting a Fan Fest. Back in September when the NHL and the players staged the World Cup of Hockey in Toronto, a huge and successful fan fest took place in the city’s Distillery District. No such festival was staged for this World Juniors. Keeping weather challenges in mind, Canalside offers a perfect backdrop for just an event. If done right, Riverworks could also be a huge component as a host headquarters for Team USA or Team Canada.

No doubt that Buffalo will be up for the task and may even provide a template for how the IIHF plans and stages their showcase tournament moving forward.  But for Hockey Canada, they may wish to rethink how and where they host the event in the future, with an eye towards midsized cities such as Saskatoon or Halifax.

That being said, where is the 2019 host location? Vancouver and Victoria, BC. Plenty of good seats available.

THE SABRES AT MID SEASON
2016: THE YEAR IN SPORTS By Andrew Kulyk and Peter Farrell
Comment