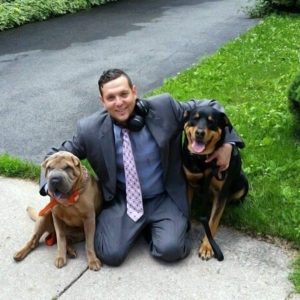 On February 2, 2017, Artvoice reported that Buffalo Police Officer Mark Vara was accused in a civil suit in U.S Federal Court to have grabbed a Buffalo woman from inside her home and threw her on the concrete sidewalk after handcuffing her.

The woman, Christine Townsend, 43, of Buffalo, originally called police for help because a pair of threatening, unleashed pit bulls were trying to get into her home.

Vara is accused of pulling Townsend, a registered nurse and animal rescuer, from inside her Riverside home and pushing her down her porch stairs. She fractured her ankle.

Vara, in his deposition in the lawsuit, admitted he had three complaints against him during his nine years as a tenured police officer that did get the attention of Buffalo Police Internal Affairs.

On September 29, 2016, in deposition testimony, Townsend’s attorney, civil rights attorney, Matthew Albert, asked Vara what the nature of those complaints were.

Vara responded that they were “usually just like verbal.”

But Vara chose not to further answer questions about the nature of why he was investigated saying only that the complaints made my citizens against him were determined to be unfounded by Internal Investigations of the Buffalo Police Department.

Albert deposed Buffalo Police Officer Kelly Craig, Vara’s partner, who admitted she had been with him on one or more of the incidents in question where he was accused of excessive force and/or misconduct.

When questioned by Albert, Craig said she did not remember any specifics of Vara’s conduct at that time.

In fact she was able to recall very little of many events and at one point she swore she could not recall her phone number at the time of the incident.

In addition to complaints by citizens, Vara admitted he received scrutiny from Internal Affairs relating to his “time at work”.

Albert filed a motion to compel disclosure of Vara’s Internal Affair records since it directly relates to what is alleged in the Townsend lawsuit – an allegation that a police officer abused his authority and created harm to a citizen.

The motion to compel is pending before the Honorable Magistrate Judge Kenneth Schroeder, Jr. in the Western District of the United States Federal Court.

On Feb. 15, the Investigative Post reported that Buffalo Police officers avoided discipline in 58 out of 62 complaints against them for excessive force by civilians during a three-year period.

In her lawsuit, Townsend is also suing Buffalo Police Chief Daniel Derenda who, as policy maker, is accused of creating a culture of covering up for the misconduct of officers by not investigating complaints of wrongdoing properly.

Albert issued a subpoena for Derenda to be deposed on these matters in connection to the Townsend civil suit for his appearance on Friday, March 3, 2017; however, Assistant Corporation Counsel David Lee has advised Albert he intends to file a motion seeking to quash the subpoena.

“Efforts by the city’s law office to aid city officials avoid questions of accountability is wrong, and unjust” said Albert. “The city spends taxpayers’ money trying to hide the truth, delay lawsuits, and avoid having politicians and police officers answer questions. It is one thing to defend the case on the merits. However, the city routinely seeks to avoid having police officers answer questions relating to alleged misconduct, which frankly, is fascist and cowardly, and not a transparent or even legal way to operate city government.”

In another high profile and ongoing civil rights lawsuit, Buffalo Peace Officer Matthew Jaskula was caught on camera severely beating an inmate in his care and custody who wasn’t resisting. The City of Buffalo fought to  keep that video from being released to the public.

Last week, New York State Supreme Court Justice Tracey Bannister agreed with the city and ruled the video could not be released until Jaskula’s criminal case is over.

Albert said he plans to announce every act of police misconduct, including the fact that the city is dishonoring subpoenas and directing officers not to testify and instead seek protective orders and preferential treatment over the rest of the citizenry.

The city has yet to answer Albert’s motion to compel in the Vara deposition.

“One thing is certain,” Albert says, “the city will not turn over any piece of evidence in accordance with the law unless they are absolutely forced to do so.”