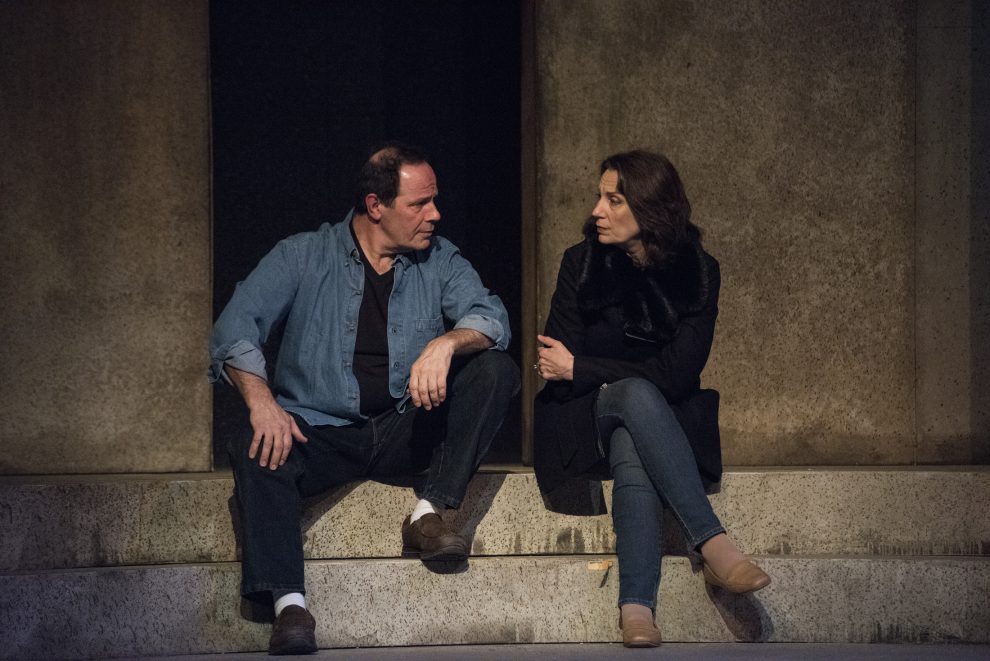 Arthur Miller’s A View from the Bridge is the story of Eddie, a man whose possessive desire for his own niece prompts him to betray his family and community in order to keep the young woman from marrying. In his program notes for the Kavinoky Theatre’s engaging production, director Robert Waterhouse evokes the original 1956 production directed by Peter Brook. He stresses that after that staging, which employed a stylized realistic set, subsequent versions have gone on to emphasize the realism of the piece in meticulous detail, rather than its grand tragic gesture. I would argue that this assessment is somewhat disingenuous, as the director is leaving out one hugely influential and distinctly non-realistic staging of the play — the minimalistic 2014 London production by Belgian director Ivo van Hove.

I do not mean to propose that the Kavinoky production reproduces Mr. van Hove’s staging – it does not. Its influence or inspiration, however, is palpable and important. Van Hove is credited with stripping Miller’s work down to its raw and primal emotions, and with tossing the action into the stark arena of confrontation and desire. Waterhouse suggests that he can claim the minimalist gesture as his own attempt to give the play contemporary resonance. Of van Hove’s work, Ben Brantley of the New York Times effused, “following a formula that has proved golden for him in recent seasons, Mr. van Hove divests a historical work of period associations, the better to see its inhabitants as timelessly tragic and as close to you and me as the people in the seats next to us — or, if we’re honest, as our fallible selves.”

It is intriguing to note that this appraisal is directed not at van Hove’s triumphant production of A View from the Bridge, but at his even more recent Broadway production of Miller’s The Crucible. (The Kavinoky has announced a production of that play for next season – again to be directed by Mr. Waterhouse).

Of A View from the Bridge, Mr. Brantley wrote, “Mr. van Hove … the contemporary theater’s most celebrated exponent of maximal minimalism, has stripped stark naked Miller’s 1956 drama of a self-imploding Brooklyn longshoreman. And what he and his cast … find beneath the play’s period trappings and kitchen-sink naturalism is a pure primal force.”

The Kavinoky production sets out in a different direction, in search of direct contemporary resonance that highlights the issue of illegal immigration, rather than the primal force of an inappropriate desire. Here, minimalism is augmented with some literal and anachronistic contemporary gestures: a mobile phone; immigration officers who sport ultramodern firearms. Far from providing added insight, I found these choices to be distracting and to diminish the power of an otherwise strong production. A scene in which immigration officers burst into a family home, lacked dramatic impact and seemed casually, even awkwardly staged. The assumption seems be that dots of laser light from the focuses of fancy assault weapons would generate more excitement than the well-considered actions of vividly drawn characters. They don’t.

To place so much emphasis on the immigration issue, rather than on the broken taboo and betrayal it represents, is a miscalculation. The issue of immigration is a forbidden boundary in this play; not the central focus.

Apart from this distracting detour, however, Waterhouse has guided his well-chosen actors to some superior performances. 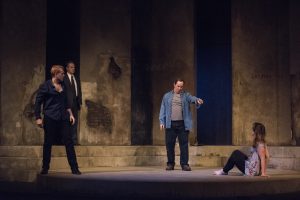 As Eddie, the “self-imploding Brooklyn longshoreman,” John Fredo gives an affecting and even sympathetic performance. Here is a man who has raised his orphaned niece Catherine, played by Renee Landrigan, as if she were his own child. Now that the girl has grown into womanhood, Eddie’s wife Beatrice (Debbie Pappas) begins to observe that her husband’s affection for their niece is rather too intense, too tender, and too possessive.

“I told you fifty times already,” warns Beatrice. “You can’t act the way you act. You still walk around in front of him in your slip…. I mean it.”

It is too late. The illegal immigration of cousins from Italy, and the attraction between Catherine and younger of these two brother, played by Adriano Gatto, is more than Eddie’s burning jealousy can bear. His resentment and his imagination now consume him.

Any man who has ever been startled to see the child he has raised in her first womanly evening gown, recognizes the seed of Eddie’s dilemma, and of his tragedy. This man whom we will mourn with a certain alarm, is unable to appreciate a woman in a context that is not eroticized or servile. Neither can he see other men in a manner that is not potentially competitive.

I found it especially notable that all of the actors in this production make excellent use of their characters’ inability to express their thoughts and desires. Eddie lashes out physically when he cannot speak a desire he can neither acknowledge nor understand. Fredo skillfully communicates each of these moments beautifully. This actor understands the power of physicality – both of motion and of stasis.

Along the same lines, the Italian cousins, Rodolpho and his older brother Marco, speak English only haltingly. Rodolpho expresses the joy of his life by singing. Marco communicates an ominous warning to Eddie, simply by lifting a chair. Gatto as Rodolpho and Adam Yellen as Marco, mark these moments with skill, which makes the times when they do speak, all the more arresting in their power. Yellen’s delivery of the powerful yet simple condemnation, “That one! I accuse that one!” is chilling. 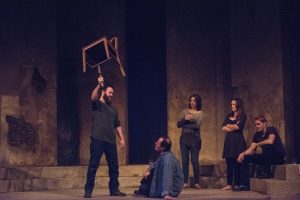 Their status as women implicitly curtails the ability of Beatrice and Catherine to express themselves. The two women can only express their profound frustration and confusion at the trap in which they find themselves when they are together alone. Pappas’s Beatrice, in her efforts to negotiate around Eddie’s patriarchal privilege, scores small inroads and victories where she can, demanding her rights as a wife, even as Eddie insists upon his “respect,” but to no avail. As Catherine, Landrigan is left in silence on stage for prolonged stretches. These struggles serve to accelerate the tension of play, as Pappas and Landrigan give a lesson in the acting that happens when a character cannot speak or take action. The framing device of the play is omniscient narration by Alfieri, a neighborhood lawyer, who stands in for the audience like a Greek chorus. Alfieri is arguably the most difficult role in the play, and one that can come across as awkward or stilted. This character, played by Peter Palmisano, recognizes the inevitability of the tragedy that looms ahead. Unlike everyone else on stage, Alfieri is notably expressive and eloquent, delivering lines like, “This is the gullet of New York, swallowing the tonnage of the world.” While he begins as narrator, Alfieri will enter the action and become the sympathetic but unyielding confidante to Eddie – it is a powerfully discordant mismatch. Palmisano plays the role with the sober dispassion of a judge, in a performance notably devoid of affect.

I greatly admire the handsome minimalist set by David King, a more literal version of a Greek arena staging than in the van Hove production, set among the walls of a Redhook warehouse, well lit by Brian Cavanagh, with effective costumes by Annette Christian, and a highly dramatic and evocative sound design by Geoffrey Tocin.

The Waterhouse production is bold and quite beautiful in its execution, and successfully communicates the power of an Arthur Miller work that has only come to be appreciated fully in recent years. A View from the Bridge continues through March 26th.