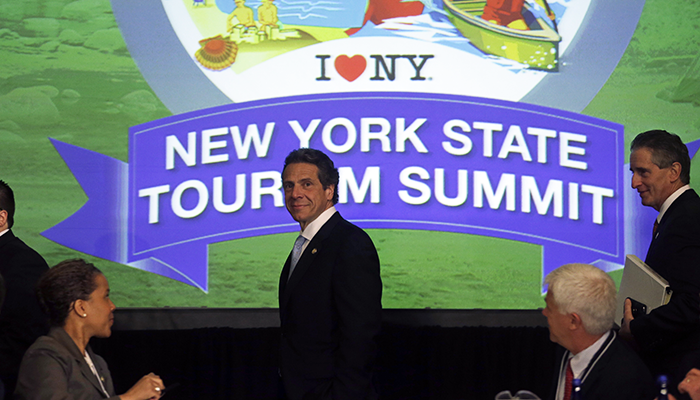 As we reported previously, Gov. Andrew M. Cuomo is in a battle with federal highway officials over state-funded “I Love New York” billboards scattered along highways in New York State.

The signs are meant to inform motorists about a state-funded phone app which guides people toward state selected tourist attractions and businesses.

Federal officials say the signs pose a threat to motorists with poor self preservation instincts who might download the app while driving.

Initially New York State officials told the public that the signs cost taxpayers $1.9 million. The controversy with the feds however stirred further-than-usual inquiries by the media and subsequently the state admitted the cost for the signs was $8.1 million not $1.9 million, uncovering the fact that in this one instance the state was more than 400 percent off in the numbers they initially told the public.

However, statistics, cited from reports state officials authored, based on criteria they established, prove taxpayer funded signs, at whatever the cost, as well as taxpayer funded advertising, dramatically increase tourism in New York, which is the highest taxed state out of 50 competitors.

In another equally reliable estimate, state officials say that taxpayer-funded tourism advertising is responsible for 234 million visitors coming to the state in 2015 – which number is actually about two thirds of the US population.

“If you look at the return on our investment, it has been extraordinary,” Cuomo said of his advertising program. “One of the great economic engines for upstate New York is tourism.”

Much of the taxpayer money spent on attracting tourists to New York State is spent within the state and advertising campaigns are coupled with media releases that credit Gov. Cuomo as leader of the initiative to promote tourism in New York.

When he ran for reelection, Gov. Cuomo directed $230 million in taxpayer money for radio and TV commercials depicting New York State as a destination for tourists and business. While some ads appeared in other states, ads aired within the state cheered voters with glad tidings of how the state was experiencing sudden, remarkable, unprecedented growth and improvement.

Empire State Development, the state’s economic-development agency, whose officers are appointed by the governor and serve at his pleasure, gave Gov. Cuomo full credit for the success of the program and for increased tourism, explaining that Governor Cuomo “revitalized the state’s …tourism efforts.”

Pulling figures from out of reports, authored by state officials he appointed, Cuomo stated that the “I Love NY” program, which costs state taxpayers $50 million a year, coupled with another $50 million in TV and radio ads promoting New York State’s overall success, brought in an additional $8 billion in revenue for the state in 2014.

“Now, if we can get a return on investment where $100 million increases revenue $8 billion, I would do that every day,” Cuomo said in a video during a state funded Tourism Summit near Albany.

The governor’s revelation that the state achieved an 8000 percent return on taxpayers’ investment may be the best use of taxpayers’ money as stimulus in US history. The only return on investment known to exceed it are rate of returns donors to Cuomo’s campaigns get in state subsidies, according to comparisons of Empire State Development and New York State Board of Elections records.

Cuomo is expected to run for reelection next year.

State officials, whose useful service to the state would cease should a Republican governor win office, are expected to warn the public that if Cuomo is not reelected, the 234 million tourists (which by the way is two thirds of the population of the entire USA) who Cuomo officials now say come to the state each year, and spend $8 billion, because of $100 million in state advertising, may drop dramatically.

If, during the 2018 campaign season, as some $230 million in taxpayer funded TV and radio ads promoting tourism and the gains the state has made in recent years start to appear, state officials may be able to produce studies that will report that more than a billion tourists came to New York, spending $8 trillion, in 2017 alone.