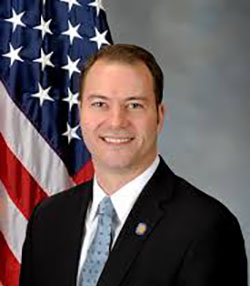 State Sen. Robert Ott (R.- North Tonawanda) is keeping up his offensive against State Attorney General Eric Schneiderman this week, claiming felony indictments filed against him last week should be dismissed because he was effectively blocked from addressing the charges against him during his grand jury appearance.

After the failure-to-file indictments were returned against him, Ortt, the former mayor of North Tonawanda, unloaded against Schneiderman, claiming the case brought by the Democratic attorney general (and former state senator) was politically motivated and he looks forward “to telling New Yorkers the truth about Eric Schneiderman and myself.”

Ortt and his predecessor, former State Sen. George Maziarz, were charged with a total of eight accounts by an Albany County Grand Jury and both have entered not guilty pleas and vowed to fight the charges.

According to the attorney general, Ortt devised a pass-through scheme to pad his public salary by having the Niagara County Republican Committee send checks totaling $21,5000 through a third party for a no-show job for Ortt’s wife, Meghan.

On Wednesday, Ott’s attorney, Stephen Coffey, filed a motion in Albany County court to dismiss the charges against the senator, saying in effect Schneiderman’s-run grand jury blocked the senator from addressing the charges for which he would later be indicted during a voluntary appearance without immunity.

As for Maziarz, the 19-year former senator from Newfane who was a long-time Republican leader in Niagara County and throughout his former senate district, his attorney repeated what he said last week after Maziarz was indicted for allegedly secretly paying a former staffer, Glenn Aronow– who was facing sexual harassment civil charges– $95,000 in order to keep him on his campaign staff and out of public view.

Buffalo-based attorney Joseph LaTona, who has represented Maziarz for many years, said again Wednesday that “we are looking forward to vigorously defending this case in court.”

Schneiderman said through a spokeswoman on Wednesday that Ortt’s dismissal motion “contains a number of errors and omissions that we will address in our response.”

A spokesman for Ortt on Wednesday said the dismissal motion “is the first step in exposing Eric Schnedierman’s political and false charges.”

Andrea Bozek said in a statement that “Rob and Meghan paid all appropriate taxes on the retainer and fully disclosed it on the only written instrument that he has ever been responsible for filing, his personal financial disclosure.”

Schneiderman said last Friday “the people of New York do not want to see no-show jobs and shadowy movements of money that are concealed from public view.”

Also caught up in the probe is long-time Maziarz aide and former Niagara County GOP Chairman Henry Wojtaszek who last week pleaded guilty to an election law misdemeanor count and who is expected to be a witness against Maziarz and Ortt should their cases go to trial.