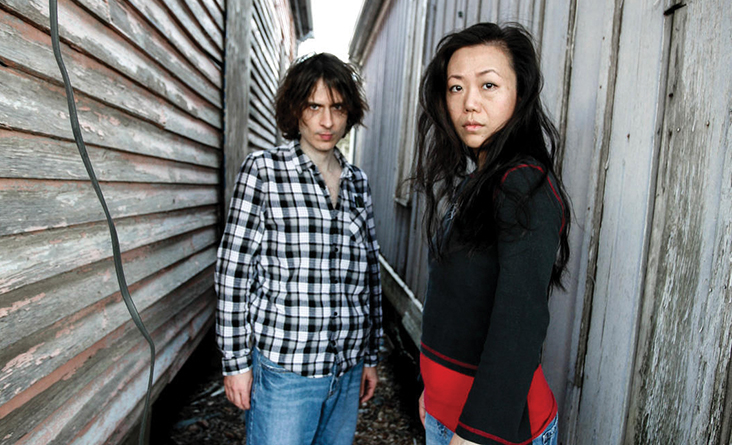 Primal Static is a duo from Austin, Texas with high-energy late-20s G.T. on vocals, guitar and beats and his diminutive Chinese-born bandmate HouFei on keyboard, bass, and pianos. While G.T., the band’s songwriter, is a self-taught wild kid who just loved rock and roll, HouFei is a conservatory-trained pianist who was in the midst of getting her doctoral degree in piano at the Peabody Conservatory when she met G.T. Now she’s a budding rock ‘n roller.

The two together have formed an unlikely pair that led to a partnership that has already seen one EP, 2015’s In the Surface, receive national airplay on college radio stations.  The album even snuck into CMJ’s Top-200.

Their live shows are smart and entertaining and the duo has been slogging through the traditional rock ‘n roll see-America-in-a-cramped-station-wagon tour–jammed in with their guitars and keyboards.  A quick look at their tour schedule shows them traveling from Texas to Maine and all points in between, but the gigs always seem to be in the hippest spots, although only locals would know that. They’ve been playing in little corner clubs the size of a two-car garage with a pool table and a stage; coffee shops, art galleries, a renovated church––pretty much any place that’s cool and will have them.  The Sugar City Arts Collaborative is perfect for them, small, artsy and hip.

Although their sound is primarily alternative rock, the band also infuses blues, trance and any other music they’ve been influenced by.  Their Twitter page describes their style as a “rock band with their feet way in the blues bouncing on electro beats.”Also on the Sunday night bill are  local bands The Orange Friction, The Good Neighbors, and Johnny and the Man Kids.

NEWS OF THE WEIRD
CLASSICAL PREMIERES: Old & New The BPO and the Camerata feature area first performances BY JAN JEZIORO