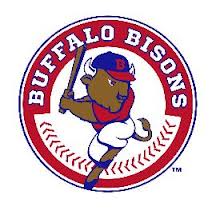 In this week’s print edition of Artvoice, Play Ball reviewed last week’s awful sequence of weather events which made for a terrible time attending games at the ballpark. Despite all the rain, the team managed to get in five of the six scheduled games, all resulting in seven inning doubleheader configurations, and all the games played before a literally near empty stadium.

With spring finally on the way here in Western New York, the team is throwing everything but the kitchen sink to bring fans back to the ballpark and finally enjoy a night (or day) of Bisons baseball the way it should be experienced.

To start with, the team is offering a “No Rain Guarantee”. If during any of next week’s games there is any measurable rainfall, even if not resulting in a weather delay on the field, fans can exchange their ticket to that game for TWO tickets to ANY game during the month of May. Additionally, any unused tickets that fans might have stored way for any of the games played so far in April or May can be exchanged for two tickets to any remaining game in the month of May.

But there’s more. Lots, lots more. The team has also added a vast array of bonus giveaways, specials and promotions which will be good throughout the coming week’s homestand. They are:

Sunscreen Giveaway to the first 1,000 fans at each game.

20% OFF all Bisons Caps in store to help with all the sun we’re going to have.

The Canadian Cash ‘At-Par’ policy has been expanded through Friday, May 19, allowing Canadian fans to use their cash ‘at-par’ at the ballpark for the purchase of single-game tickets and concessions

On McDonald’s ‘I’m Lovin’ It’ Thursday’ –May 18- first 2,000 fans receive a coupon
for a FREE Signature Crafted Sandwich at their local McDonald’s

BONUS Dog Day at the Ballpark on Sunday, May 21 –ALL DOGS FREE
Presented by Camp Bow Wow, Tonawanda location

With temperatures sunny and heading to the 70s, fans should be looking forward to next weekend’s special Toronto promotion. Saturday, May 20 and Sunday, May 21 is the team’s annual “Blue Jays Weekend”. Fans can get in the ballpark early on May 20 (11:30 a.m.) for a special autograph session with Blue Jays’ greats Tony Fernandez, Jesse Barfield and Duane Ward. On Sunday, May 21, the first 3,000 fans receive a free Bisons Picture Frame (Gates at 12 p.m.). The game will also feature an appearance by the Blue Jays’ mascot, Ace.

So there you have it. The Bisons have a competitive team under new manager Bobby Meacham and are right in the thick of things in the division standings in the competitive IL North Division. The sun is shining and the grass is green. See YOU at the ballpark!