It’s all about the merchandising

Can you even imagine the Buffalo Bisons, a staid franchise and baseball brand here in Buffalo going back almost a century and a half, all of a sudden changing their name to some crazy moniker? Just like that, all the tradition, all the familiarity, all the components that fans have come to know and love. Poof! Gone in an instant.

The purists would howl.

Yet a number of teams across the spectrum of minor league baseball, some quite close to home, have done just that entering the 2017 season, eschewing history and tradition, or in some cases, just starting new traditions of their own.

In 2008 the Ottawa Lynx of the International League relocated to Allentown, Pennsylvania, and a new ballpark, and quickly became the “Lehigh Valley Iron Pigs”. It was a name and a jersey that was not at first embraced by the fans in that region.

Like many franchises do in these situations, a fan “name the team” contest was set up, and the name Iron Pigs was the winner. 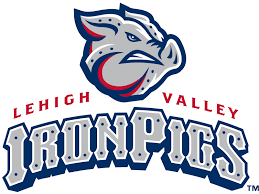 But what exactly is an Iron Pig? Well, nothing really. Not even, unfortunately, a snarling, steely pig like the logo suggests. The name is an intentional butchering of “pig iron,” which is the raw iron that gets melted down to make steel. The term refers to the rows of ingots on the conveyor belt all attached to a single runner, which was thought to look like a litter of suckling piglets. Over the course of the 19th century, iron production grew to be the Valley’s leading industry, helping drive the country’s railroad and skyscraper construction.

When the name was announced in 2006, IronPigs president Chuck Domino had this to say: “We chose a name that bonds the Lehigh Valley’s steel-making heritage to the fun of the Minor Leagues and also the way we plan to operate the franchise, which is boldly with an emphasis on a uniqueness that will set the Lehigh Valley IronPigs apart from anything that the people of the Lehigh Valley have previously been exposed to.” 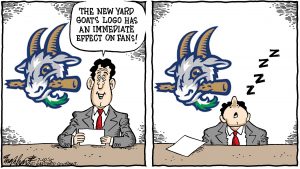 This adds to the Pensacola Blue Wahoos (AA), who arguably have the best ballpark in the Southern League, offering resplendent views of the Gulf of Mexico. They pack ‘em in down there.

So as strange and funny that these names all sound to the uninitiated, there is actually a deep meaning to all these name changes, and how they embrace some element of their host community, just as the IronPigs do in Lehigh Valley.

In Binghamton, where their AA team has been beset with woeful attendance, the team tried a new branding, embracing the city’s status as one of the largest carousel manufacturers in the world. If one checks out the new logo, it looks quite handsome, and the franchise is hoping for a new resurgence in team interest and attendance.

One of the alternative names rejected during the process? The “Stud Muffins”. Go figure.

Down in New Orleans, the transplanted Zephyrs from Denver remained the team’s nickname for quite a while. But this year, the team went with “Baby Cakes”, representing the King Cake which is a treat eaten on the religious holiday of the Epiphany. The cakes are also synonymous with Mardi Gras celebrations in the city.

But the team logo is a fat baby wearing a crown and holding a black baseball bat. No sign of cake anywhere.

Down in Jacksonville, there was no fan input, no media input, no contest. The ownership just announced one day that the team’s new name moving forward would be the “Jumbo Shrimp”, eschewing a tradition of Suns baseball that went back to 1962. To add to the drama, the timing of the announcement came the same day as Game 7 of the World Series, now regarded as one of the most storied games in baseball history.

The blowback was immediate. And harsh. A petition signed by over 10,000 fans was presented demanding that the team return to the Suns nickname.

The team doubled down on their decision, immediately promoting and selling a t-shirt with the new Jumbo Shrimp logo and the message “Haters Gonna Hate”. They branded the team in patriotic red white and blue colors to soften the blow. No report on how many of those shirts were actually sold.

This past week, Minor League Baseball released their top 25 list of teams with the strongest merchandise sales, a business which in total set a record in 2016 with $68.3-million in sales.

“Minor League Baseball team names and logos continue to be some of the most creative and fun in all of professional sports and are valuable marketing tools for their clubs,” said Sandie Hebert, Minor League Baseball’s Director of Licensing. “Each year a few teams choose to create new identities and it’s always interesting to see the fan reaction and how that translates into merchandise sales.” 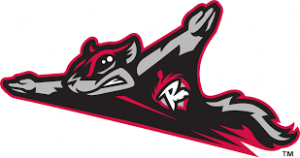 None of the crazy nickname changers made the top 25. The Richmond Flying Squirrels (AA) were the one franchise to crack that ceiling.

Neither did the Buffalo Bisons. But keep it classy Bisons. Your fans and your city love you just the way you are.