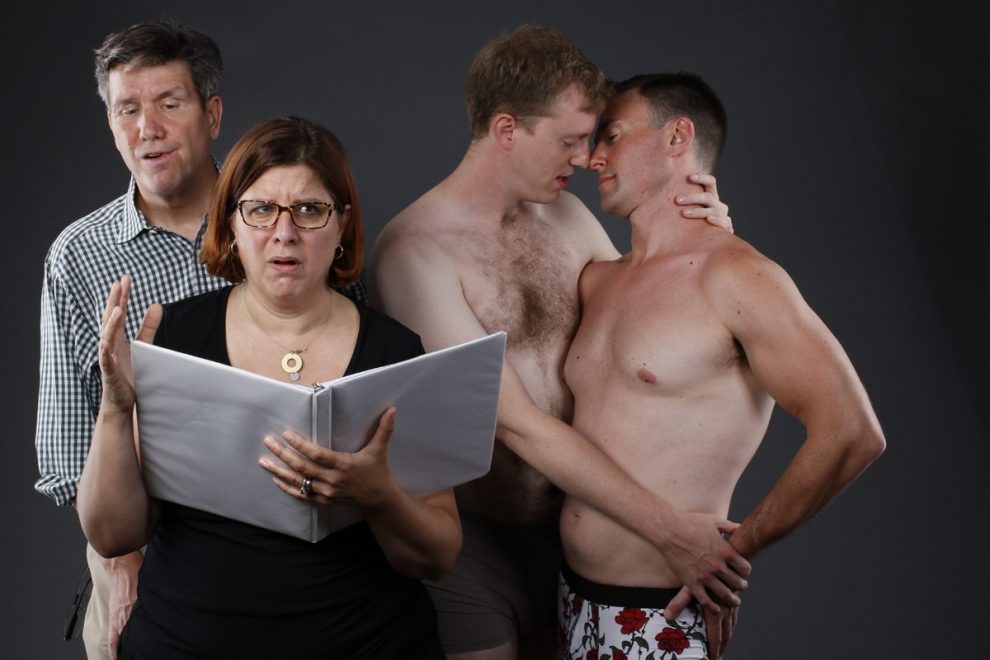 Donna Hoke’s new play, Sons & Lovers, is a clever little invention about a middle-aged woman named Ellen who is at a crossroads in her life.  Hoke has positioned her female protagonist between two tales of desire, neither of which is her own. On the one hand, there is her son’s desire for another man; on the other is her husband’s desire for other women.  She is in denial about both.

Ellen is turning 50, and has a strong sense that her best years might be yester. She fills the void with delusions that her airplane mechanic husband yearns to return from his conveniently frequent business trips to the comfort of her homemade cookies, and that her son’s elusive significant other might be the mother of her future grandchildren.

The sly device deployed by the playwright is that this is the story of a woman coming to terms with her own life, disguised as a man’s coming out story. The shift from one narrative to the other is sophisticated and artful. Somewhere along the line, it occurs to Ellen that her most important delusion is not about her husband’s affairs or her son’s lover (was she ever really as clueless as she claims?) but about her own dreams.

The script was developed specifically for Caitlin Baeumler Coleman, who performs the role with deft comic timing and affecting nuance, even (and perhaps especially) when she navigates two fantasy sequences in which real life is heightened by the thrilling power of her unfulfilled needs, and in other scenes, in which reality itself takes on a fantastic quality. In each of these scenes, Ellen interacts with a man who serves to elevate her feelings of self-worth, and to excite the idea of a life full of possibility. In the scenes of pure fantasy, she is startled to observe that the men resemble her husband; in real life scenes, she notes a charming hairdresser and a flattering waiter’s resemblance to Mark, the man she believes to be the brother of her son’s lover “Marquesas.” In reality, her husband has lost interest in her; and there is no girlfriend. There is only Marquesas, who is not a woman.

As Ellen zeroes in on the truth of her situation, the layers between her delusions and her reality slip away. Mark is her son’s lover, not the brother.  Her husband is working on more than airplanes. She does not want a Hawaii theme party; she wants real life experiences, dammit!

Late in this short play (80 minutes – no intermission), the son offers his mother one final fantasy – the possibility that her marriage might be saved. Her one word answer is quiet, and in its simplicity, powerful.

The men of the cast: Steve Brachmann as the evasive son; David Granville as the distant husband; and Peter Snodgrass who plays dreamy, if frustrated Marquesas (Granville and Snodgrass play all the other men in the play) do well to provide anchor and contour to Coleman while otherwise staying out of her way.

The play is admirable for its deceptive economy, and is a departure from Hoke’s other work in its cunning weaving of reality and fantasy. With this interplay of truth and illusion, Hoke arguably evokes such current writers as Sarah Ruhl or Paula Vogel, women who often locate the untold stories that lie just beneath the surface of what seems to be going on. The play continues for one more weekend.

REVIEW by Anthony CHase: THE QUEER WORLD OF Noël Coward’s DESIGN FOR LIVING at Irish Classical Theatre
ON THE BOARDS: What’s on Stage in Area Theaters