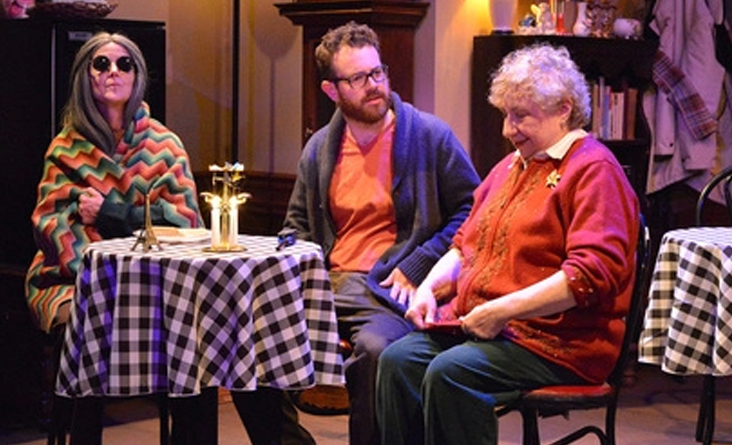 There is something ancient and forbidding about Annie Baker’s play, John, now at Road Less Traveled Theater. Even the title, which refers to the man who never appears in the play, but who makes frequent intrusions into the action, is somehow haunting, even threatening. The arrival of a blind character who speaks in prophecy and has hermaphroditic dreams evokes Tiresias and Greek fate.

Jenny Chung and Elias Schreiber-Hoffman arrive at a bed in breakfast in Gettysburg, Pennsylvania. They say the weather has slowed them down, but maybe they have been fighting. They are greeted by their host, Mertis Katherine Graven, a sweet older woman with a fondness for both kitsch and surprisingly deep aesthetic and philosophical reflection.

The play moves at a leisurely pace. Friction between Jenny and Elias is revealed gradually. Jenny has had an affair. With “John.” Every time Jenny gets a text message, Elias flinches.

The couple is trying to work things through. When menstrual pain prevents Jenny from touring the sites of Gettysburg, Elias goes on without her. He is annoyed. She seems relieved. To amuse ailing Jenny, Mertis invites her friend Genevieve, who is blind, to visit.

For the most part, this is a story told through indirect action. What does not happen. What happens when something else is supposed to be happening. We are moved by the accumulated effect of events, right up until the climax.

While the play is known for its slow pace, at times this production is plodding, as if it, too, did not know where it was going, or had no place to be. Still, we are engaged in powerful stuff, as the threads of these lives intertwine and unravel, we are invited to contemplate how our differences draw us together and push us apart.

The cast is very good, particularly Adam Yellen as Elias and Sara Kow-Falcone as Jenny, assuredly two of finest leading players working in Buffalo theater today. They express the yearnings and aversions of their characters with palpable eloquence, giving a feeling of import to Annie Baker’s journey. I especially admire the natural rhythms of their speech, and the carefully calibrated rising and falling of emotion each is able to communicate.

Priscilla Young Anker, an excellent actress, equally suitable for character and leading roles has mostly gotten character roles in Buffalo. Here she plays Genevieve, the Tiresias or Greek prophet of the festivities. It is an oddly mannered performance, not helped by an inexplicable and distracting wig. She does land some wry one-liners to excellent effect, and brings clarity to the role.

Character actor Darleen Pickering Hummert has the daunting task of playing a role written for a unique theatrical personality. Annie Baker was widely praised for writing so beautifully for Georgia Engel, an actress best known as tinsel-voiced Georgette on the old “Mary Tyler Moore” show. Pickering Hummert successfully channels her own personality and humor into this complex yet loveable woman who serves as a sounding board for all those around her.

Ultimately John tells a story of incompatible needs. What happens when our own vulnerabilities clash with the needs of someone else, even someone we love. Seeing John is a powerful experience.

REVIEW by Anthony Chase: MY OLD LADY at New Phoenix Theater
ON THE BOARDS: What’s Playing on Area Stages