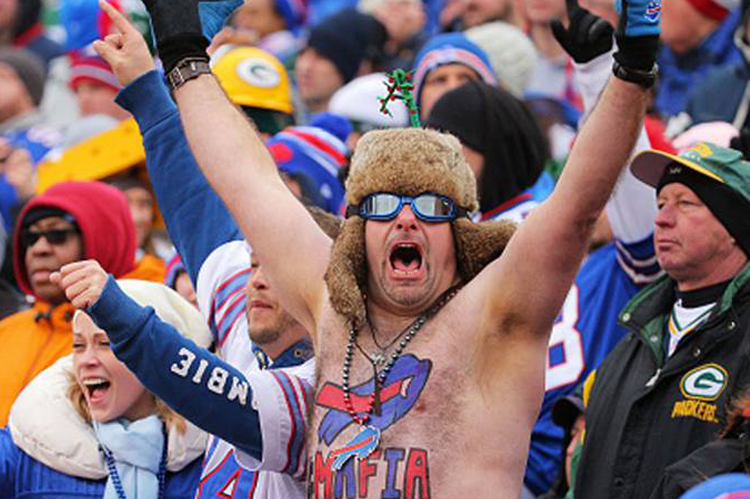 This evening, in a very bored tone of writing, the Buffalo News published the regular old list of events that happened at today’s Bills game, beyond just the team losing:
a man fell into a fire pit;
two pedestrians were hit by a car with one woman unresponsive and the other trapped under the tire of the car that hit them till fire and emergency medical teams extricated her;
a man who passed out behind the wheel of his car was arrested for outstanding warrants;
reports of a suspicious person netted another man with outstanding warrants;
a car was broken into and $1,000 was stolen;
there was an explosion after the game on Abbott Rd. outside the stadium;
that was followed by three Canadians north of the stadium hitting traffic signs and throwing traffic cones into the roadway;
at the same time, a bar near the stadium called for police assistance and a man was taken into custody.
The article ended with “Police also reported that they had numerous calls for car crashes, fires, fights, criminal mischief, intoxicated persons and other criminal acts, along with medical calls, mostly associated with excessive alcohol consumption.”
I’m not being critical of the concept of collecting 80,000 testosterone-fueled drunk football fans to gather to see Hail Mary’s, blitzes and pooch punts, or of so many police actions needed at a Sunday afternoon game. After all, I did some research and found that the police have been called to Shea’s Performing Arts Center, too. Yep, it was back in March 2015. An usher found a fully loaded handgun on the floor of Shea’s. How did it get there? An off-duty police officer owned the weapon and brought it, along with his family, to a performance of “Sesame Street LIVE!,”–that makes sense. Of course, there was an investigation and the officer said the loaded weapon must have fallen out of his pocket. I was told that Shea’s was thankful a five-year-old who went there to see Elmo didn’t pick it up and pull the trigger.
Anyway, getting back to the Sunday game. We can talk about the great Buffalo Renaissance till we’re blue in the face, but until the city, the Buffalo News and every TV and radio station in town establishes a value system that stops rewarding bellowing drunks as good guys and holding up the Buffalo Bills as something we absolutely need to validate us as a real city, all the renovated loft apartments and trendy cocktail bars don’t mean shit.