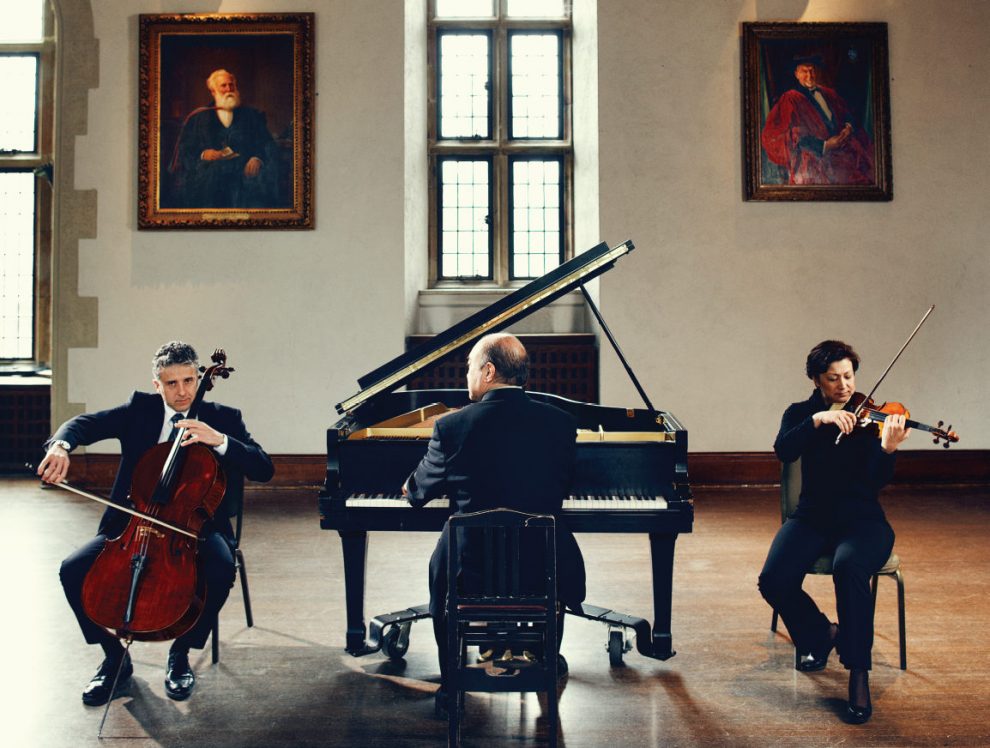 While they are probably driving from Toronto, the image is apt

The gryphon, or as it is more usually spelled, the griffin, is a legendary mythical beast, with the body, tail and back legs of a lion, and the head, wings and talons, for its front feet, of an eagle. Combining the regal attributes of both a lion, the king of beast, and the eagle, the king of birds, the griffin enjoyed the reputation of being especially powerful and was often assigned the role of guarding the most precious of treasures. Of course, the very greatest of our musical treasure heritage can only be safeguarded for not only us, but also for future generations by being performed.

This Tuesday and Wednesday evenings, the Canadian members of the Gryphon Trio, Annalee Patipatanakoon, violin, Roman Borys, cello, and Jamie Parker, piano, will offer performances of some of the greatest treasures in the classical music repertoire of works written for piano trio, by two of the greatest of composers, Ludwig van Beethoven and Dmitri Shostakovich. While the Gryphon Trio has appeared regularly at the annual summer music festival in Niagara-on-the-Lake, currently known as Music Niagara, this performance marks its first appearance on any stage in Western New York. The winner of two Juno Awards, the Canadian equivalent of the Grammy Awards, the Gryphon Trio is arguably the finest classical piano trio now performing in Canada.

The events are presented as the result of an ongoing fruitful collaboration between the venerable Buffalo Chamber Music Society, which is approaching its centenary mark, as the second oldest continuously presenting chamber music society in America, and the Department of Music at the University of Buffalo, which while it has long-earned a national reputation as a leading presenter of contemporary and new, cutting-edge classical music, has an equally well-deserved reputation as a promoter of the great tradition of classical music, especially through its annual Slee Beethoven Cycle, which for more than sixty years has presented performances of all sixteen Beethoven string quartets on a yearly basis, a distinction that no other city on the planet has come close to equaling.

On Tuesday March 13 at 8pm in the Mary Seaton Room of Kleinhans, the Gryphon Trio’s program includes Beethoven’s Piano Trio in C minor, Op.1, No.3, and his Piano Trio in Eb major, Op.70, No.2, as well as the Shostakovich Piano Trio No.1 in C minor, Op.8, a work that has never been previously performed in the ninety plus history of the society.

Wednesday March 14 at 7:30pm, the Gryphon Trio moves to Slee Hall on the UB Amherst Campus. The Slee Hall program includes Beethoven’s Piano Trio in E-flat Major, Op.1, No.1 and his masterpiece in the genre, the Piano Trio in B-flat Major, Op.97 ‘Archduke’, along with Shostakovich’s devastatingly powerful work composed in 1944, his Piano Trio No.2 in E minor, Op.67, ostensibly composed to honor the memory of his friend who died unexpectedly, but also a chilling tribute to the tens of millions of victims of World War II.