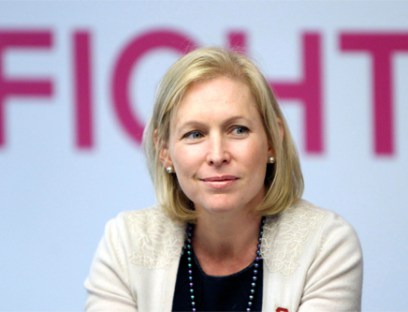 Even more troubling, Gillibrand stood firm in her opposition to the Taylor Force Act, bipartisan legislation that would withhold significant federal aid to Palestinian leadership unless they cease payments to families of terrorists convicted in Israeli courts. The legislation, named after US citizen and West Point graduate Taylor Force, who was killed by a West Bank resident who went on a stabbing spree in Jaffa Port in March 2016, was included in the budget resolution.

“Kirsten Gillibrand voting against the budget, while taking credit with voters, is business as usual, but her opposition to the Taylor Force Act is disgusting. We can no longer reward the Palestinian Authority’s pay-to-slay support of terror — it is inconsistent with our values as New Yorkers, Americans and undermines our ally Israel,” said Farley.

Payments by the the Palestinian Authority to families of those imprisoned in Israel for carrying out acts of terror provides an incentive for other would-be assailants to carry out additional attacks.

Farley added, “That U.S. taxpayer dollars were ever underwriting supporters of terror is unconscionable. Kirsten Gillibrand’s lurch to the left for 2020 isn’t just bad for New York: It makes us all less safe and compromises our must trusted ally Israel.”

The Consolidated Appropriations Act Gillibrand voted against would also invest approximately $5 billion in opioid treatment and prevention, represents the largest boost to military and defense funding in 15 years, contains increases to funding for law enforcement agencies, and funds the University of Rochester’s laser laboratory, among other New York State projects.