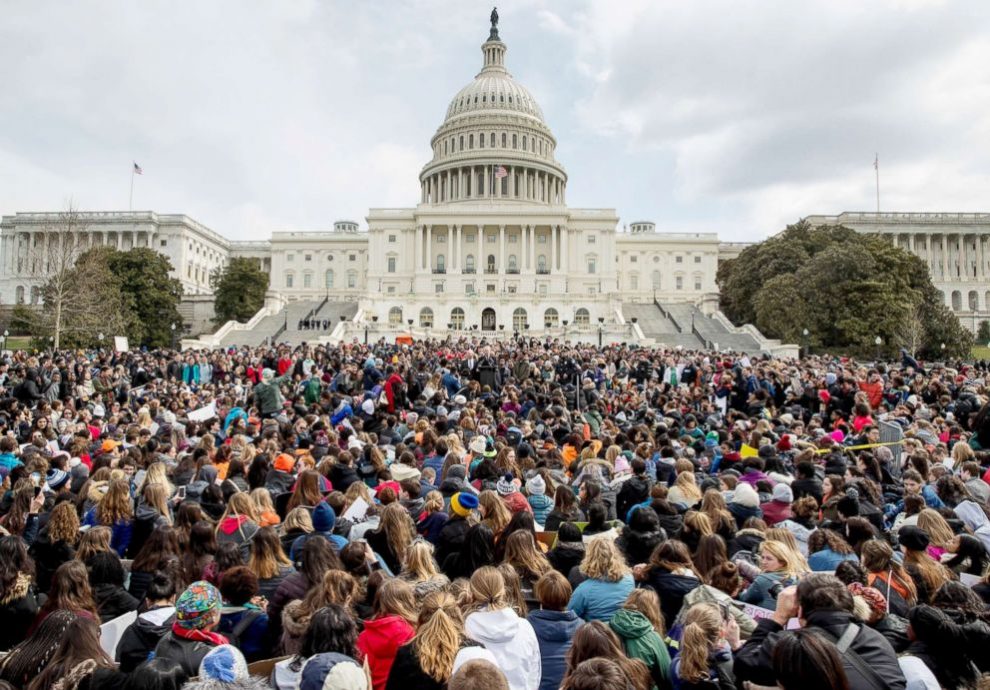 The March for Our Lives was almost entirely organized by the leaders of Marjory Stoneman Douglas High School. The event on Saturday, March 24, 2018, drew hundreds of thousands of people to Washington D.C., and it inspired other marches in cities such as New York, Los Angeles, Boston, and Seattle. What a success it was!

The message was immutable and on point, and there appeared to be a spiritual passion emanating from the crowd that cannot be easily faked or forgotten. Among the highlights from the day included the adorable and powerfully symbolic speech by Martin Luther King Jr’s granddaughter, Emma Gonzalez’s haunting moment of silence, the Newtown display of solidarity, the numerous testimonies of gun violence survivors, and Jennifer Hudson’s incredible rendition of “The Times They Are A-Changing.”

One thing is for certain now. Politicians in both the House and Senate are paying attention to this movement in a way that they were not 24 hrs ago. In just 5 weeks this movement has evolved from an impressive collection of grieving student activists to an international call to action by a multitude of super organized, highly energetic and technologically superior activists working together across the planet.

That said, I do have a few words of unsolicited advice for my young brothers and sisters. I offer these insights directly to them in a spirit of gratitude. What I have to say comes from nearly two decades of experience working in the world of social justice activism. Some of these movements include the Poor People’s Campaign in the early 2000’s, anti-war advocacy since I was in seminary, the homelessness rights movement, the People’s Climate movement, Ferguson and the police reform movement, as well as numerous efforts related to grassroots politics and principled nonviolence. In my experience I can predict that you will face at least four major obstacles as your movement develops and expands.

First and foremost, there will be a host of individuals and groups that will attempt to co-opt your work on gun violence reform. They will come in different shapes and sizes, but rest assured that they will come to take away what you have built. Unfailingly, the advertisers will try to make money off your brand. Although they will spin it as marketing for the cause, the truth is they only care about profits. There will be co-opting from politicians who will say they were for gun regulation all along- or that they are the ones who have the power to make change happen. The co-opting will even come from organized religion in the form of moral authorities justifying the right to kill and be killed; and from parents and teachers who will say they are the ones who need to step in and take over once the backlash occurs. Be on guard. Do not get sidetracked. Stay focused on what you came to achieve. Accept no substitutes for real change.

You will also be challenged by allies who say they believe in the strength of your leadership, yet in the back of their minds they have crippling doubts, unbreakable prejudices, and even thoughts of sabotage. On the outside they may utter the right words and seem to lend unconditional support, but inside they will harbor a relentless tide of distrust towards you. Despite their encouragement, they do not really believe in gun reform at all.

Certainly there will be a fading effect. That is to say, there will be activists who are committed now but will soon drop out. There will be fellow soldiers on the front lines who will inevitably lose heart, get caught up in irrelevant tasks, and simply go on to do other things. Even though we know that this is part of human nature, it still hurts when you see someone who you thought would always be with you just suddenly quit. Do not be discouraged. Others will take their place.

There will be power struggles within the inner circle of your leadership. Who speaks? Who represents the movement and when? Who leads and how do they inspire others to follow? Who is the face of the movement and what are the implications? These questions must be dealt with in order to maintain a healthy balance between humble determination and assertive patience. It is not an easy balance to strike. Make the movement as democratic and decentralized as possible. Do not fall victim to ego and self- publicity.

These are the four pitfalls that I hope you can avoid at all costs. But my sense is that you already know much of what I have said. Based on the words of the day’s most surprising guest speaker, I can see that you are all in good hands. “My name is Yolanda Renee King, granddaughter of Martin Luther King and Coretta Scott King. My grandfather had a dream that his four little children would not be judged by the color of their skin, but by the content of their character. I have a dream that enough is enough! And that this should be a gun-free world, period.”

Elected Libertarian: Cities should not own golf courses
Chele Farley Endorsed by NY Reform Party in run against Gillbrand for US Senate
Comment