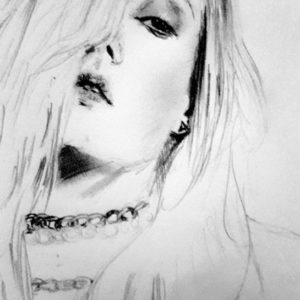 DOS stands for Dominus Obsequious Sororium [or Master over the slave women.]

Mack, who appeared in the television series, Smallville, in the role of Chloe Sullivan, is director of DOS.  Raniere is her master.  Both Raniere and Mack’s initials appear on brands of the slave women of DOS’s pubic area after the hot iron is applied. The brand occupies about two inches by two inches of pubic region below the line where women normally wear underwear.

In addition to branding ‘K-R-A-M’ on women, the all-female group are required to give Mack “collateral” consisting of nude photos and recordings of confessions – to ensure members remain loyal to Mack and Raniere.

Raniere is the only male member and is slave master of all women. Raniere – being in prison now on charges of sex-trafficking and forced labor – and denied bail as he awaits trial – leaves Mack running the slave group.

Mack is named in the criminal complaint as co-conspirator #1 but has not been arrested.

Sources have identified at least 57 women as slaves. As long as Mack is at large, she can prevent many of them from escaping but some have already escaped.

Mack tells her slaves that DOS offers them through slavery a “profound educational curriculum” that leads to “a greater understanding of the secret, honest world of femaleness.”

In addition to nude photographs, videos and recordings of confessions, the slaves assign bank accounts, deeds, wills, trusts, etc.  to Raniere. If the slave is disobedient, she loses her property. In the case of nude photos and confessions, these would be released to the public.

DOS slaves are required to make monthly offerings of collateral.

The probationary period ends with the revelation that Raniere is the leader – something often withheld by Mack and her top slaves when recruiting slaves and the lifelong slavery is sealed with a hot iron branding and a written Vow to follow Raniere for the duration of life.

DOS slaves are required to wear symbolic ‘chains’. These are in the form of a necklace, a waistlace or anklelace that the slave must never remove at any time.  Slaves must ask permission to go to sleep and keep their cell phone beside them to be prepared for readiness drills on a 24 hour basis. Slaves must respond to a text message from Mack within 60 seconds or face punishment which reportedly includes brisk paddling with a large wood paddle.

DOS members are placed on special diets -f 500-800 calories per day and required to jog a certain number of miles weekly to enhance their ability to obey Mack.

Raniere and Mack were headquartered in Albany NY. Following the investigation by the FBI, Raniere and Mack relocated with some slaves – including actress Nicki Clyne – to Mexico in November.  They enjoyed a Mexican holiday until federal police arrested Raniere on March 25 and deported him to US  authorities where he was haled before a federal magistrate, denied bail and is now in Brooklyn at the MDC prison facility.

Mack remains free and is holding the slave group together. Recently escaped slaves say that if Mack is arrested all the remaining slaves will leave and DOS will come to an end.

Others say that Raniere slave Clare Bronfman – a Seagram’s Liquor heiress – who finances Raniere’s alleged criminal operations – will step in and assume command of the slave women.