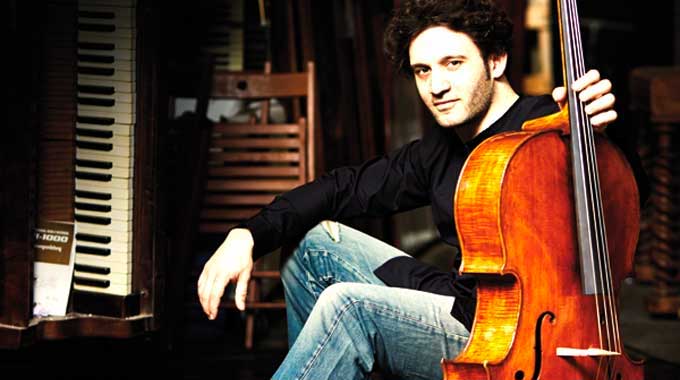 This weekend, Buffalo Philharmonic Orchestra music director JoAnn Falletta will again be on the podium, to conduct an almost all-Czech program of music, with one significant exception, on Friday March 4 at 10:30am and Saturday March 8 at 8pm. But, since the only non-Czech piece happens to be Sir Edward Elgar’s darkly elegiac Cello Concerto in E minor, Op. 85, featuring the critically acclaimed young German/French cellist Nicolas Altstaedt, who will be making his BPO debut, it’s not very likely that the even the most ardent fan of Czech music is likely to complain.

JoAnn Falletta and the BPO visit the heart of Europe

This weekend, Buffalo Philharmonic Orchestra music director JoAnn Falletta will again be on the podium, to conduct an almost all-Czech program of music, with one significant exception, on Friday March 4 at 10:30am and Saturday March 8 at 8pm. But, since the only non-Czech piece happens to be Sir Edward Elgar’s darkly elegiac Cello Concerto in E minor, Op. 85, featuring the critically acclaimed young German/French cellist Nicolas Altstaedt, who will be making his BPO debut, it’s not very likely that the even the most ardent fan of Czech music is likely to complain.

JoAnn Falletta is easily the most recorded music director in the BPO history. Besides a slew of self-produced, mainstream orchestral favorites on the BPO’s house Beau Fleuve label, Falletta has established a very fruitful relationship with the Naxos record label, the now dominant international classical record company, which has resulted in several award winning recordings, including a double Grammy Award winner. The BPO’s exploration of under-recorded repertoire from Eastern European countries has been especially welcome, with well-received individual CDs entirely devoted to the music of the Hungarian composers Béla Bartók and Ernst von Dohnányi, as well as that of the Czech composer Josef Suk. Building on that tradition, Falletta recently started to investigate the music of another Czech composer, Vít?zslav Novák (1870-1949), whose music is little known outside his homeland, in preparation for the release of new Naxos CD, devoted to the composer.

“I’ve done a lot of research into the compositions of Novák, a late-Romantic composer who wrote some truly beautiful music,” says Falletta, “and as I learned his music I started to live in it. Novak is able to create a truly evocative atmosphere in his compositions, and you often feel a sense of space, a geographic expanse, as well as a sense of time. There is something of a long view of things in his works, like that of Bruckner, which can be a little daunting, but also equally rewarding for the listener. Novak’s symphonic poem In the Tatra Mountains, Op.26 particularly intrigued us, and we’ll be performing it on a later concert, in June.”

The two works by Novak on this weekend’s program will be the first performances of any of his works by the BPO. To celebrate the opening of the new Prague Municipal Theatre in 1907, Novak was commissioned to write an overture for a new play by the Czech poet Jaroslav Vrchlicky. Amazingly, he composed his powerfulOverture to Lady Godiva, Op. 41 for Vrchlicky’s darkly romantic version of the well known legendary tale in the short space of two days. Novak also turned to Vrchlicky’s version of stories by the Danish author Hans Christian Andersen as inspiration for his tone poem Eternal Longing, Op.33. About this highly atmospheric work, the musicologist John Tyrell writes: “It is ravishing music, achieved by comparatively simple means. But like much of Novak’s music of the time, its simplicity and confidence is deceptive.”

The other Czech work on the program is Bedrich Smetana’s The Moldau, the most popular of the six tone poems that make up his orchestral cycle Má vlast. Surprisingly, while this work was first performed under the baton of the orchestra’s first music director Lajos Shuk in 1935, as part of the second ever BPO concert, it has subsequently been performed only one other time by the orchestra, in 1991 under then music director Max Valdes.

English composer Edward Elgar wrote the first theme for his Cello Concerto, his last significant composition, in March of 1918, immediately after returning home from a hospital operation, and he began working on the work seriously in July of that year, the last year of World War I, completing it in August 1919. The first performance took place later that year with the London Symphony in Queens Hall, in October. The composer himself conducted the premiere of the work on a program that included performances of works by Borodin and Scriabin, under another conductor, who usurped much of Elgar’s rehearsal time. The resulting under-rehearsed premiere was a near disaster, and the concerto only received its second performance in 1921. Elgar’s cello concerto never enjoyed the popularity of his other orchestral works until Jacqueline du Pré made a recording that became a classical best-seller in the 1960’s, but since that time it has become one of the most performed and recorded of all cello concertos. “Elgar was very much moved by the disasters of the first World War,” says Falletta, “and his reflections on that calamity, and the now lost kind of life that existed before the war, are evident in the music. Life for him did not make sense anymore.”

Since his debut performance with the Tonhalle Orchestra of Zurich under Neville Marriner in 2007 cellist Nicolas Altstaedt has performed all over the world with the symphony orchestras of Berlin, Stuttgart, Bamberg, Helsinki, Melbourne, New Zealand, the Simon Bolivar Orchestra, Kremerata Baltica, and the Tapiola Sinfonietta. He became the artistic director of the Lockenhaus Chamber Music Festival in 2012, and next season he will tour with the Vienna Symphony, while also performing all the Beethoven Sonatas at the Beethoven festivals in Bonn, Warsaw, and Gstaad and all the Bach suites in Seoul, Korea and Grenoble, France. Altstaedt plays a Giulio Cesare Gigli cello, circa 1770, from Rome, and a 2012 cello by Robert König.