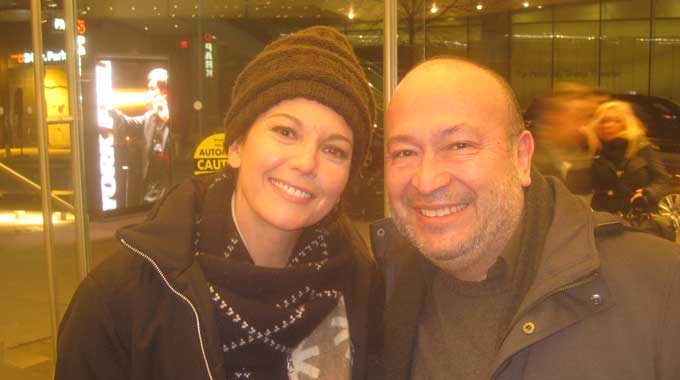 The fabulous Diane Lane (pictured above) recently announced that she will fund a grant for arts educators to honor director/composer/writer Elizabeth Swados who died on January 5th. Buffalo born Swados wrote the music for Lane’s acting debut in a production of Medea at New York’s La MaMa back in 1972 when she was six years old.

The fabulous Diane Lane (pictured above) recently announced that she will fund a grant for arts educators to honor director/composer/writer Elizabeth Swados who died on January 5th. Buffalo born Swados wrote the music for Lane’s acting debut in a production of Medea at New York’s La MaMa back in 1972 when she was six years old. Then in 1978 Lane made her Broadway debut in Swados’s groundbreaking musical Runaways, which will be revived this summer at City Center. Best known for her work in film (she was Oscar nominated for Unfaithful in 2002), Lane made her screen debut in 1979 in A Little Romance opposite Sir Laurence Olivier. She is reprising her role as Martha Kent in the upcoming filmBatman vs Superman: Dawn of Justice. Lane returned to her theater roots starring in a production of Sweet Bird of Youth at the Goodman Theatre in Chicago in 2013. Last year she starred in the Lincoln Theatre’s original production of The Mystery of Love & Sex co-starring with Tony Shalhoub.

Playwright Larry Gray (The Louisiana Trilogy) returns to the Alleyway to open the 2016-17 season with his play Dear Lydia, winner of the 2015 Maxim Mazumdar New Play Competition. Directed by Neal Radice, this world premiere will star David Mitchell and Melissa Leventhal. The company’s season will also include the 26th annual Buffalo Quickies (January 19th-February 11th) and I’m Fine (March 23rd-April 15th), a new play by Radice starring Ray Boucher, Emily Yancey, Bethany Sparacio, and James Chicockiwho will also be joining the cast of A Christmas Carol in December.

TOY will conclude its current season with the musical The True Story of the 3 Little Pigs, based on the popular best-selling picture book by Jon Scieszka and Lane Smith. Directed by Michael Walline with music direction by Keith Ersing, the production will star Jake Albarella, Kerrykate Abel, and Jennel Pruneda. The show opens on May 7th.

Terrence McNally, four-time Tony Award winning playwright, will appear at a benefit for BUA called An Evening with Terrence McNally on Friday April 1st, at 7 p.m. at the Theodore Roosevelt Inaugural National Historic Site. McNally will read excerpts from his book Selected Works, A Memoir in Plays, interspersed with readings of scenes from some of his plays. The event will include a reception with the playwright and a book signing. For tickets go to www.trsite.org under the “EVENTS” tab. The event is co-sponsored by BUA, the TR site, the Dramatists Guild Fund, and Just Buffalo Literary Center. Coming in July, BUA will present McNally’s It’s Only a Play, starring Jimmy Janowski, Michael Seitz, Lisa Ludwig, Anthony Alcocer, Mary Kate O’Connell and Anthony Chase.

Brian Cavanagh will direct the thriller Wait Until Dark which replaces the previously announced Quartet at the Kavinoky (April 29th–May 22nd). The 1966 play was revived on Broadway in 1998 starring Marisa Tomei. The local production will star Kathleen Macari, Adriano Gatto, Stan Klimecko, Patrick Moltane, Renee Landrigan, and Adam Rath. And save the date! The tenth annual Kavinoky Kavalcadewill be held on April 23rd at the Saturn Club, beginning at 7 p.m.

After almost fifty years of reviewing, writing and performing in Buffalo, Doug Smith and his wife Polly (pictured below) will be leaving the area and moving to be closer to their daughter near Cortland. Smith has acted in numerous productions, most recently in Tuesdays with Morrie and The Sunshine Boys. On Saturday, March 12th the Smiths will be at Theodore’s, 1728 Grand Island Blvd., in Grand Island from 2 to 7 p.m. to say goodbye to their many friends. All the best wishes!

Dixie Returns to The Smith
On The Boards Theater Listings