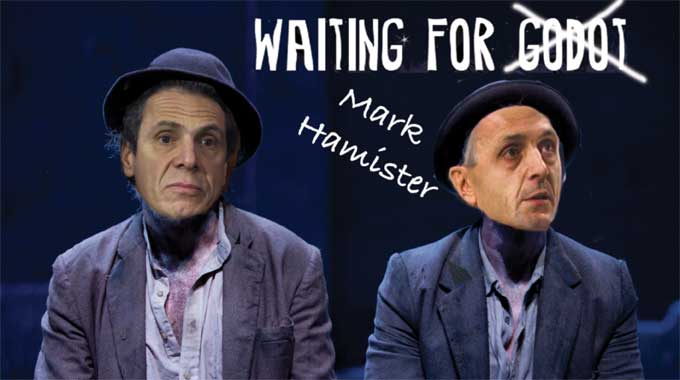 The sad truth behind the state development agencies that helped push through the proposed Hamister Hotel project in Niagara Falls four years ago is that silence is indeed golden, because despite all the talk about the city capitalizing on an opportunity too good to pass up, nothing has happened at 310 Rainbow Blvd. and requests for answers from the Cuomo bureaucrats are met with silence.  And the Hamister Group, headquartered in Buffalo, also has nothing to say.

The sad truth behind the state development agencies that helped push through the proposed Hamister Hotel project in Niagara Falls four years ago is that silence is indeed golden, because despite all the talk about the city capitalizing on an opportunity too good to pass up, nothing has happened at 310 Rainbow Blvd. and requests for answers from the Cuomo bureaucrats are met with silence.  And the Hamister Group, headquartered in Buffalo, also has nothing to say.

“It is a complete joke,” says developer Michael DiCienzo in describing the failure of the Hamister project at the prime downtown parcel that Mark Hamister’s company purchased for a song from the city with promises to build a transformational hotel touted by the mayor and the governor.  So far, Hamister has built nothing.

“It is very disappointing,” says Andrew Touma, president of the Niagara Falls City Council, about the lack of progress on the $35.7 million hotel that Hamister and the state said would be a magnet for attracting other developers to Niagara Falls.  Instead of a magnet project at the prime site, there are signs, one of which says “coming soon.”

Last October, three years after the council approved the sale of the land for a mere $100,000 to Hamister, Mayor Paul Dyster, an early and hard-driving salesman for the taxpayer-subsidized project, said “my expectation is I’m going to get a call very shortly saying that we’ve got all the details in place,” adding that if Hamister faltered “there is a process we would got through to solicit other developers.”

So here we are, nearly four years after Dyster and the state strong-armed the council into approving the deal for Hamister, with nothing to show but an empty lot.  And state officials, led by the Empire State Development Corporation, refuse to respond to questions for an accounting of what’s going on.  And Hamister, in step with his state backers, is also silent.

If there’s any hope left abut the sour experience, it is the possibility of reclaiming the land, as Dyster hinted, and starting over.   Council President Touma says “we can get the land back,” but it would likely be an arduous legal process and more precious time would be lost on a project that from the beginning, given the lack of details and any show of financial readiness, was slammed through the council as a “do-or-die” vote about the city’s development future.  Even last December, Dyster tried to keep the project alive for Christmas, talking about more promises from the Hamister Group that financing was just around the corner.  It turned out to be more hot air.

Mark Hamister is the same developer who was going to save the bankrupt Buffalo Sabres in 2002 but he backed out of buying the team when he couldn’t get the public money he wanted to make the purchase.  It was left to Rochester billionaire Tom Golisano to save the team for the city after Hamister’s bid fizzled.  And there’s currently a development project in Jamestown under the Hamister banner that is behind schedule, and the mayor said he was assured by Hamister that all is well and we’ll catch up after we deal with Buffalo and Niagara Falls.  Jamestown may have a long wait.

Michael DiCienzo, the wealthy hotelier who calls the Hamister project in Niagara Falls a joke, says he’s ready to step in and develop the Rainbow Blvd. site, saying Hamister has defaulted on his contract with all the delays and he has petitioned the city to award development rights to his company, Niagara Falls New York Hotel Management, LLC.

Touma sees DiCienzo has a proven developer in Niagara Falls, saying “he would be excellent, a perfect choice,” comments clearly signaling his frustration over all the empty promises from Hamister.  But even though Hamister is years behind schedule on a project that he has already scaled down, the Niagara County Industrial Development Agency has extended tax breaks for another six months, warning that not to do so would shut down the project.  Maybe that’s what needs to happen since Hamister has told the IDA it does not have the bank financing in place after all these years.

At the time of the heated debate over the Hamister project, there was some talk of possibly putting in a Nik Wellenda attraction at the downtown parcel, a complex that would offer aerial shows and other spectacles that would be a welcoming stop for tourists and families visiting the mighty falls, maybe more so than another hotel.  But that possibility never materialized as Dyster and the state said Hamister had the right plan to save the city.  If he did, we haven’t seen it yet and maybe Wallenda still could be enticed into returning to the city where he made his historic wire walk across the falls.

As things stand now, there is no hotel, no Wallenda, no inkling of what comes next since the key players aren’t talking, and it is anybody’s guess what will happen in the coming months, if anything.  The city was taken for a big ride by Hamister and his (state) supporters and possibly because of the high-profiled embarrassment of the failed project, state development agencies have gone into hiding.

A few weeks ago, the state fell behind several months on $82 million in payments to contractors working on the giant Solarcity project at Riverbend in South Buffalo, eventually finding the money from a state slush fund with very little in the way of explanation on how the signature project of Gov. Andrew Cuomo’s Buffalo Billion program had slipped off the radar.

Just like with the Hamister deal, getting information out of state agencies about how they handle the public’s money is a monumental task and often leads to spotty explanations with no opportunity to ask questions of the money keepers. .The failed Hamister project is a testament to the state’s secrecy and lack of transparency, and Empire State Development, the governor’s chief economic development agency, leads the way, whether it comes to SolarCity, the Hamister project, or the millions of taxpayer dollars being spent to defend a wrongful termination suit filed by a Buffalo contractor in the replica canal project.  Even Freedom of Information Law requests yield little information as the state plays a stalling game when it comes to telling the public how it spends their money.