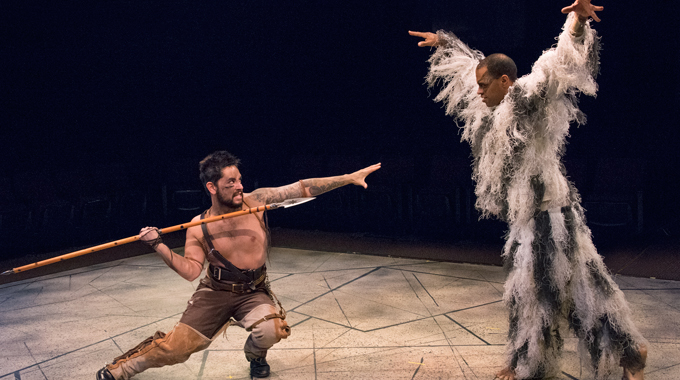 This weekend, the Irish Classical Theatre Company’s will open The Yeats Project: Two Plays by W.B. Yeats, a three-way collaboration with Lehrer Dance and Torn Space Theater. The production offers a relatively rare opportunity to take in two plays by William Butler Yeats: The Land of Heart’s Desire, the first of his plays to be performed publicly; and At the Hawk’s Well, one of his “Four Plays for Dancers.” Both plays reflect Yeats’ fascination with Irish mythology, and are remembered for their association with the Irish Literary Revival undertaken by Yeats, Lady Gregory, and others.

This weekend, the Irish Classical Theatre Company’s will open The Yeats Project: Two Plays by W.B. Yeats, a three-way collaboration with Lehrer Dance and Torn Space Theater. The production offers a relatively rare opportunity to take in two plays by William Butler Yeats: The Land of Heart’s Desire, the first of his plays to be performed publicly; and At the Hawk’s Well, one of his “Four Plays for Dancers.” Both plays reflect Yeats’ fascination with Irish mythology, and are remembered for their association with the Irish Literary Revival undertaken by Yeats, Lady Gregory, and others.

As a teenage student of Roger Shoemaker at Trinity College in Hartford, Connecticut, it never occurred to me that a strong foundation in the plays of Yeats was in any way unusual.  Professor Shoemaker adored ritual in theater and would send us careening happily between the early symbolist plays of the great Irish poet, and African American playwright Adrienne Kennedy’s avant-garde A Rat’s Mass.  For the record, I played Lazarus in “Calgary,” one of Yeats’ “Four Plays for Dancers.”

The current collaboration between Irish Classical Theatre, Torn Space, and Lehrer Dance is entirely consistent with the project Yeats set out for himself.  He famously opened Dublin’s Abbey Theatre with the declaration that “speech” was his only art, but throughout his theatrical career, sought to explore the relationships between speech, stagecraft, and movement. Along the way, he discovered Japanese Noh drama, and undermined the prevalence of realism that was the hallmark of the Western Modern Drama.

The Land of Heart’s Desire (1894) recounts the story of a young bride and groom who are visited by a fairy who tries to entice the bride away.

At the Hawk’s Well (1916), in which Yeats’ uses elements of Noh drama, follows an episode from the life of the mythological Irish hero Cuchulain. In this tale, Cuchulain meets an old man who has been waiting for fifty years beside a well that is guarded by a hawk-like woman.  The water of the well can grant immortality.  Nonetheless, the old man urges Cuchulain to leave, warning him that the he will waste his life in pursuit of the unattainable water.

Speaking by telephone with Jon Lehrer, I ask about his contribution to the project.  My first question is prosaic.  Press photos for The Yeats Project show a moment from At the Hawk’s Well featuring actors with exposed faces. Yeats wrote extensively about his theory of masks, and found his greatest inspiration outside of Irish folklore in highly symbolic ritual, mask, and movement of Japanese Noh. I remember wearing a mask as Lazarus, and the simultaneous challenge and liberation of performing while wearing one – as actors, with our faces subtracted from the equation, our energies were immediately channeled into our bodies and voices.  Will this project use masks?

There have been a number of challenges in bringing Yeats to the Andrews Theatre stage.

“I have been charged to create the movement,” explains Lehrer.

Yeats was famously detailed in his idea of movement for his plays, specifying, for instance, that to keep the emphasis on the text, actors should generally move slowly and quietly in a “rhythmical,” even “decorative” manner, as if they “were paintings on a frieze.” In certain instances, he requested the casting of performers who had been trained exclusively as dancers. As in Japanese Noh, he saw increasing the intensity of movement as a means to build the tension of a play’s climax. In his directions for At the Hawk’s Well, for instance, he describes, a “minute intensity of movement in the dance of the hawk.”

“I have used my own dancers from my own company for this production,” explains Lehrer.  “I am lucky enough to have a company of professional, fulltime dancers. This has been a tremendous advantage, because we have a shared vocabulary. We can bring to these plays the physicality for which we are known. Members of the audience who are familiar with our work will recognize that choreographic vocabulary.”

“We have enjoyed the challenge of working in the contained space of the [Andrews Theatre],” continues Lehrer.  “Most of our work has been done for a proscenium stage, and here we are working in the round. Dancers tend to be occupied with knowing where to find ‘the front.’ In this case, everywhere is the front, and everywhere is also the back.”

Lehrer describes an entirely equal collaboration with O’Neill and Shanahan.

“It has been a three-way collaboration in which no one element takes center stage,” he says.  “It was been very exciting to see what happens when actors and dancers enter the environment created by Dan.  It has been very gratifying to work with Vincent.

“We have actually used the actors to create the atmosphere and the landscape for these plays. In many instances they represent nature – vines, trees, a forest that comes to life.  A dancer plays the guardian of the well, and three dancers play the hawks who attack Cuchulain.”

While Lehrer has been able to draw from his company’s repertoire, and his name is closely associated with contemporary dance, he confides that some of his inspiration is more compatible with the period of Yeats’ plays  – Nijinsky’s choreography for Stravinsky’s Rite of Spring (1913). Michel Fokine who staged Stravinsky’s Firebird (1910) – which, like At the Hawk’s Well, features furies and nature personified.

“When I am creating,” reveals Lehrer, “for my inspiration, I often go back to the classics!”

The Yeats Project will be on stage at the Andrews Theatre, home of the Irish Classical Theatre Company, Friday, April 22 to Sunday, May 8, 2016.