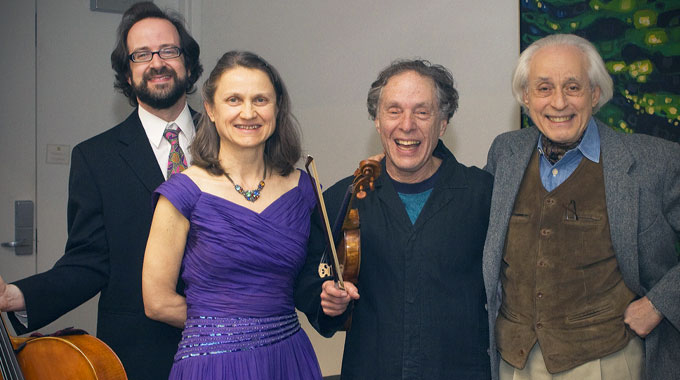 The final concert in this season’s “A Musical Feast” series will take place in the Tower Auditorium of the Burchfield Penny Art Center on the Elmwood side of the Buffalo State College Campus on Friday May 13 at 8pm.

Paris comes to Buffalo this Friday

The final concert in this season’s “A Musical Feast” series will take place in the Tower Auditorium of the Burchfield Penny Art Center on the Elmwood side of the Buffalo State College Campus on Friday May 13 at 8pm. The program is sure to delight all Francophile music lovers, since it features the music of Impressionist and post-Impressionist French composers, served-up with a fresh dollop of new music by the always interesting Moshe Shulman.

Violin virtuoso Charles Castleman, longtime faculty member at the Eastman School and currently professor at the Frost School of Music, University of Miami is always a welcome guest on the series. He returns to perform a pair of showpieces with Buffalo’s own favorite pianist, Claudia Hoca, who has been able to successfully return to top form after an almost fatal car accident a couple of years ago. The pair will be featured in the Poème, Op. 25, an exquisitely lyrical work by Ernest Chausson.

Chausson began his musical studies late, at the age of 24 in 1879 and his teachers at the Paris Conservatoire included Massenet and Franck. Beginning in 1886 his family wealth allowed the genial composer to create an influential salon in his elegant Paris mansion which attracted composers like Fauré, Debussy and Isaac Albéniz, as well as Impressionist painters such as Degas and Manet and writers like the symbolist poet Stéphane Mallarmé and the Russian novelist Ivan Turgenev.

An 1881 novella by Turgenev, “Le Chant de l’amour triomphant” provided Chausson with the inspiration for Poème his 1886 lushly Romantic work for violin and orchestra, which he later arranged for violin and piano. A good case can be made that Turgenev, who had a lifelong attachment to the celebrated mezzo-soprano Pauline Viardot, wrote his novella as a roman à clef about the failed engagement between Pauline Viardot’s daughter Marianne, and the composer Gabriel Fauré.

When the brilliant Belgian violin virtuoso Eugène Ysaÿe asked Chausson to compose a violin concerto for him, he had replied: “I hardly know where to begin with a concerto, which is a huge undertaking, the devil’s own task. But I can cope with a shorter work. It will be in very free form with several passages in which the violin plays alone.” The result was Poème, a freely rhapsodic work which successfully captures the mood of an unhappy love affair, even if its composer late changed the initial title of his work, named after that of Turgenev’s novella, first to Poème symphonique, and finally to simply Poème. Chausson dedicated the work to Ysaÿe, who gave the premiere in 1896, and who later acknowledged that he wrote the sinuous double-stop passages in the work’s exposition “over Chausson’s framework”. The overwhelming success of Poème, a first for Chausson, inspired him to write some of his finest other works, before his untimely death in 1899 in a bicycling accident at the age of 44.

Castleman and Hoca will also perform the rarely programmed Sonata for violin and piano No.2 in g major, composed in 1927-1929 by Maurice Ravel, one of the very first works by any European classical composer to make effective use of jazz, that uniquely American musical language which swept through post World War I Europe. While both Claude Debussy and Maurice Ravel composed their sole sonatas for violin and piano in the key of G major, their works use very different materials and techniques. Ravel had earlier composed his only string quartet in 1904, and in some ways it was influenced by, and is to a certain extent an homage to the string quartet, composed in 1890, by his good friend Debussy. On the other hand, Ravel’s Violin Sonata No 2 in G major, composed between 1923 and 1927, is utterly different from that of Debussy’s 1917 sonata for violin. About his own compositions, Ravel was fond of saying that “‘personne n’avait fait ça” (nobody has done that before), and in the case of his violin sonata no one would begin to disagree. The first “Allegretto” movement of the sonata starts off with a long melodic line in a seemingly Romantic manner, before being interrupted by a nervous, left hand snapping phrase. Predating the composer’s visit to America in 1928, the middle, “Blues” movement, marked “Moderato” elegantly captures Ravel’s enthusiasm for American jazz idioms, with the violin indulging in plaintive wailings against the implacable rhythm of the piano. Ravel revised the final “Allegro” movement, the first version of which he later found too lyrical, replacing it with a fiery “Perpetuum mobile” movement, creating in the process a work that sounds just as fresh today as it did at its premiere.

UB professor of cello Jonathan Golove will partner Claudia Hoca in a pair of works by the French sisters, Lili and Nadia Boulanger. Lili, who suffered from chronic illness from an early age, composed her Nocturne for piano and cello in 1911 at the age of 18, a few short years before her sadly premature death at the age of 24. Her older, long-lived sister Nadia, who composed her Trois pieces for cello and piano in 1914, was a French composer, conductor, and pedagogue who died in 1979. Nadia counted among her students many of the leading composers and musicians of the 20th century, including Aaron Copland, Elliott Carter and Astor Piazzolla. In the early 1960’s, Charles Haupt, founder and artistic director of “A Musical Feast” was awarded a two year Fulbright scholarship to study with Nadia Boulanger in Paris.

Golove will join the Israeli-born composer, and multi-instrument performer Moshe Shulman, a Buffalo resident who has been instrumental in establishing the local tango scene, in his new work Praxis. Shulman wrote Praxis, for two very different instruments, the cello and the bandoneón, a type of Argentine concertina that is essential in the performance of tango music. “Praxis is a search of grounds of commonality through musical material as a common thread” says Shulman, “written for bandoneón and cello, instruments that in so many ways are away from each other”. Shulman observes, however, that “the first use of the bandoneón was to play religious and German folk music. I see the bandoneón as a portable organ in this piece, which, along with cello, explores individuality versus commonality”.