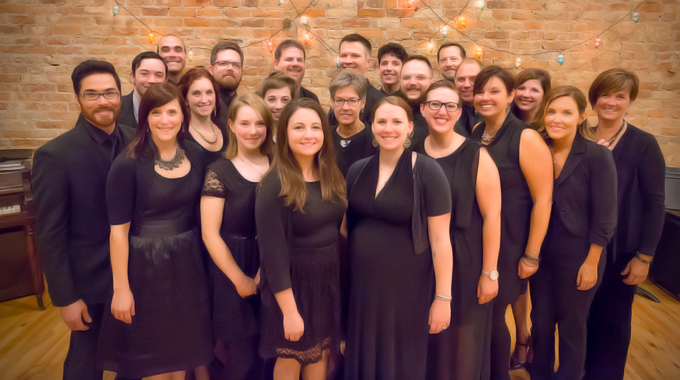 In keeping with the group’s mission of educational outreach, Harmonia will host Sametz for a brief residency, as he leads a choral workshop on Friday May 20, with singers from Niagara Falls and Sweet Home High Schools, which will culminate with a 7pm preview concert at Historic Holy Trinity, 1419 Falls Street in Niagara Falls.

On Saturday May 21 at 7pm the Harmonia Chamber Singers will offer a special concert in celebration of their 10th anniversary at St. Joseph’s Cathedral, 54 Franklin Street in Downtown Buffalo. A highlight of the concert will be the world premiere of “Echo”, a work commissioned by the Harmonia Chamber Singers (HCS) in celebration of their 10th anniversary season from American composer Steven Sametz, who will be in attendance. Robert Duerr, a North Tonawanda native who has conducted a dozen or so Metropolitan Opera performances, as well as several dozen performances by the now, alas, sadly defunct New York City Opera, is unequivocal in his praise of the Harmonia Chamber Singers, who he calls “the best vocal group in Western New York”.

Robert Pacillo, the founder and artistic director of the group explains its genesis: “The origin of Harmonia can be traced back to the Gaudete Chamber Choir, which was formed when Rev. Paul Seil, then pastor of St. Lawrence Church in Buffalo, and a friend, asked me if I knew some singers who would be interested in presenting a Christmas concert on Gaudete Sunday, December 11, 2005. I was singing with Vocalis Chamber Choir at the time, so I knew some capable vocalists. There was no intention of keeping the Gaudete group intact after the concert. However, the experience lit a flame, and I felt an artistic calling. I wanted to lead a group that performed a broad spectrum of unaccompanied choral music, from plainchant to jazz, to collegiate a cappella. I give credit to my wife, Catherine, for encouraging me, and my friends, who were a part of the original ensemble”.

From its inception, Harmonia has striven to combine the old and the new, as in the program for this concert, where Renaissance classics by Palestrina, Byrd and Monteverdi will be featured, along with works by Bruckner, Britten and contemporary European and American composers. The moving “Gabriel’s Oboe”, the main theme from Italian composer Ennio Morricone’s score for the classic 1986 film “The Mission”, will feature oboist Sandy Consiglio and BPO cellist David Schmude in an arrangement by Craig Hella Johnson.

“I am a firm believer that if the audience isn’t entertained or enrapt, your music will not communicate as well”, says Pacillo. “Our programming contains a mix of old and new because it helps the flow of a program, and keeps listeners interested. We have done both thematic and non-thematic programs, and they both have value. In our first few seasons, much of our programming was like a ‘Top 20’ of choral favorites. There was something for everyone: Chant, Renaissance, Romantic, Jazz and Pop. In recent years, we have explored more of the thematic realm, while maintaining an eclectic element. We did the entire Palestrina “Missa Papae Marcelli” in one program. While that Mass stands by itself, I brought in modern music that fit in between the Mass movements. We have done similar things with the Victoria “Requiem” and Howells’ “Requiem”, major works which we interspersed with related, appropriate selections”.

Looking back at highlights of HCS’s first decade, Pacillo remembers the group’s first trip outside of Buffalo, for a performance at the Church of Our Saviour on Park Avenue in New York City. Subsequently, in March of 2015, the group made its Carnegie Hall debut, in Weill Recital Hall. Closer to home, HCS made its Canadian debut in December 2015, at St. Mark’s Anglican Church, Niagara-on-the-Lake. Pacillo is also proud of the HCS’s collaborations with the groups such as the Ars Nova Musicians Chamber Orchestra, Buffalo Niagara Youth Chorus, Buffalo Master Chorale, the Camerata di Sant’Antonio, the Resonance Vocal Ensemble, and numerous high school choirs, including those from Lockport, Wilson, Niagara Falls, and North Tonawanda, as well as with poet Robert Giannetti, and iron worker Andrew Chambers, of Arc Iron Creations”. But, for Pacillo, the group’s greatest achievement has been “Just making it for ten years, in a turbulent time for the arts!”

So, why did the HCS decide to commission their anniversary piece from Steven Sametz? Pacillo explains: “I didn’t know Steven personally before this year, but HCS has performed much of his music throughout the years. Sametz has also done a lot of work with one of my favorite ensembles, Chanticleer. I was always drawn to the reflective and sublime nature of many of his pieces, and I believed he would be the perfect composer to help us celebrate our 10 years. This season, I decided to feature Sametz’ music in all four of our concerts”.

In keeping with the group’s mission of educational outreach, Harmonia will host Sametz for a brief residency, as he leads a choral workshop on Friday May 20, with singers from Niagara Falls and Sweet Home High Schools, which will culminate with a 7pm preview concert at Historic Holy Trinity, 1419 Falls Street in Niagara Falls. “Educational outreach is essential in directing the future paths of our young musicians”, says Pacillo. “We love to work closely with young singers on sound vocal technique and choral principles, such as tone, balance, blend, intonation, diction, and breathing. Students also learn about a wide variety of choral repertoire and performance styles and gain valuable performance experience sharing the stage with a professional vocal ensemble, and these opportunities may serve as inspiration to pursue a music career. We believe that by bringing our workshops and concerts to underserved populations in Buffalo and Niagara Falls, we can expose new people to the joys of choral music”.

Finally, Pacillo says, “We would love to see a filled St. Joseph Cathedral on May 21 – Where else can you get a world-class performance for $10?”

News of the Weird
On the Boards, Presented by Irish Classical Theatre