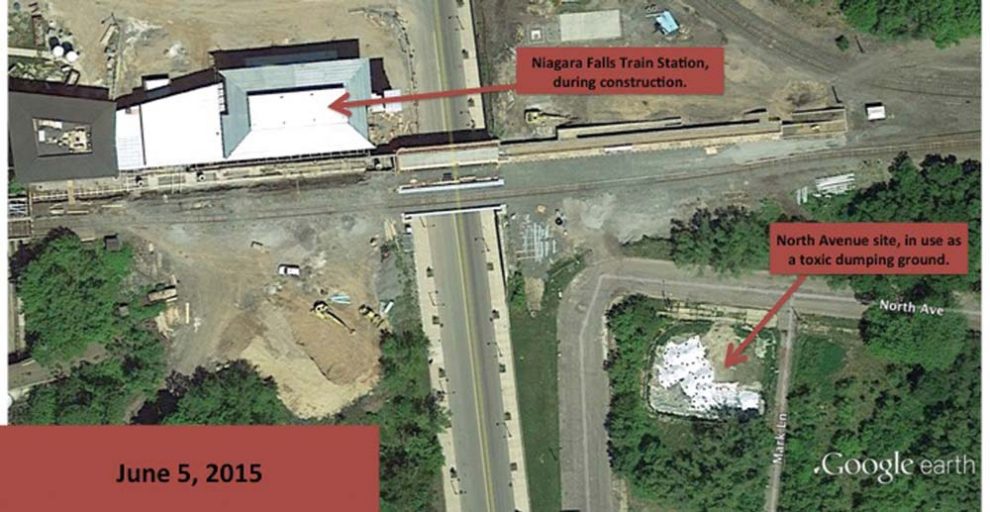 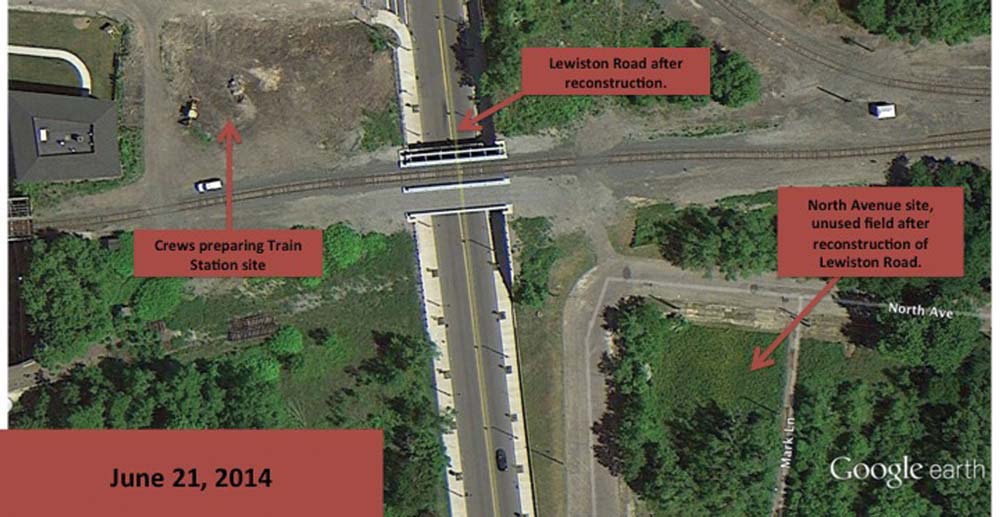 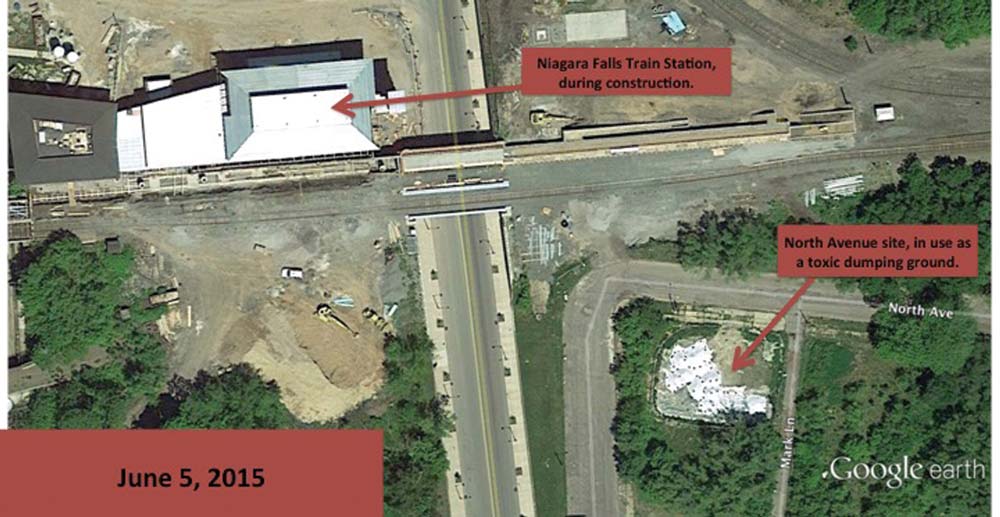 Last week, Artvoice broke a story about a suspected toxic dumpsite at 915 North Avenue in the City of Niagara Falls. The site has signs posted around it warning that it is radioactive; the 100-ton pile within the site appeared abandoned and with broken fencing making it open to public access.

Aerial images accessible through Google Earth indicates the 100 tons of material was placed at the site during the construction of the new $44 million Niagara Falls Train Station spearheaded by Mayor Paul Dyster and located about 75 yards away.

Earlier this week DeSantis told the public that the pile has only been located on the site for “a couple of months.” A Google Earth image taken on June 5, 2015 – about 13 months ago – clearly shows the presence of the pile.

The pile of waste, with radioactive warning signs around it, is covered with sheet-plastic, easily visible in satellite images. Up until the publication of our story last week, that covering was blown off in places and ripped in others, secured only by sandbags sitting atop the plastic sheet, potentially allowing the materials underneath – apparently dirt and rock – possibly mixed with radioactive materials – to be carried away by rain and blown by winds into open windows of the densely populated neighborhood.
Desantis has told the public and local media the city plans to remove the spoils pile shortly.

No mention of potential radioactive contamination at the train station site has ever before been publicly disclosed prior to Artvoice’s publication last week. 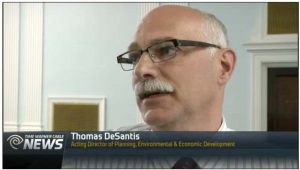 In a phone call with Mayor Paul Dyster on Wednesday, Dyster explained the materials were temporarily located at 915 North Avenue with the expectation that more hazardous materials would be found at the train station site. It made more sense, he said, to aggregate materials at 915 North Ave. before they are shipped to an out of state site for safe disposal, saving on remediation costs.

Dyster also told Artvoice he was confident the spoils pile presented no serious public safety threat and that he personally has held the materials in his hand.

Despite officials maintaining the spoils pile presents no danger, no in-state landfill will accept this classification of radioactive waste and it will be removed to an out of state facility.

Remediation of the lot may also be necessary after the present spoils pile is removed, largely because of ground water runoff.
Why did City officials choose to dump radioactive material here?

When disposing of radioactive materials it is standard practice to relocate contaminants to an already contaminated site – rather than to additionally contaminate an uncontaminated area: this is the difference between a brownfield and greenfield.
This raises the question of why the city would relocate this material to 915 North Avenue unless the site was already known to be contaminated – something that had never been previously disclosed.

According to the Niagara Falls City Assessor’s website, there was a chain of purchases and sales connected with this lot, which measures 96 feet by 85 feet over the last few decades.

The City of Niagara Falls acquired 915 North Ave., in 2002, for what is listed as $1.67 million from Tarsem Bawja, a Toronto Real Estate agent with the Sutton Group of Toronto.

When contacted by Artvoice, Bawja admitted he bought the property but did not sell it to the city.
“The city took it back (through tax foreclosure),” Bajwa said.

Dyster told Artvoice that the $1.67 million purchase price listed on the city website is not the true price the city paid for the small parcel. He said the lot was acquired by the City along with some 246 other properties in a tax foreclosure auction and that the total price for all the properties the city acquired totaled $1.67 million.

What is also worthy of note, and may be coincidental, is that prior to 1987, 915 North Ave. was owned, according to the city website, by a one Karen DeSantis.

At least one contractor at the train station – Resetarits Construction – reported they were confronted with radiological problems during construction. It is possible that this North Ave radioactive pile came from atomic waste buried sometime since the 1940’s and unearthed during recent construction. This was the case at nearby Lewiston Road where tons of so-called slag was determined to be nuclear waste from Niagara Falls’ nuclear development industry dating back to the Manhattan Project.

What materials could be in the toxic spoils pile?

The radioactive pile may contain uranium, radium, and/or thorium — if records of similar sites around Niagara Falls and Niagara County are an indicator. The possibility exists that the exposed site may also contain plutonium, called by some scientists as “one of the most toxic substances known to mankind.”

All of these radiological materials were handled, enhanced, manipulated or otherwise produced in Niagara Falls in the chemistry labs and metallurgical furnaces powered by Niagara’s abundant electricity. Many of these elements were subsequently buried locally, including direct-to-soils burials.

Without laboratory analysis, public oversight and split laboratory sampling, it may be impossible to know whether there is a danger to human health on North Ave. since not every metallic smelting operation produced the same kind of waste materials or waste-stream.

Radioactive Waste no Cause for Concern: According to Falls’ Senior Planner, DeSantis
The 50th Anniversary of the Freedom of Information Act?