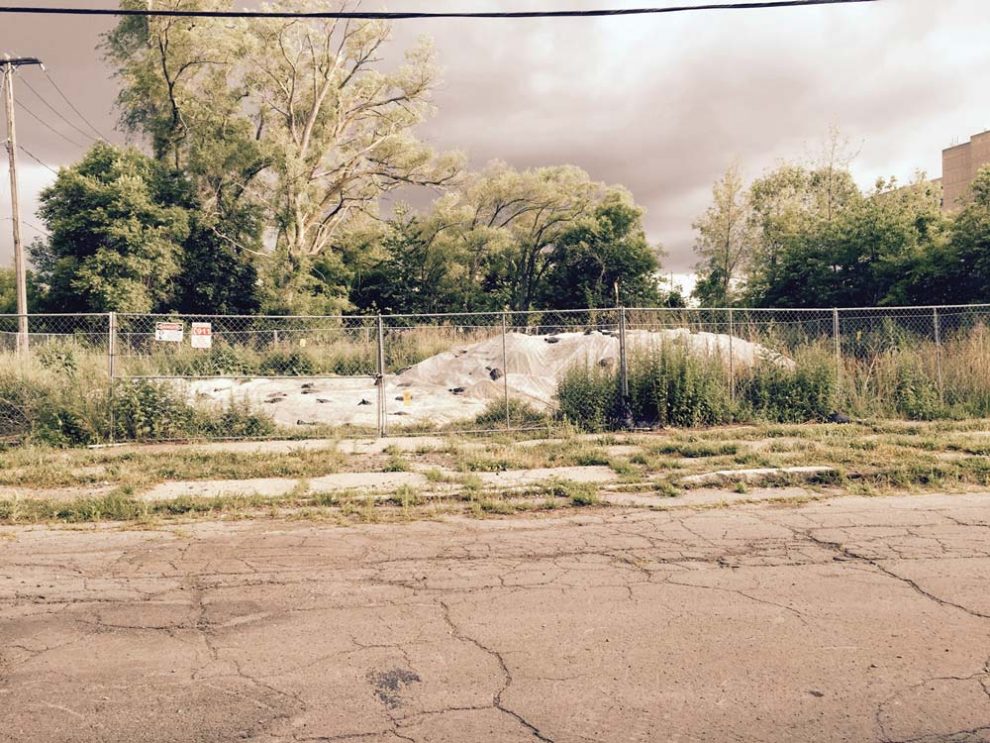 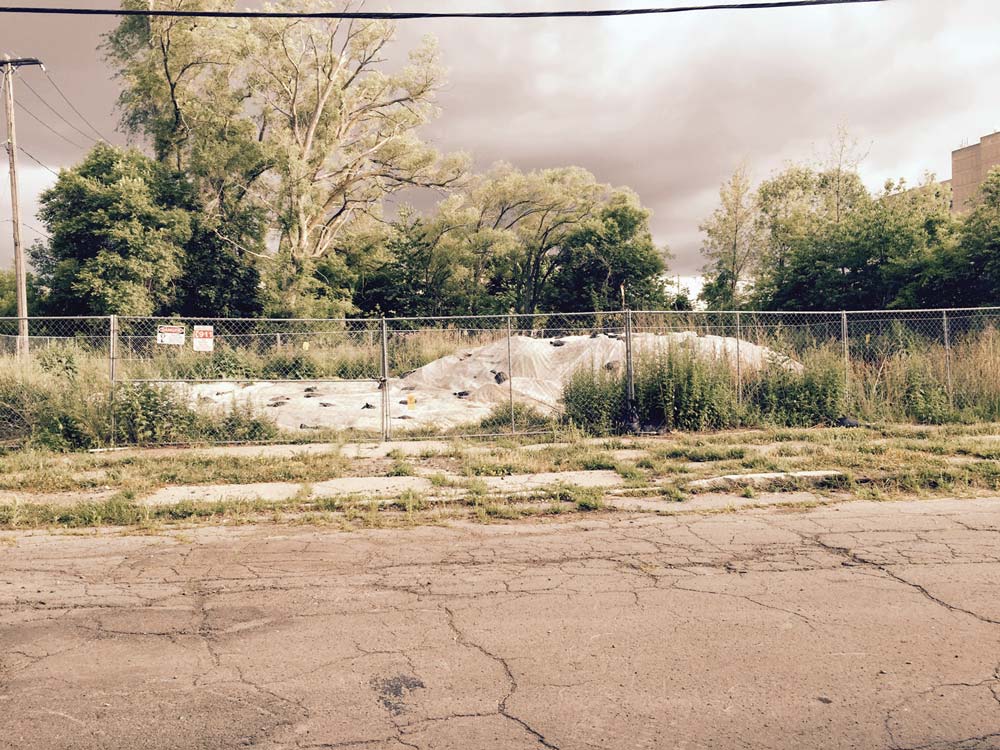 Niagara Falls city officials attempted to address concerns this week in the wake of an expose in Artvoice on the creation of a radioactive waste dump on North Avenue here. Approximately 100 tons of radioactive soils was excavated during the construction of the city’s new train station and dumped at the North Ave site which sits about 75 yards from the new train station.
How dangerous were the materials stored at the dump?

A tall, padlocked chain link fence was built around it, festooned with warning signs.

“DANGER HARD HATS, SAFETY GLASSES, SAFETY SHOES REQUIRED IN THIS AREA AT ALL TIMES,” one states.

Another advises, “IN CASE OF EMERGENCY CALL 911 FIRE RESCUE POLICE.”

A third sign warns of the presence of “RADIOACTIVE MATERIAL” and reads: “Caution Radioactive Materials Area.”

Last week, Artvoice visited the site and found that the gate of the fence had fallen down, and that large holes and tears appeared in the plastic safety sheeting used to cover the radioactive waste. In some sections, the plastic sheeting had blown off and the area was soaked with groundwater.

The fence was repaired after the story was published, and Thomas J. DeSantis, the city’s acting director of planning, environmental and economic development, responded to media and public inquiries downplaying the safety issue.

“It’s not contaminating anything, the levels are so low that they don’t cause a health threat,” said DeSantis. “It’s safe to anybody walking by.”

DeSantis told the Buffalo News and the Niagara Gazette that the 100 tons of radioactive waste has been at that location for “about two months.”

While the accuracy of his comments about the safety of the site is not known, his statement as to the length of time the radioactive pile has been there is inaccurate.

Artvoice is in possession of a series of dated aerial images that show the lot was green and had no evidence of waste dumping as of June 2014. However by June 5, 2015, the present radioactive pile is clearly visible in the aerial picture.

That means the radioactive pile was placed there at least thirteen months ago and not, as assserted by DeSantis, two months ago.
Despite the broken down fence and the tattered condition of the plastic safety sheeting, DeSantis took umbrage at the word “abandoned” in Artvoice’s story.

“It was never abandoned and it was never a threat,” he said. “There is a licensed contractor on-site to determine when they contact any contaminated materials, those materials are then segregated out and then later shipped off-site.”

The contactor DeSantis was referring to is Great Lakes Environmental, a subcontractor on the train station project. 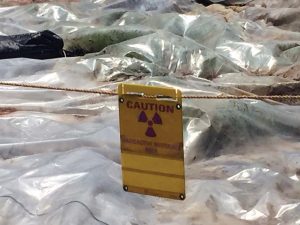 While it uncertain what DeSantis’ credentials are to discuss the relative hazard or safety of the radioactive materials that were excavated, Great Lakes environmental technicians were the ones who thought it prudent to erect the fence, post the radioactive warning signs and cover the material with protective plastic sheeting.

“We dig it up and then we segregate it,” said DeSantis. He said the dirt doesn’t go to Modern Landfill, but rather a permitted landfill out of state.

A couple of questions arise.

Why would the city’s own environmental contractor, Great Lakes Environmental, go to such lengths to segregate the material and post warning signs if, as DeSantis maintains, it’s not dangerous?

And if the 100 tons of radioactive material stored on North Avenue for the past year is safe, why does it have to be shipped out of state for disposal?

In print and television interviews this week, DeSantis did not produce any documents to back up what he was saying. Great Lakes Environmental must have filed paperwork such as a truck manifest, DEC response documentation and applicable documentation required by the EPA in order to remove radioactive material from a construction site. Where is it?

DeSantis told the Gazette that the radioactive warning signs that had been posted by the city’s environmental contractor were “unnecessary,” and that he’d ordered them to be taken down.

Radioactive warning signs are required to be posted at radioactive piles by federal law.

The lack of a city engineer to oversee a project the magnitude of the $44 million train station construction is almost inconceivable. Niagara Falls Mayor Paul Dyster fired former city engineer Jeffrey Skurka in 2013 after Skurka spoke publicly about safety hazards at the Lewiston Road reconstruction project, where radioactive waste was a major problem.

Skurka has since sued the city.

Without access to the environmental reports, it is difficult to say what sort of radioactive waste the city dumped on North Avenue. Sites in Niagara Falls have been tested and shown to contain uranium, radium and thorium. Records show that plutonium – which was found in Lewiston – one of the most toxic substances known to man – was also handled in Niagara Falls.

DeSantis said he is certain that there is no health threat, even if trace amounts of dangerous radioactive minerals from nuclear waste is present.

“The relevant fact isn’t what the exact isotope name is, what is relevant is that it has a low level of radiation, that’s clear,” he said.

Contrary to what DeSantis says about safety, the Beir -VII report by the National Academy of Sciences in 2005 states that there “is no safe dose of radiation no matter how small.”

Whether a large or small dose of radiation is being emitted from the site, what’s clear is that we have nothing but DeSantis’s word on the public safety issue.

However a year or more of rain, snow, wind and official neglect have possibly scattered whatever toxic substances that were there to the four winds, potentially infiltrating the air and perhaps the drinking water as well.

City Council Chairman Andrew Touma told concerned members of the public at Monday’s Council meeting that he had also asked questions of city officials about the radioactive material.

“The spoils pile is not abandoned or open to public access,” said Touma, who noted the broken fence had been repaired. “The general excavation is complete and this last pile is scheduled for removal to an out-of-state facility within the next two weeks.”
In an interview with Time Warner Cable, DeSantis accused Artvoice of “fear mongering.” He said the removal of the radioactive material was not prompted by the Artvoice story, but was previously scheduled in accordance with guidelines for the construction process.

Would the fence have been fixed, would arrangements have been made to remove the 100 tons of radioactive waste had Artvoice not shined a light on it last week?

More importantly, did Mayor Paul Dyster and DeSantis – who dismissed questions of need and cost and common sense in their rush to build their new train station – likewise dismiss concern for the health and safety of the people of Niagara Falls?