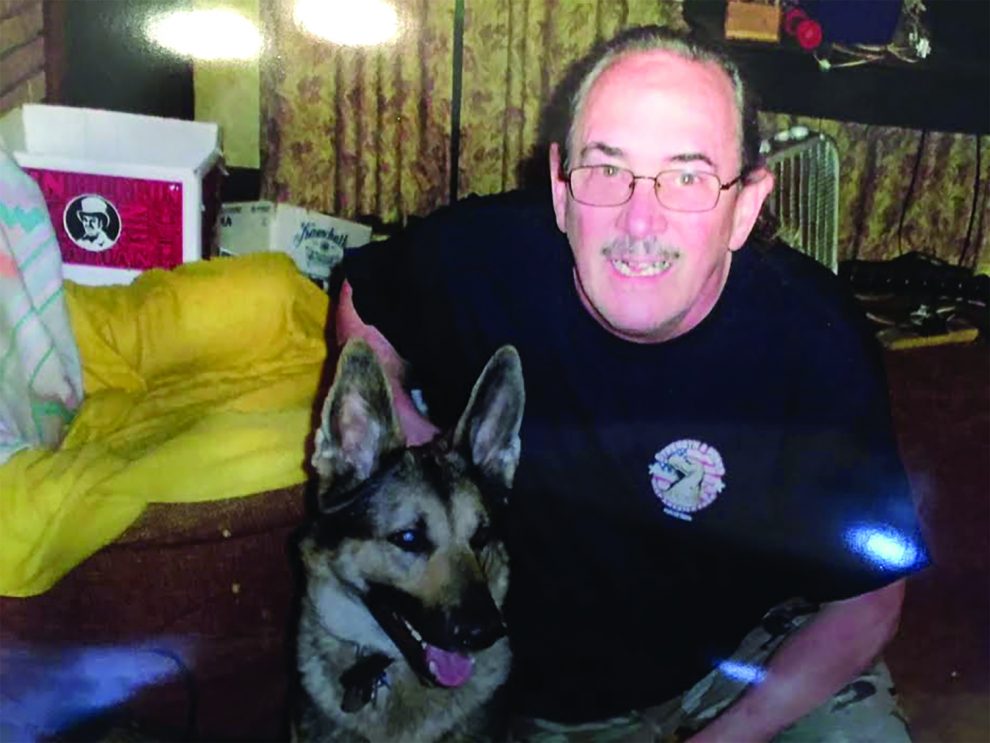 On February 15, 2017, a notice of claim was served on Buffalo and Tonawanda police for the shooting death of a German Shepherd belonging to 37-year military veteran and Riverside homeowner, Sergeant First Class (retired) Gary Aljoe.

The dog, named ‘Sarge’, was shot and killed by Lieutenant Derek Scott of the Tonawanda Police Department just before Christmas last year during a ‘wrong house’ raid that netted no drugs.

Artvoice obtained documents relating to the raid which led to the dog’s death.

The warrant suggests information was provided to police from a confidential informant who may have been seeking to avoid prosecution on charges.

The warrant and other documents add significant doubt, if not suspicion, as to why the informant was judged to be believable and why two different police department’s officers [Tonawanda and Buffalo] found it necessary to gather to raid Sgt. Aljoe’s quiet Riverside household just before dawn three days before Christmas.

The search warrant reveals that the informant went with Buffalo Police before Buffalo City Court Judge Thomas Amodeo and claimed he bought marijuana and heroin on two occasions from a man at Aljoe’s Ullman Street residence in December last year.

Strangely, the informant was unable to name the individual- not even a first name, or to describe the age, ethnicity, height, weight, color of hair, color of eyes, race or any distinguishing features of the man he claimed he purchased drugs from. He only knew the address and the color of the outside of the house.

The house was raided, but officers had no idea who they were looking for.  Police broke down doors, busted up the house, terrorized occupants, shot the dog, but found no marijuana or heroin.

Police storming up to the room of Sgt. Aljoe’s son, Garrett, 34, they allege a baggie was found and in it a trace amount of cocaine, residue with a possible street value of 10 cents.

Aljoe’s attorney, Matthew Albert, has seen this before and suspects remnants of drugs are planted in cases of fruitless raids to justify wrong house invasions.

Alberts says hundreds of innocent people’s homes are raided every year by Buffalo Police. The vast majority do not yield any contraband or only residue, or a seed or particle of marijuana.

Conflicting stories of where Sarge was when police suddenly entered the veteran’s home appear in the documents, according to Albert.

Lieutenant Scott, who shot the dog, claimed Sarge was on the couch in the living room when he lunged toward an officer.

Tonawanda Police Officer Frank Bartolotta, who Sarge was allegedly attacking, said the dog was laying right in the doorway about to attack. The couch is 10 feet from the doorway, according to Albert.

“Twenty armed officers stormed the residence of this proud Veteran, his son, and their beautiful German Shepherd as if they were storming the Beaches of Normandy,” Alberty said. “ … Gary Aljoe is 60 plus years old; his son, Garrett Aljoe, weighs about 120 pounds. You could pick twenty random women from a sewing club and they would be able to control the scene without needing to resort to deadly force. Police killed this dog for a Christmas bounty. It was a cowardly act.”

The dog was shot twice. Police involved in the case said that after the dog was struck by the first bullet, he was flailing around in pain, subdued, not attacking.

He was incapacitated but might live with treatment, Albert said, “This begs the question why a second shot was needed?”

But, with the animal squirming in pain, and, as old Sarge must have sensed the very last seconds of his life had just arrived, crying as dogs sometimes do – police shot the dog again killing him.

No sooner had they dispatched the dog, officers called animal control, who put Sarge in a body bag and removed him.

The next step in Aljoe’s legal process is for Albert to have minor possession charges dismissed against Garrett Aljoe (in whose room the baggie with residue was allegedly found).

Albert will argue that the warrant lacking any identification about the target means legally it lacks probable cause.

No police officer has ever been charged with animal cruelty for any of the hundreds of shooting deaths of dogs on fruitless wrong house drug raids no matter how compelling the evidence to support the fact that the kills were unnecessary.

However, men like Garrett Aljoe are always charged for every last shred of residue or plant stem that police could possibly find in the residences of homes they raid.

Garrett Aljoe returns to Court before Judge Fiorella where Albert is attempting to have charges against him dismissed. Upon the Aljoes’ being examined by the City Attorney’s Office pursuant to the now filed Notices of Claim, Albert will file a federal lawsuit against the relevant parties.