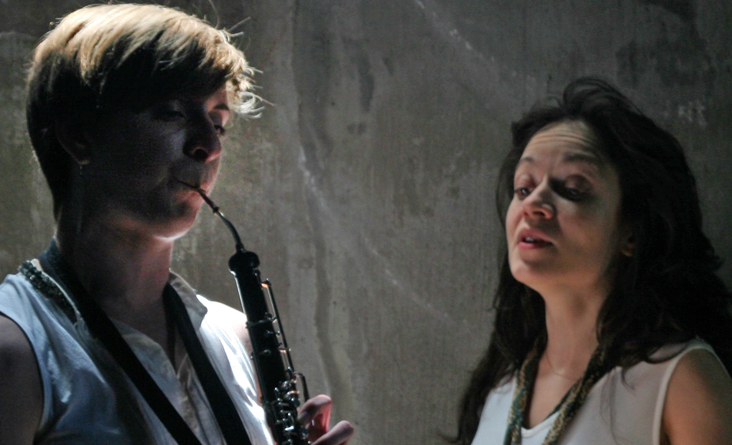 A truly unique pleasure of last summer’s local classical music scene was the debut of Senso di Voce at Silo City. Vocalist Esin Gündüz and oboist and English horn player Megan Kyle magically took the members of the sold-out audience to another world, making effective use of the huge reverberation in the massive concrete silo of the Marine “A” Elevator, once used for grain storage, but now successfully repurposed as a venue for both the fine arts and musical performance.

Senso di Voce returns to Silo City on Friday August 11 at 7pm when they will perform this time in the Perot Elevator, making use of the very different acoustic properties of this much larger space.

Last year’s concert focused on Medieval, Renaissance, and Baroque music from the Western canon intertwined with contemporary improvisations. The two concerts this year explore the connections between these early Western musical traditions and those of nearby Mediterranean and Balkan cultures, as Megan Kyle explains: “As a contemporary composer and vocal performer, Esin is interested in the relationships among traditional singing styles that are rich in overtones, those that make use of multiphonics, and those that evoke instrumental timbres. Pieces from Turkey, Bulgaria, Sardinia, and Greece trace these connections and allow me to explore the traditional roots of the oboe. As always, the sensibility of Silo City—the feeling of nearly infinite space, the silos like universes in themselves as they stretch to the sky—shapes the pieces chosen for the program. They share a common thread of spiritual rapture and meditation, whether secular or religious. This is music that reaches up.”

“As an ensemble, Senso di Voce has since its founding been interested in reinterpreting early music”, says Megan, “both in terms of re-imagining pieces of disparate instrumentations for voice-oboe duo, and in terms of exploring their sonorities and musical ideas through improvisations. In the process of researching Medieval music, Esin and I found sonic similarities with Mediterranean and Balkan music of the same era—in the styles of ornamentation, even at times the vocal timbres. They began tugging on that thread, finding more pieces that weave together a cross-section of early music across Europe to the Black Sea. They take inspiration from the Belgian vocal ensemble Graindelavoix, which focuses on the genealogy of vocal repertoire and explores the historical and geographical connections between various early music traditions. Graindelavoix writes of their work: ‘The past is not a solid reality that we are separated from, instead it is a continuous set of underlays and counter-currents that undulate and live in our bodies: in ever changing times and geographical locations, new eruptions and collisions of time-tectonics occur’.”

Audience space is almost unlimited in the Perot Elevator, and the members of the audience will be encouraged to move throughout the performance to various seating or standing areas around the space.

Tickets available online at sensodivoce.brownpapertickets.com and at the door $10 general / $5 students.