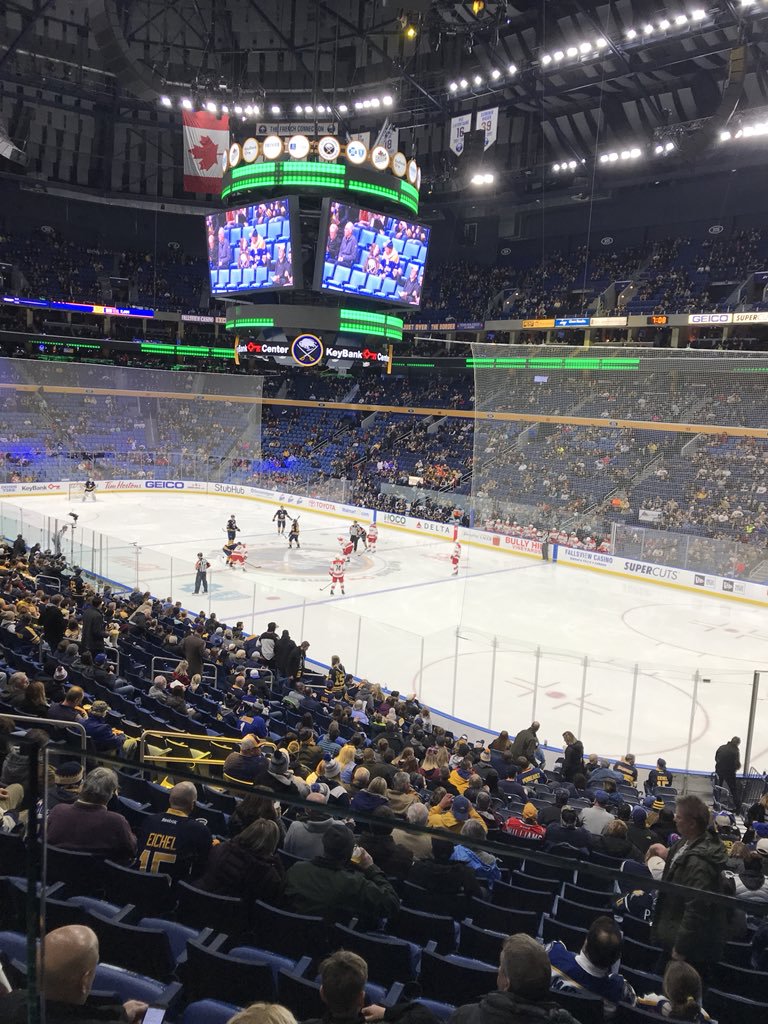 Young fan base tuning out as team’s fortunes swoon

Go back to Christmas vacation in  the mid and late 70s, starting in 1973. That was the time for the much heralded Buffalo Sabres annual open practice.

The team would pass out free tickets to any and all comers, offering free admission to Memorial Auditorium and a chance to watch the players go through the paces of a typical practice, which would then include a skills competition and even a mini scrimmage.

Fans scooped up the tickets. Parents would come with their youngsters. Not only was it a chance for fans to see their heroes in action, but an opportunity to sit downstairs in the golds and reds, seats that were far out of reach for the average ticket buyer in those days. Most of those seats were already committed to season ticket holders and unavailable for single game purchase on game days.

So come practice day they opened up the doors three hours early, and with open seating, the stampede would be on to secure those precious lower seats. By start time the Aud was full, 16,000 plus high pitched squeals oohing and ahhing to the moves of Gilbert Perreault and the French Connection, listening to emcee Ted Darling on the ice introducing the players as they speed skated through cones and obstructions, soaking in every bit of the experience.

The fans loved the event. The team cemented its love affair with the community, in part to those open practices. Moving forward, those youngsters committed dozens of hours of their time camping out on Terrace Street on many a cold morning, just to get the chance to buy a couple of nosebleed orange tickets or standing room. As young adults they committed to season ticket ownership, and when the Sabres moved to their new arena in 1996, those same fans who had fallen in love with their heroes as little kids made the big commitment to pricey club seats, parking passes, and other fan perks.

The team had middling success during those early years. The Sabres’ first coach and general manager Punch Imlach boldly predicted that this team would be the first of the expansion era to win a Stanley Cup. There was no talk of “drilling more wells” or framing his promise as “the sole reason for existence”. It was a sense of confidence and hubris which penetrated throughout the entire organization.

They came close. Oh so close. In year three of the organization’s history they reached the playoffs for the first time, and older fans still get chills seeing old grainy video of fans at the Aud raining down the chant of “Thank You Sabres” as their team gave the powerhouse and eventual Stanley Cup champs that year Montreal Canadiens everything they could handle. Two years later it was all the way to the Cup finals, and many will state that had it not been for a hobbled goaltender (Roger Crozier), the Sabres would have had that first championship.

This was an organization whose hallmark was pride and purpose, whose standing was cemented in the community via soaring ticket sales and sponsorship, and whose players were idolized and beloved throughout the area, those old veterans continue to be revered to this day.

Juxtapose all that to what is going on now.

This past weekend, the Sabres hosted two matinee games at KeyBank Center, first on Saturday against the Los Angeles Kings, and then Monday entertaining the Washington Capitals.

Buffalo was totally outmanned, outhustled and embarrassed by the visiting Kings, losing 4-2 to a team that last won here in Buffalo back in 2003. Two days later, the team played better, but the entire performance was listless and boring as the team fell to the Caps 3-1.  The final moment leading to Washington’s empty net goal featured a baffling and horrible sequence by star defenseman Rasmus Ristolainen, who spent upwards of 12 seconds unable to get the puck out of his own legs and make a simple pass up ice.

The Sabres are now 0-6-1 in day games this season. Mind you, those are the games that former General Manager Tim Murray asked for, predicting that matinees would give his team a competitive edge.

More appallingly, these are the games where the young fans of tomorrow are in attendance. The young people who are supposed to fall in love with their home town team and form the core of the ticket buying base for this franchise come 2030 and beyond. The arena was chock full of youngsters for both games, taking advantage of team discounted tickets geared towards families, and of course with sites such as StubHub where tickets are cheap and plentiful. There was even a pretty nifty giveaway at the gate, a rarity for Sabres games.

On Saturday it was boos cascading down to the ice as the hapless Sabres left the ice down 4-0 after two. On Monday one could spot as many jerseys of Vladimir Putin apologist and Caps star Alexander Ovechkin in the stands and those of Jack Eichel.

“I don’t think our guys were ready to play,” said an exasperated coach Phil Housley following Saturday’s debacle. “We’ll have to get better tomorrow, learn from it”. Housley rejected any notion that players are just going through the motions, waiting for trade deadline day and to get shipped out. Forward Jason Pomiville was asked the same question and replied, “I hope not.” A pretty undefinite answer.

So forget the notion of building blocks for future team fan bases. The Sabres have a problem now, as social media platforms are chock full of long time season ticket fans saying they’ve seen enough and this will be the last season. After trumpeting out bold numbers of 16,000 season ticket caps and numbers of applicants on the “blue and gold” waiting list, the team has yet to disclose actual season ticket numbers for this season.

For many games, tickets on StubHub have been available by the hundreds at prices starting at $6. The team will have better luck with sales and a stronger secondary market come March, with the white hot Vegas Golden Knights coming to town, along with the ever popular Chicago Blackhawks and Patrick Kane (Both matinee games, yikes). Later this month the Toronto Maple Leafs make two appearances in Buffalo.

As for ticket value, a new absurd price point of this commodity has reached ridiculous proportions. Not only have fans not been able to give tickets away, but this past Monday, local microbrew operator Community Beer Works tweeted out this offer…. “We have tickets for today’s Sabres game. We’ve tried giving them to our vendors, customers, and friends. No one wants them. So, we turn to you, Twitter. We’ll actually pay you $10 to take our two seats in the 200 level and a pass for the parking ramp.”

The tickets, pass, and we assume the $10, were snapped up by a lucky fan. For Community Beer Works, a bit of a financial hit. But unlike some business models in town, they can’t just go out and drill another oil well.