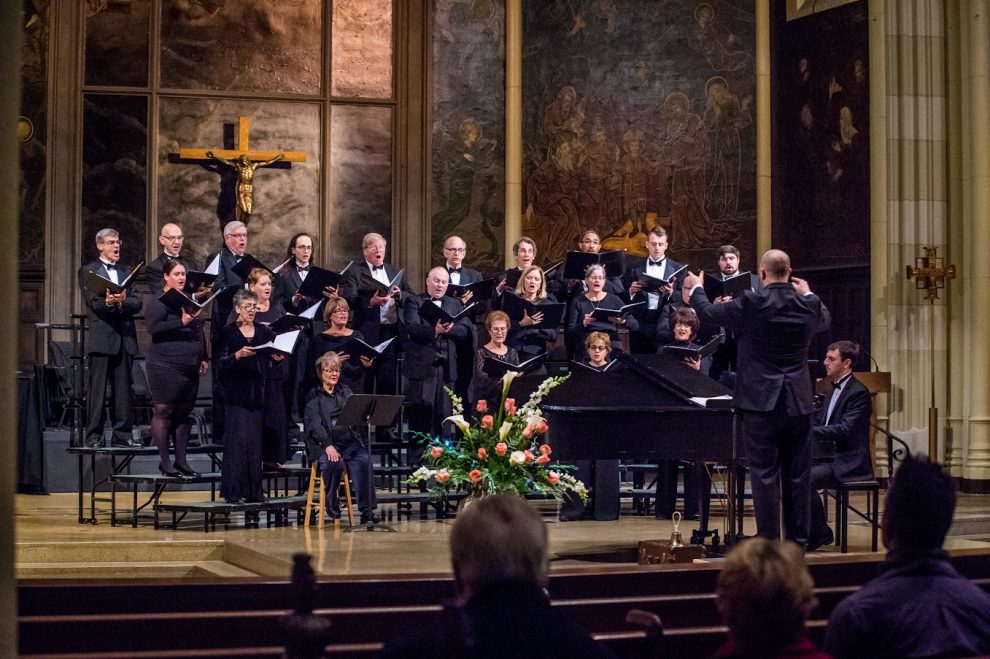 The Buffalo Master Chorale looks at love at Slee Hall

“Doreen Rao was the founding director of the BMC”, says Bassin, “and I had the opportunity to get to know the group first through collaborations with the Clarence Summer Orchestra, where I sit in the trumpet section. Then a few years later, my Unitarian Universalist Church of Buffalo Choir collaborated with the BMC on Fr. Jack Ledwon’s final Opera Sacra production, Honegger’s Jeanne d’Arc au bûcher. Following in the footsteps of Maestra Rao can be intimidating, however, with the experience in choral conducting I’ve gained across the past five years at UUCB, I’m truly relishing the opportunity to further contribute to our region’s vibrant choir scene”.

“The concert will open with Kyle Gann’s 2002 choral masterpiece, Transcendental Sonnets, in his later arrangement with piano-duo accompaniment, a piece I’m privileged to lead for the second time in our area”, says Bassin. “Kyle is a compelling and multifaceted American original, and the way his passion for the subject and exquisite collection and setting of these five poems by Jones Very come together has an impact in performance which is truly special! In my first year at UUCB, I gave a performance of the orchestral version of the piece, which was only its second performance in the original version. Since then, I’ve been thinking back on the premiere performance of his two-piano version, which I was lucky enough to attend. Gann brings to life something of the religious fervor in Jones Very’s poetry while retaining a contemporary, post-modern edge. In the orchestral version, there’s a hint of romanticism at almost every turn, but in this version – with only the choir and soloists providing the ‘sustain’ against the backdrop of the percussion orchestra of two pianos- I feel an even greater immediacy of the poet’s fragile voice”.

“Brahms’s lush and varied collections of love songs in the Liebeslieder Waltzer – also set for voices and two pianos – make a wonderful counterbalance to the depths and profundity of the Gann”, says Bassin, “making for what I hope is a satisfying and unique concert experience. The program is called ‘Romantic Ecstasies’, highlighting the contrast and confluence of the subjects of both pieces. A hundred years earlier than Gann, and on the other side of the world, we see Brahms almost out-romantic himself in both collections of these Liebeslieder Waltzer – Love-songs Waltzes – a project he began after editing Schubert’s collection of German Dances. I’ve always been suspicious of how quickly Brahms made versions of these pieces for just piano four-hands, eliminating the choral line entirely, or how he and others later orchestrated the melodies. They’re all delightful and getting each to dance ‘just-so’ is a wonderfully-rewarding musical challenge, however none of this would be possible without their charming, evocative, and highly-romantic texts. With all of that in mind, we’re performing most of both collections – Opp. 52 and 65 – and we’ll do most of them as a full choir. There will be two duos, a few solos, and one number each for pairings of the choir Soprano/Alto and Tenor/Bass sections”.

“This Friday’s program in Slee Hall comes a little more than halfway through an exciting season”, says Bassin, “that began with orchestral collaborations with the Clarence Summer Orchestra in July and the Amherst Symphony in October, followed in November by my debut program with the group – a 1,000 year journey through the repertoire, which we performed at St. Joseph University Parish and Christ the King Seminary – and a holiday concert collaboration with the Buffalo Niagara Youth Chamber Choir. Knowing that the first half of our season would have several performances in richly-reverberant churches, I chose UB for our third major program as deliberately as I chose the two works on the program”.

Tickets are $15 general admission, and $5 for students, and they can be purchased online: www.bnchoirs.org, or at the door.