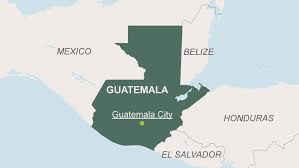 Based on a Judicial Watch report:

The head of the US and UN-backed International Commission against Impunity in Guatemala (CICIG). was in Washington D.C. today to promote his agenda in Central America.  A Colombian attorney and former judge, Ivan Velásquez runs The CICIG.  Its stated purpose is to protect “the right to life and to personal integrity” of citizens from vigilante groups that “commit illegal acts” — those linked to “agents of the State or [with] the capacity to generate impunity for their illegal actions.”

A newswire story states the U.S. has given CICIG $44.5 million since it was established a decade ago.

The Tillerson State Department has not wavered in its support for both Velásquez and CICIG.

“Mr. Velásquez has been an effective leader of CICIG in its fight against corruption in Guatemala,” the State Department release said. “CICIG has played and should continue to play an important role in strengthening Guatemalan institutions and tackling the corruption that undermines security and prosperity in Guatemala.”

As a lawyer in Colombia, Velásquez aligned with the Fuerzas Armadas Revolucionarias de Colombia (FARC), the Marxist guerrilla formed by communist farmers in the country’s central region.

Former Colombian President Alvaro Uribe says that, when Velasquez was a judge in Colombia, he launched a crusade to absolve the country’s narcoterrorism. Velásquez ues the justice system to prosecute political enemies, according to Uribe, who now serves in Colombia’s senate.

During a visit last week to Guatemala, U.S. Ambassador to the UN Nikki Haley reiterated the Tillerson’s support for CICIG and its commissioner. Haley told Guatemalan President Morales that it was in his interest to back CICIG, according to

During today’s appearance at the Wilson Center in Washington D.C., Velásquez was to be praised as a key figure in Guatemala’s fight against corruption and impunity. The purpose of his U.S. visit is to discuss the process of choosing Guatemala’s next attorney general and other related anti-corruption efforts involving the rule of law.

Guatemala shares a 595-mile border and many porous crossing points into Mexico, creating a path north. According to Judicial Watch, Guatemala is a gateway into the United States for narcotics and illegal aliens worldwide.