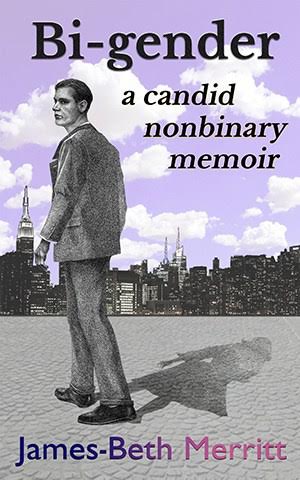 By Johnny B. Gay

While interest in nonbinary genders is getting attention, there are few books that share firsthand accounts of people who feel they are neither strictly male nor strictly female. Bi-gender, a nonbinary identity, includes people who believe they shift back and forth between male and female.

Merritt wrote Bi-Gender as the events it recounts were happening, starting in October of 2016, when he first came across the term “bi-gender.” Before then, Merritt says, “I’d never thought it was possible to be two genders. I figured I was just a profoundly flawed human being.”

In 2014, Facebook added more than 50 gender options, including “non-binary,” “agender,” and “bigender,” while nonbinary characters like Alex Fierro in the Magnus Chase series and Tyler Mason on Showtime’s Billions have made appearances in novels, film, and television.

Countries like the United Kingdom, Australia, and Nepal have given legal status to a third gender.

Canada and the U.S. have not. Vermont and the state of Washington are considering a nonbinary X as an alternative to M or F on driver’s licenses, following the example of Ontario, Oregon, California, and the District of Columbia, all of which added the option in 2017.

Being nonbinary may be advancing toward recognition and acceptance, just as being gay, lesbian, and transgender did not too many years ago.

Bi-Gender (Gender Rebel Press, 2018, $9.95 in paperback) will be released March 15th on Amazon.com and elsewhere. Information on the book, as well as articles and resources, are available on Merritt’s website at www.bi-gender.com.