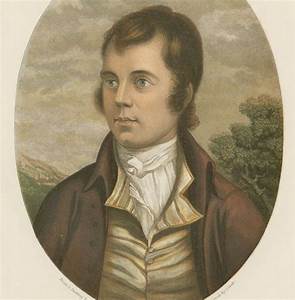 By Dr. John O. Hunter
Burns and Yeats
Selecting my favorite poets is difficult to do, and on another day, it may be others but always be in contention would be Robert Burns and William Butler Yeats.They draw me because of their life stories as well as the  distinction of their works.
Burns
The memory of Robert Burns has been fondly proclaimed at suppers on his birthday for the past 250 years. He is the only poet honored in this way; even Shakespeare does not get this annual attention.
What explains Robert Burns? By the time he was 16, he had read his way through much of classical literature– Shakespeare, Alexander Pope, John Locke and Scottish poets who had preceded him, and he learned Latin, all with not much more than a year of formal schooling.
In his short turbulent life, he produced poems now universally admired, published a book of poetry in the Scots dialect, thus preserving an ancient tongue, revised and wrote over 300 Scots songs, including what has become the world’s anthem, Auld Lang Syne, wrote over 700 letters in superb standard English, including some of the most beautiful love letters ever written.
His lyrical legacy is all the more remarkable because many of his writings were inspired when he  was working the land, living a life of hardship which he described most aptly as,” the cheerless gloom of a hermit with the unceasing toil of a galley slave.”
The first key to understanding his growth and development is that he had been taught to read! Indeed, it was demanded of him by the church established during the Scottish Reformation led by the religious radical, John Knox, a preacher of truly terrifying power, who insisted that all boys and girls must be taught to read Holy Scripture. As a result, Scotland’s literacy rate at the end of the 18th century would be the highest in all of Europe– astonishing! because in Burns’ time, Scotland was one of the poorest of countries, with a population of about 2 million people. Yet the value placed on reading and writing for religious reasons turned it into a remarkably literate culture.
What old  John Knox did not foresee is that once an individual is taught to read, his mind is free, and he begins to make his own decisions about what to read and write and think. The expression, “free to think for oursel’s,” has origins in Scotland.
And Burns pushed it to the limit, sometimes beyond, which could land him in trouble with the Kirk or the Court. Burns was always a beacon of controversy. As the saying goes, “he was far ahead of his time.” Among his immortal poems, A Man’s a Man, is one of the most powerful statements ever written on the fundamental dignity and integrity of all men everywhere.
Nor did Burns neglect the majesty of women. Long before our shallow era of political correctness, at a time when Thomas Paine’s revolutionary pamphlet, “The Rights of Man”, was flooding Europe, Burns wrote his poem, “The Rights of Women.”
Burns had a rare insight into the hearts and minds of his fellow Scots that he learned to apply to all people everywhere, regardless of class distinctions or stations in society.
Robert Burns died too soon, at the age of 37. He told his wife, Jean, at the end,”Don’t be afraid: I’ll be more respected in 100 years after I am dead than  I am now.” He was not and does not need to be made into a poet superhero, but through his poems and songs, he brought wisdom and grace that made him a legend in his time and likely will continue on for generations to come.

William Butler Yeats was born in Dublin, Ireland into a sophisticated but not wealthy Anglo- Irish family well known in art and religious circles. His father was a complete skeptic, rejecting religious belief entirely, fiercely intellectual, and a prominent artist. Yeats, the poet, was influenced both positively and negatively by his father. Out of his own need for belief in revelation and a higher power, he rejected his father’s intellectual skepticism, but he did not turn back to the church.
I think of him as the Mozart of poetry. His metaphorical imagery is clear, crystalline, sometimes hard, sometimes soft, often brilliant. There are two convoluted terms that we need to understand Yeats– “dialectical thinking and antinomies.” The dialectic is the notion that for every force(thesis) there is a counterforce(anti-thesis). Antinomies are contradictions between principles that seem equally necessary and reasonable.(To a hardened rationalist, it may be unseemly that truth should act in this way, but she does.)
These combine as the best description of Yeats’ approach in all his roles, as a poet, dramatist, theater founder and director, Irish Senator and political leader, Nobel Laureate, and lecturer of world renown. His thought was profoundly dialectical. For every truth, he looked for a counter truth, a truth that contradicted the first truth.
Yeats’stance was always heroic, Promethean, even facing certain defeat. His tenacity sprang from a strong belief in the value of Celtic tradition and his commitment to heroic art. He worked through his philosophy and belief to creative, mystical vision. He tried to create his own religion, resorting to various occult forms, including his wife’s automatic writing.
In the end, Yeats failed in his quest for a spiritual framework. He failed in my view for the reasons that Alexander Solzhenitsyn articulated many years later in his Nobel address: an artist who attempts to create an independent spiritual world simply “breaks down, because no man, even a genius, is capable of bearing such a burden– the whole irrationality of art, it’s blinding convolutions, it’s unpredictable discoveries, it’s shattering impact on people, are too magical to be exhausted by the philosophy of any one artist.” (Solzhenitsyn)
Yet where Yeats  may have failed philosophically in his system, he created a body of poems of the greatest power and beauty. They are nothing less than miraculous in their aesthetic revelation. In my opinion, “The wild Swans at Coole” is the most beautiful lyrical poem ever written.
Yeats was romantically and politically involved with Maud Gonne for most of his life. She was 6 feet tall and beautiful, some said the greatest beauty in Ireland, of regal bearing, politically very intense. She was a passionate and fearless speaker and campaigner. Yeats thought that she could be Ireland’s Joan of arc. In the Victorian age, long before women’s liberation, she was indeed a liberated woman.
Politically, Yeats was a “right-winger.” He was too much of the poet rejecting violence to be a revolutionary fighter, still he could not escape becoming involved in the politics of Ireland and England.He was on top of the issues, but also conflicted by the violence. He saw that the blood of the Easter 1916 rebellion radically changed everything:
“All’s changed, changed utterly,
a terrible beauty is born.”
In 1919, when Ireland was in Civil War and World War I was raging in Europe, Yeats’ vision turned apocalyptic. The result was a poem of great power, The Second Coming, with lines  marmolean and unforgettable that seem to fit every generation.
… The blood -dimmed tide is loosed, and everywhere
the ceremony of innocence is drowned.
The best lack all conviction, while the worst
are full of passionate intensity…
He died in 1939 at age 73, having written his own epitaph:
Cast a cold eye
on life, on death.
Horseman, pass by.