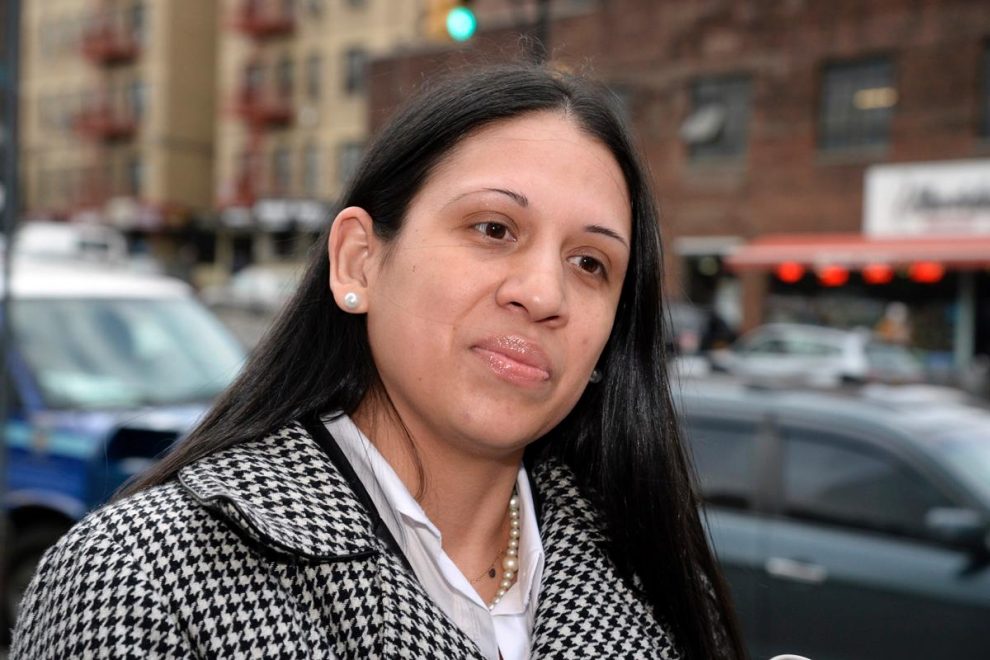 The Bronx District Attorney’s Office is being sued for $15 million by suspended crime analyst, Crystal Rivera, an 11 year employee of the office.

She is suing for medical expenses, loss of earning capacity, pain and suffering, mental anguish and punitive damages.At the heart of the dispute is Rivera’s personal relationship with NYPD Detective David Terrell of the 42nd Precinct.

Rivera, a mother of four, claims that Bronx DA Darcel Clark opened a baseless probe of her boyfriend, Detective David Terrell, to “vilify” him to cover up her office’s “incompetence and unethical practices.”

Rivera was put on administrative leave with pay on Aug. 30, 2017 because DA administrators told her not to contact her boyfriend, Terrell, then found texts and calls between the two in her phone records.

The papers filed by Rivera say Clark and her aides retaliated against Rivera by charging her administratively with insubordination because she continued to speak with her boyfriend.

Her boyfriend, Terrell – who has been called a “monster” and “one of the most brutal men in the history of the [NYPD] department”- has been the target of several lawsuits alleging false arrest and police brutality. He is a key figure in the failed prosecution of a 2015 shooting that led DA Clark to launch an investigation in Terrell and eventually led to the feds to investigate him.

Rivera is pushing back. She claims the DA’s office went after Terrell to cover up its incompetent and corrupt legal practices.

“They were trying to hang their blown prosecution on [Terrell] and wanted to use Crystal to get to him,” Rivera’s attorney Eric Sanders said in an interview with the Law Journal.

Rivera claims to be able to back up her allegations.

In her complaint –  as part of a notice of claim – against the Bronx DA’s office, Rivera claims Bronx prosecutors:

Meanwhile, with the time saved by illegal cheating, instead of properly investigating and prosecuting crimes against accused criminal defendants, prosecutors at the Bronx DA spend their time shopping, consuming alcohol, and engaging in sexual activities in the DA’s office.

Among some of Rivera’s allegations are:

In addition to allegations of unethical legal practices, Rivera claims prosecutors at the Bronx District Attorney’s office are a lusty and besotted group:

Among the claims Rivera makes:

“(The ADAs) would drink and we’d page them, ‘The court is calling,’ ” Rivera she said. “They would answer their pagers, go to court — physically and mentally intoxicated — do their job and come back.”

Rivera said Clark is responsible for allowing the misconduct.

As for Terrell, Rivera’s boyfriend who she says is being wrongfully targeted by her employers, has been profiled as one of the ‘worst’ cops in New York City.

Shaun King, an anti-corruption New York journalist, quoted Bronx families who he spoke to for an August 2017 article in which they called Terrell ‘the terror’ and ‘a monster’.

‘In the Bronx, NYPD Detective David Terrell is called “the terror.” I’ve heard him called a “monster,” a “terrorist,” “evil,” and have had multiple families tell me he’s “the worst human being” they’ve encountered in their entire lives….  I’ve written nearly a thousand stories on police brutality and David Terrell is one of the top three worst people I’ve ever profiled.  The other two cops are in prison. Terrell should join them,’ King wrote.