On March 30th, 2018, INDECLINE, an activist art collective, installed an unauthorized art exhibit into a rented hotel suite at the Trump International Hotel and Tower in New York City.

Using subterfuge, they spent the previous day clearing and repurposing the room to resemble a prison, whose sole occupant, handcuffed inside of a small cell and surrounded by live rats, McDonalds wrappers, and a photo of Vladimir Putin, was an effigy of Donald Trump.

In preparation for the art protest – entitled – “The People’s Prison”, over a dozen US artists were selected by INDECLINE to paint portraits of American activists and revolutionaries on American flags.

These flags were hung on the walls of the hotel suite, facing prisoner Trump. 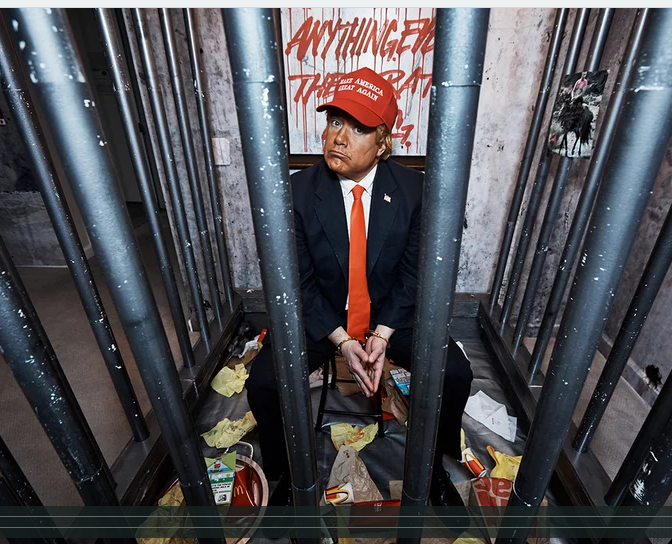 Surrounding the cell are a jury of what a selection of artists considered to be some of America’s greatest peers, painted directly onto the flags.

In April (date tbd), the protest art installation is planned to be replicated in its entirety at Gallery 30 South in Pasadena, CA.

Each painting will be offered for sale with proceeds benefiting an array of organizations from the Native American Rights Fund, to the Southern Poverty Law Center.

Below is a list of the participating artists, the figures they painted and the pricing and charity information related to an April 11th art show in Los Angeles, Ca.

The Emperor Has No Balls: