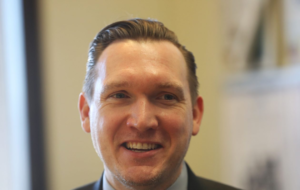 Today, Governor Cuomo told a gathered crowd that Kathy Hochul would give Democrats the best chance to take away the 27th Congressional District from Chris Collins. He referenced Nancy Pelosi, implying that she expressed a similar sentiment.

Democratic Congressional Candidate Nate McMurray is disappointed by the statement. “Clearly I’m not part of the Washington/Albany insider game. But you know what? I want no part of that mess. This is a new era. It’s an era where the people again decide what’s best, not a group of political elites.”

McMurray continued, “The Governor is not out there with me in the 27th District. He does not see the energy and enthusiasm we see, not from big donors but from regular people.”

“I wish the Governor would join me on a trip to Batavia or Warsaw or Lockport and see the support we’re feeling in those rooms,” McMurray said.

“Sooner or later Albany and DC will realize, ‘Don’t underestimate Nate.’ I’m no pawn on a board. No one owns me. No one owns the people of NY 27.”

With high regards and gratitude,