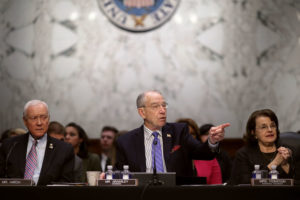 Last November, US Sen. Diane Feinstein [D-CA], the Ranking Minority Member of the Senate Committee on the Judiciary, wrote to longtime Donald Trump advisor Roger Stone requesting documents, and an interview before her committee looking into alleged Russian collusion in the 2016 election.

She was concerned about statements, she wrote in her letter of Nov. 15, that Stone made about “backchannel communications” with Julian Assange.” This suggested to her, she wrote, that he had “advance knowledge of Wikileaks’ plans to disclose information obtained from a cyberattack on US computer systems.”

“[W]e believe that you have information,” Sen. Feinstein wrote, “that would assist the Committee in its investigation related to the 2016 presidential election. ” She laid out her evidence, culled, she disclosed, from five sources –a published letter from the office of the Director of National Intelligence and four media reports.

She laid out her charge in her letter – that Stone probably had information regarding Russian interference – and offered a glimpse at her reasoning by making these points:

Sen. Feinstein implied she had confidence in the Intelligence Community’s “high confidence” assessment that Russia “interfered in the 2016 election, with the goal of undermining faith in our democratic processes and harming Secretary Clinton’s candidacy.” She quoted an Intelligence Community assessment that “‘Putin and the Russian Government developed a clear preference for … Trump.’”

To complete her letter, suggesting the request and her evident suspicions were not pulled from thin air, Feinstein named her sources that provided the gravitas of evidence that Stone was involved in Russian interference that prompted her request.

On April 6, Stone forcefully replied to Senator Feinstein rebutting some of what he seemed to suggest were innuendo and supposition, based as they were largely on media reports.

Stone’s letter read in part, “According to your letter … so-called news reports and a single unclassified, highly-conclusory intelligence assessment prompted your request… [O]ther than the DNI opinion, all sources you have cited are politically-biased [media] outlets…”

Then Stone tried to address the concerns of Sen. Feinstein by reiterating her points in her letter [in bold] and then responding to them:

Stone: “As I testified to the House Select Committee on Intelligence in September, 2017, when I told the Southeast Broward Republican Club that I had communicated with Assange, it was through a back channel – in this case a confirming source who had contacts on the WikiLeaks legal team. I have never spoken to or met with Julian Assange.

“[T]his Tweet is a reference to information …  in the Panama Papers [published April 2016] which exposed the Russian business dealings of John and Tony Podesta and [other] published information about the Podesta brothers’ business dealings …  Note that my Tweet says ‘the Podesta’s.’ While some may have once called the President ‘the Donald,’ no one has ever called John Podesta ‘The “Podesta.’

“My reference was … to the Podesta brothers[’]… extensive business dealings in Russia … reported by the mainstream media…   I [did not] make any reference to John Podesta’s email nor did I predict that they would either be illicitly-obtained or published….”

In mid-September, you said that you expected Wikileaks to ‘drop a payload of new documents on a weekly basis fairly soon.’”

“In June 2016 Julian Assange told CNN that he had material on Hillary Clinton and would publish it. On July 25th James Rosen of Fox News [said] … WikiLeaks had information on the Clinton Foundation. My remarks to the Southeast Broward Republican club on August 8, 2016 reflected this tip.

“In mid-August 2016 Randy Credico, a radio journalist…  who had contacts on the WikiLeaks legal team told me that Assange had ‘the motherlode’ on Hillary and that WikiLeaks would begin releasing it October 1….

“I had no advance notice of … the source, the content or the precise timing of the WikiLeaks publication of the allegedly-hacked material from the DNC, nor of any other materials…

“I never received any material … from WikiLeaks or Julian Assange and have never passed any such material to Donald Trump, The Trump campaign or anyone else…”

You have admitted to communicating with Guccifer 2.0, an anonymous internet persona that claimed responsibility … for hacking the Democratic National Committee’s computers.’

Stone responded, “I reject the assertion that Guccifer 2.0 is a Russian asset. Although our intelligence services insist this is the case, these are agencies consisting of the same people who lied repeatedly and publicly about the government’s collection of metadata on American citizens, until Edward Snowden proved they were lying.

“They are … the same intelligence assets that electronically-surveilled some your colleagues’ offices and activities in the Senate, about which an agency Director flat-out lied to the American people and the United States Senate, once caught and confronted.

“The Intelligence community’s own assessment… states that, ‘Guccifer 2.0… claimed to be an independent Romanian hacker [and] made multiple contradictory statements and false claims about his likely Russian identity…  We assess with high confidence that the GRU relayed material it acquired from the DNC and senior Democratic officials to WikiLeaks. Moscow most likely chose WikiLeaks because of its self-proclaimed reputation for authenticity. Disclosures through WikiLeaks did not contain any evident forgeries.’”

Stone then explained that ‘high confidence’ of the intelligence community is ultimately an opinion.

Stone wrote, “Not even the highest confidence ‘assessment’ constitutes proof of any sort, except of the assessors’ opinion, in this case the assessment of institutions that, at the time of that assessment, manifested a clear bias against the President.”

“This is most definitely true….  In many cases even though Donald Trump was sweeping the delegate contests, established party leaders were appointing committee members who were hostile to Donald Trump’s candidacy.

“Because the Republican national convention is internally governed by its own rules…  it is technically possible to manipulate the … makeup of the voting majority … to hijack a presidential nomination. This, in fact, happened in 1952 when Dwight Eisenhower wrenched the nomination from the hands of Sen. Robert a Taft of Ohio….

“Paul Manafort is among a small group of political operatives with strategic and organizational experience at party conventions….

“Under Manafort’s leadership the Trump campaign turned back an attempt by the Republican Party establishment, led by Senator Ted Cruz, to amend convention rules to hijack the nomination from the front runner, Donald Trump….

“… I am certainly among those who recommended [Manafort’s] recruitment…”

“[I]t has been reported that you spoke with President Trump about the dismissal of FBI Director Comey.

“… the President and I have both denied this…  … I believed Mr. Comey should have been terminated as soon as the President assumed office, for good cause and irrespective of any activities involving any actual or possible investigations related in any way to President Trump.”

The Intelligence Community has concluded that Russia interfered in the 2016 election, with the goal of undermining faith in our democratic processes and harming Secretary Clinton’s candidacy.

“…[O]ur Intelligence Community has become grotesquely politicized. The recent indictment of 13 Russian nationals who in 2016 conducted a small-scale digital media campaign indicates that their messaging was everything from pro- Trump to anti-Trump, anti-Hillary to pro-Hillary, co-Sanders and otherwise. The level of spending on that effort was minuscule in the …  multibillion-dollar presidential contest.

“As I testified to the House Select Committee on Intelligence I did not engage in, nor do I know anyone else, associated with the Trump Campaign or otherwise, who engaged in any conspiracy, collaboration, coordination or collusion with the Russian state or any other foreign nation….

As explained in the January 6, 2017 Intelligence Community assessment: “We further assess Putin and the Russian Government developed a clear preference for President-elect Trump.”

“{This] is the thin product of a politicized government bureaucracy. In view of the approximately $145M funneled from Russian and Russia business-connected energy Executives into the Clinton Foundation, the $500,000 honorarium paid to Bill Clinton by … Russian energy interests, as well as the Podesta brothers’ lucrative [Russian] banking, uranium and gas deals, a more objective conclusion based on actual evidence would indicate that the Russians had already purchased Hillary Clinton.”

Stone added that he would provide  materials Sen. Feinstein requested from him.

Click here to post a comment
NXIVM sex slaver Raniere claimed to have invented teleconferencing – gets hit with $444,000 fine for bogus suit against AT&T and Microsoft
PRESENTING: YOUR ANDREW CUOMO “LIE OF THE DAY”