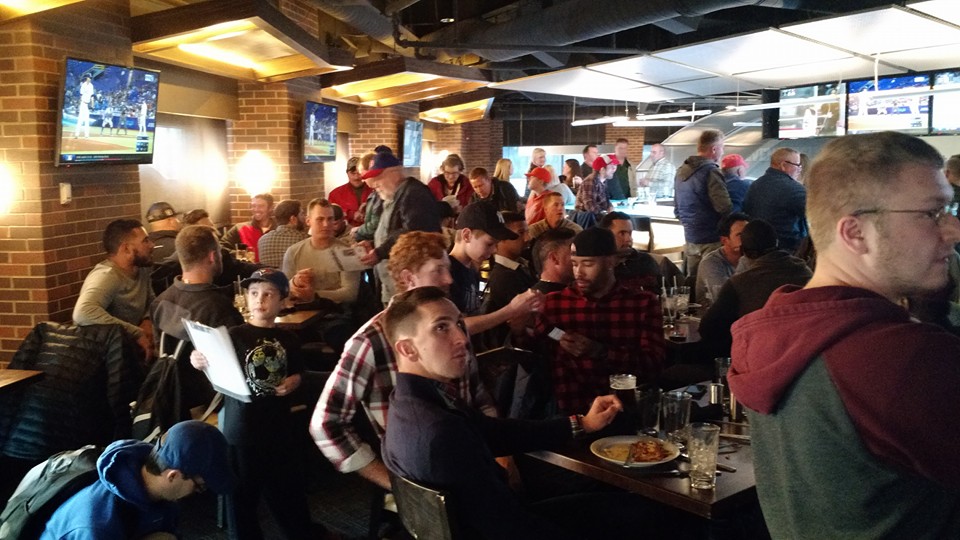 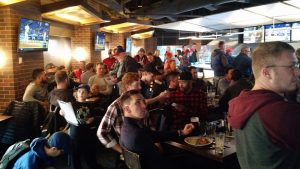 A chance to enjoy food, drink and sports. A slew of Bisons fans, many with youngsters in tow, descended on 716 Food And Sport at HarborCenter tonight to get their first glimpse of the 2016 players with the Buffalo Bisons.

"There are only eight players who were with us in 2015 who are returning this season, so I'm just getting used to the new guys here and connecting names and faces," said Bisons Director of Public Relations Brad Bisbing. He and Voice of the Bisons Ben Wagner took to the microphone to welcome fans and patrons at 716, many who were in the house catching the Buffalo Sabres game on the big screen, to get them into the baseball spirit. Fans were going table to table, shaking hands with the players and collecting autographs. Team mascots were also in the house early on to offer photo opps and selfies with the fans.

One of the new players on the Bisons roster has strong Buffalo roots. Relief pitcher Ben Rowen shuttled among four different organizations last season, being claimed off waivers by the Toronto Blue Jays late last season. He made it to the Jays' 40 man roster, and was optioned to the Bisons towards the end of Spring Training. Rowen was born in Buffalo, his family moved when he was eight, but his parents are now back living here. "I had a keen eye on Buffalo as soon as the Blue Jays picked me up," said Rowen. "So it's really a thrill to be playing for a team I still consder my home town."

The 27 year old Rowen has returned to Buffalo many times to stay with family, and in fact will be living with his parents while he is on the Bisons roster. "I've got friends here, and my favorite food places. I used to love Pizza Plant as a kid, and just walking here from the ballpark tonight I see they've opened a place downtown right next door. No doubt I'll be making my way over there sooner than later." Rowen is a submarine style throwing middle reliever, but sees himself in whatever role the team has in mind for him. "I can certainly do set up or close games if it comes to that. We will see what the team's needs are as the season unfolds."

While noshing on Buffalo food and libations at 716, most of the guys had a keen eye on the TV sets, not so much the Sabres/Devils game on the big screen, but the Toronto Blue Jays vs Tampa Bay Rays game running simultaneously. "We're celebrating the end of winter and the beginning of baseball season," said Ben Wagner.

The team leaves tomorrow to open the season Thursday in Pawtucket. Home opener is set for a week from Thursday against Rochester at Coca Cola Field with a 2:05PM start time.