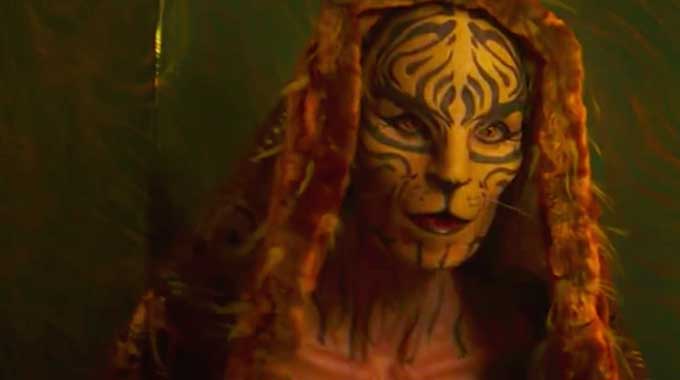 Eva Tiamat Medusa, 55, of the Phoenix area, has almost completed her journey (she calls it “transspecieism”) to become a “mythical beast” -- like a dragon video-game character -- through purposeful facial scarring, surgical implants and even removal of both ears.

• Eva Tiamat Medusa, 55, of the Phoenix area, has almost completed her journey (she calls it “transspecieism”) to become a “mythical beast” — like a dragon video-game character — through purposeful facial scarring, surgical implants and even removal of both ears. “Tiamat” was born Richard Hernandez before becoming female and now sports such features as reptilian-style skin “scales,” green-colored “whites” of the eyes, “horns” on her forehead and, of course, breasts. (However, she is perhaps so far satisfied with one part, as she is still a “pre-op” transsexual.) [Daily Mail (London), 4-5-2016]

• The Pentagon admitted recently that it has no way to know how many parts or devices are in its equipment inventory — except by going through its estimated 30 million contracts (on the text-unsearchable electronic database) one by one. For a recent Freedom of Information request from a software developer (for the Pentagon’s number of “HotPlug” power-extenders for computers), it quoted a retrieval price of $660 million to cover 15 million hours of work. [Center for Public Integrity via Slate.com, 3-18-2016]

•  The most recent problem with the Defense Department’s prospective, ultra-modern F-35 fighter jet, revealed in March, is that its “radar control” sometimes malfunctions and that system updates will not be ready until 2020. In the interim, an Air Force official advised that, as a workaround, the radar could be turned off and then back on again (similar to restarting a glitchy computer).

• Michael Ford, 36, a U.S. Embassy staff member in London, was sentenced in March to 57 months in prison for having run a “sextortion” email scheme preying on young girls — from his heavily monitored embassy computer workstation, operating undetected for two years. (One workday last April, for example, he sent 800 emails from his desk “phishing” for gullible social media users.) [The Guardian (London), 3-8-2016] [Washington Times, 3-23-2016]

•  Inequality on Parade: (1) The city council in Palo Alto, California, trying to retain some of its Silicon Valley non-millionaires, proposed a subsidy plan in March to help with steep housing costs. In a town where tiny homes sell for $2 million (and are immediately knocked down and rebuilt), subsidies will be available even to families earning $250,000 a year. (2) In February, a family court in England reduced the child-support payments from hedge fund financier Christopher Rokos to the mother of his 7-year-old son from the equivalent of about $17,000 a month to about $11,300 — though that amount includes more than $1,200 a month for “wine” (perhaps, in case the kid is a handful). [KPIX-TV (San Francisco), 3-22-2016] [Bloomberg Business, 3-11-2016]

ν     The giant HSBC Bank, which was let off the hook in 2012 for its money-laundering by paying a $1.9 billion settlement and promising to vigilantly guard against future money laundering, was revealed in March to be regressing. HSBC’s monitor said that the bank somehow failed to stop transactions by a company whose professed business included exporting miniskirts to Iran (which would be against international sanctions but also not exactly smart business). In another incident, a 19-year-old Mexican man in the drug-cartel-intensive Sinaloa state was allowed to open a private-wealth account with just a bagful of cash, claiming to be a “shrimp farmer.” [Wall Street Journal, 3-29-2016]

ν     In March, Kingdom Church, in the south London district of Camberwell, was fined the equivalent of about $10,900 by the Southwark Council for its amplified music and incessant “loud preaching,” ritually performed “almost daily” at around 3 a.m. A spokesperson told the London Evening Standard that the timing was necessary because that is when evil spirits are most likely to be present. [London Evening Standard, 3-18-2016]

ν     Downloads and Uploads: (1) A new weight-loss device being tested in the U.S. (“AspireAssist”) is billed as a less-expensive alternative to bariatric surgery, with the ability to evacuate up to 30 percent of recently eaten food from the stomach before digestion. A tube, through a port in the stomach, sucks (“aspirates”) the food. (2) Researchers at HRL Laboratories in California, in a recent journal article, reported that test subjects without airplane-pilot knowledge nonetheless performed flight simulations 33 percent better than a control group after the researchers uploaded electrical signals to certain piloting-helpful areas of their brains. [CTV News (Toronto), 2-28-2016] [Frontiers in Human Neuroscience via Daily Mirror (London), 3-23-2016]

ν     Latest Behavior Standards: (1) The town council in Bracebridge, Ontario, approved a new municipal bylaw in March ending existing prohibitions on people engaging in “yelling, shouting, hooting or similar noises.” (Other noise controls, such as on audio devices, or by humans between 11 p.m. and 7 a.m., remain in effect.) (2) Also in March, the city council in Saskatoon, Saskatchewan, was considering a proposed anti-bullying bylaw prohibiting gossip or (according to the National Post) “rumor- mongering, name-calling, taunting, mocking and ostracizing” — not only in the streets and parks but in “public” places such as bars and restaurants. [Toronto Star, 3-23-2016] [National Post, 3-19-2016]

ν     Veterinarian Tristan Rich, in Melbourne, Australia, was credited in March with saving the life of a 9-year-old goldfish (“Bubbles”) by removing its brain tumor. Dr. Rich had to first figure out how to keep Bubbles out of water long enough to operate, but finally rigged a contraption to continually splash water over the gills. This was Dr. Rich’s second heroic goldfish surgery. (Bubbles’ breed was not reported; ordinary goldfish can be purchased for less than $1.) [Yahoo News Australia, 4-1-2016]

ν     Bad enough that Alfonso Mobley Jr., 26, is a “sovereign citizen,” self-proclaimed as exempt from obeying laws or paying taxes, but on April 5 he also lost both hands — when a bomb he was working on exploded in Columbus, Ohio. The bomb was made of the same material as that in the November terrorist attacks in Paris. A 2010 FBI report labeled sovereign citizens a domestic terrorist group, but Mobley’s associate (who was not hurt) told police the bomb was to be simply a diversion for their planned bank or armored-car robbery. [Columbus Dispatch, 4-6-2016]

ν     First it was “Pastafarians” of the Church of the Flying Spaghetti Monster insisting on wearing colanders for driver’s license photos. Then, in Portland, Oregon, last year, a man who goes by “Bishop” insisted on his own driver’s license “religious covering” — a “fox” hat to honor his “seven drums” religion. The DMV turned him down, but in March 2016, he won his appeal.

ν        In the latest episode of an over-the-top obsessive cat, Sarah Nathan’s “Brigit,” age 6, had her cover blown in March when she collected a dozen boxer briefs and about 60 socks — all apparently klepto-lifted from neighbors in Hamilton, New Zealand. Nathan admitted that she may ultimately have to stash some underwear around her farm just to keep Brigit stimulated. [KATU-TV (Portland), 3-12-2016] [Stuff.co.nz, 3-21-2016]