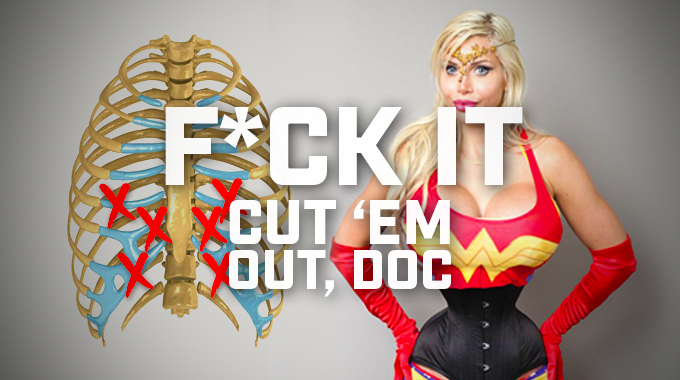 Born in Sweden, she gave up a career as a trained electrician to come to the United States to pursue her goal of looking "like a cartoon character" -- which she has surely achieved with her now-16-inch waist. [WRTV (Indianapolis), 5-19-2016]

Ms. Pixee Fox reported in May that she was recovering nicely from cosmetic rib-removal surgery, performed by one of the few doctors in the world who offers it (Dr. Barry Eppley of Carmel, Indiana). Though she has had more than a dozen “beautifying” procedures, she had trouble finding a surgeon who would agree to take out six “free-floating” ribs (ones not attached to the sternum). Born in Sweden, she gave up a career as a trained electrician to come to the United States to pursue her goal of looking “like a cartoon character” — which she has surely achieved with her now-16-inch waist. [WRTV (Indianapolis), 5-19-2016]

Leading Economic Indicators
Triple Crown winner American Pharoah earned an estimated $8.6 million racing but, now retired, could earn as much as $35 million just by having sex. Stallions reportedly can breed into their 20s, and the horse, now barely age 4, will have 175 conquests by the end of this summer, according to a May report by CNBC. One industry worker said Pharoah has put on weight, spends his spare time peaceably eating grass, and “looks more like a relaxed horse.” A spokesman for the Kentucky farm now housing Pharoah said he “has proven to be very professional in the breeding shed.” [CNBC, 5-2-2016]

Latest Religious Messages
The Keystone Fellowship Church in North Wales, Pennsylvania, has a tradition of congregants reserving pew seats by leaving Bibles in place, but worshipper Robert Braxton, 27, was having none of that on April 24 and took a saved seat anyway. Witnesses told Philadelphia’s WCAU-TV that when one church member gently tapped Braxton on the shoulder to inform him of the tradition, Braxton snapped at him and became disruptive. Congregant Mark Storms, 46, flashed a gun and confronted Braxton, who punched Storms, adding, “That’s not a real gun” and “What are you going to do, shoot me?” Storms, contending that he felt threatened, fired two shots, killing Braxton, and was charged with voluntary manslaughter. [Philly.com, 4-30-2016]

Bright Ideas
– The Moscow Times reported in May that bailiffs in Russia’s Perm region, employing originality as yet unseen in America in attempting to collect an overdue debt, arrested the debtor’s cat. The bailiffs listed the feline’s value at the equivalent of $23, and the man came up with that sum the next day and took the cat home. The Federal Bailiffs Service explained that all the other “property” in the apartment was in other people’s names. [Moscow Times, 5-6-2016]

– Shannon Egeland, 41, already convicted in 2014 of running a mortgage-fraud operation during the 2004-2008 real-estate boom, pleaded guilty in May 2016 to the subsequent crime of deliberately having himself shot to gain his judge’s sympathy (and to collect on disability insurance he had purchased the week before). Egeland, scheduled to start a 10-year sentence for the 2014 conviction, told the judge he had been assaulted by gunfire when he stopped in traffic to help a pregnant woman, but in reality he had ordered his teenage son to shoot him in the legs with a 20-gauge shotgun. [Associated Press via Yahoo News, 5-11-2016]

New World Order
(1) German soldiers participating in a four-week NATO exercise in Norway earlier this year apparently had to abort their efforts days earlier than other countries — because Germany’s defense minister, Ursula von der Leyen, had imposed strict rules on overtime pay. Soldiers are to work no more than 41 hours a week, she said, according to revelations by London’s Daily Telegraph. (2) Britain’s venerable Oxford University issued a formal suggestion to law lecturers recently that they give “trigger warnings” (and allow classroom absences) if the class subject matter might be unpleasant to some students. Complained one frustrated lecturer, “We can’t remove sexual offences from the criminal law syllabus — obviously.” [Daily Telegraph, 4-10-2016] [The Independent (London), 5-10-2016]

Oops!
– This correction appeared in The New York Times print edition of May 10: “Because of an editing error, an article on Monday (May 9) about a theological battle being fought by Muslim imams and scholars in the West against the Islamic State misstated the Snapchat handle used by Suhaib Webb, one of the Muslim leaders speaking out. It is imamsuhaibwebb, not Pimpin4Paradise786.” [New York Times, 5-10-2016]

– Amateurs: Government agencies trying, legally or not, to hide details from public inquiries under freedom-of-information demands usually resort to indelibly blackening out what they do not want revealed, but the Public Health Agency of Canada recently tried a unique method, according to an Associated Press correspondent. The AP had requested files on the 2014 Ebola outbreak, and, revealed reporter Raphael Satter, the documents finally arrived from the PHA with parts carefully “redacted” — using “Scotch tape and paper.” Satter reported that he got everything the AP had asked for by merely peeling the tape back. (A Dallas Morning News reporter, commenting on Satter’s experience, wrote, “Canadians are so nice.”) [Toronto Star, 5-17-2016]

Perspective
King Cove, Alaska, population 923, lies between two massive volcanic mountains on one of the Aleutian Islands, unconnected to other civilization and 625 miles from any medical facility (in Anchorage), “accessible” only by a weather-challenging “puddle-jumper” airplane to Cold Bay for a connecting flight. About two-thirds of the residents have flying anxieties so severe that King Cove has a makeshift vending machine dispensing Valium. U.S. Sen. Lisa Murkowski has campaigned to build a road to Cold Bay to eliminate the nerve-wracking flights, but it would disturb a federally protected wilderness, and the U.S. Interior Department has so far declined. (Unconsidered: Channel the late Sam Kinison, who implored starving Ethiopians to just “mo-o-o-ove!” since food doesn’t grow in the desert.) [Alaska Dispatch News, 4-14-2016]

Armed and Dangerous in the F State
– Michael Blevins, 37, reported to Florida Hospital in Orange City (near Daytona Beach) in May after finally realizing, three days after the fact, that he had shot himself while cleaning his handgun. He said he was on pain medication and besides, was wearing a black shirt that obscured blood stains. He said he had felt a sharp pain but that, mainly, it had aggravated his back injury, causing him to fall and hit his head against a coffee table, and thus was not aware of the origin of the loud noise the .22-caliber handgun made. Deputies investigated briefly but closed the case. [Daytona Beach News-Journal, 5-10-2016]– Charles Richardson, 35, was arrested at the Beachcomber Hotel in St. Pete Beach in May after he had accidentally locked himself out of his room but broken back in by shooting the lock with his handgun. [BayNews9.com (St. Petersburg), 5-19-2016]

Update
Annual Chinese “Tombsweeping” celebrations have made News of the Weirdseveral times, most recently in 2008 when the government reinstated it as an official holiday. (Traditionally, people brought jewelry and other valuables to ancestors’ gravesites for burial with the body, thus theoretically “enriching” the relative’s afterlife.) In recent years, during economic turbulence, some brought only paper images of valuables (or just left signed checks — “generous” checks!). Now, a retail market has developed of ultra-cheap knock-off upscale items, such as fake Gucci shoes, computers, big-screen TV sets, and even one full-size “air-conditioner” (because, perhaps, it may be “hot” where the deceased is headed?). A Hong Kong representative for Gucci has issued warnings against trademark abuse, even though the flimsy fakes are hardly convincing. [New York Times, 5-5-2016]

A News of the Weird Classic (March 2012)
The 547-acre FBI Academy on the grounds of the Quantico (Virginia) Marine Base houses a firing range on which about a million bullets a month are shot by agents in training, but it also happens to be a de facto wildlife refuge for the simple fact that the academy is off-limits to Virginia hunters. Thus, according to a December (2011) ABC News dispatch, deer learn that, despite the gunfire (sometimes at astonishingly close range as they wander by the targets), none of them ever gets hit. The academy has also become a “sanctuary” for foxes, wild turkeys and other critters. [ABC News, 12-26-2011]