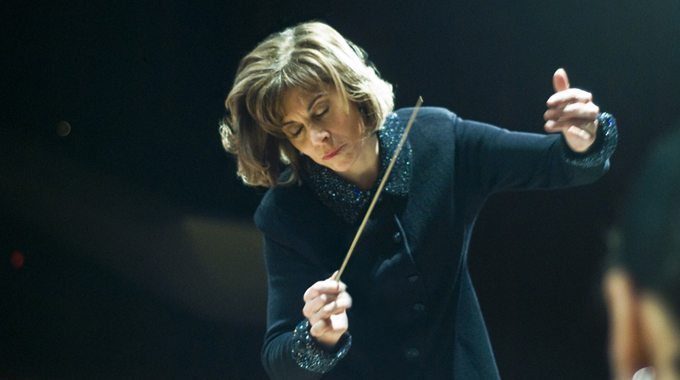 “Mozart was like a god to Mahler” says BPO music director JoAnn Falletta. “When you hear the music of Mozart and Mahler, it’s almost like listening to the beginning and the end of a musical tradition that was truly Viennese.

The BPO pulls out all the stops this weekend

There is a popular urban phrase, “Go big or stay home”, that might readily serve, slightly altered, for the Buffalo Philharmonic Orchestra’s Kleinhans Music Hall program this Saturday at 8pm, repeated on Sunday at 2:30pm. BPO music director JoAnn Falletta is, indeed “going big”, by programming Mahler’s mighty Symphony No. 5 in C-sharp Minor, along with Mozart’s Concerto No. 5 for Violin and Orchestra in A major, K. 219, “Turkish” as an appropriately tasty curtain-raiser. Luckily, for Buffalo area classical music lovers, the BPO is also staying at home for this comparatively rare event, so the audience will be able to experience every nuance of what is arguably the most perfectly composed of the lengthier Mahler symphonies, in the acoustically superior venue of Kleinhans. 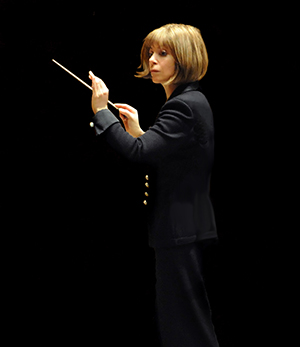 The young Japanese violinist Mayuko Kamio made a very favorable impression in her BPO debut at Kleinhans in July of 2014. She shared the solo spotlight with Agustin Hadelich in a concert billed as “The Rising Stars of the Stradivari Society”, performing Ralph Vaughan Williams’ transcendently ethereal pastoral romance, The Lark Ascending, before switching gears for  Sarasate’s Zigeunerweisen (Gypsy Airs), Op. 20, and also partnering Hadelich in Bach’s Concerto in D minor for Two Violins.  So, while many concert-goers will be eagerly looking forward to hearing her interpretation of the Mozart concerto, why exactly do you program Mozart with Mahler?

“Mozart was like a god to Mahler” says BPO music director JoAnn Falletta. “When you hear the music of Mozart and Mahler, it’s almost like listening to the beginning and the end of a musical tradition that was truly Viennese. Mahler was at the end of a long line of Viennese composers, and there is something very poignant about looking back to the beginning of that tradition through the music of Mozart”.

At the time that Mahler composed his Fifth Symphony, during his summer holidays in 1901 and 1902, he was enjoying success as the director of the Vienna Court Opera and the principal conductor of the Vienna Philharmonic. Yet, he has suffered a sudden major hemorrhaging in February 1901 and his doctor told him that he had come within a hour of bleeding to death, an episode that required a lengthy recovery period, and that looking back, prefigured his later deadly medical problems. Still, in the fall of 1901 he met Alma Schindler, the love of his life, and by the time he returned to his country retreat in the summer of 1902 to complete his new symphony, they were married and she was expecting their first child.

“In his Fifth Symphony, Mahler moved for the first time beyond song in his symphonic writing”, says Falletta. “There is no text, no chorus, and no soloists, on which the music is based. Yet, the music of this symphony is among the most cogent and the most powerful that Mahler composed, and every note has tremendous integrity. This is especially apparent in the amazing Adagietto movement, a piece that can stand on its own. It is Mahler’s love letter to Alma, very tender and inward-looking, yet quite sensual. All five movements of the Fifth Symphony exist in a flow, a roller coaster ride that ends in a joyous, radiant Finale”.

The Buffalo Chamber Players will conclude their very successful first-year residency at the Albright Knox Art Gallery on Thursday May 19 at 8pm with a concert featuring a performance of the Tempest Fantasy, a composition for clarinet, violin, cello and piano by Buffalo native Paul Moravec, who will be in the audience for this event, which won the Pulitzer Prize for Music in 2004. “My Tempest Fantasy”, says Moravec “is a musical meditation on various characters, moods, situations, and lines of text from my favorite Shakespeare play, The Tempest. Rather than trying to depict these elements in programmatic terms, the music simply uses them as points of departure for flights of purely musical fancy.” BCP Artistic Director Janz Castelo says of the program, “We are thrilled to have Buffalo’s own Paul Moravec back in Buffalo for our concert. The Tempest Fantasy is an incredible tour de force for our musicians and I know our audience will enjoy it as much as we enjoy playing it!”

The other musical selections on the program, like the Tempest Fantasy, explore lesser-heard instrumental combinations. Rather unexpectedly, two fine, rarely heard Masses by Michael Haydn, the younger brother of the far better known Joseph Haydn, have been recently performed locally, so many classical music lovers will no doubt welcome an equally rare opportunity to hear his Quartet for English horn, violin, cello and bass, a work from 1795, as well as the far better known Overture on Hebrew Themes for clarinet, string quartet and piano, a 1919 work by Sergey Prokofiev.

About her 2003 composition Throwing Mountains, a piece for bass clarinet, cello, double bass, and piano, Buffalo-based composer Caroline Mallonée says “Throwing pots is the terminology for the process of creating a ceramic piece using natural forces and natural materials” writes Mallonée. “The momentum of the wheel allows the potter to create symmetrical objects out of earth and water. Throwing pots is also a fun and loud way to dispose of thrown pots. In Throwing Mountains, ranges and peaks arise from the momentum of the music. Throwing mountains in the end might also be said to be a fun and loud way to dispose of thrown mountains”.

The Albright-Knox Art Gallery will be open to concert ticket holders from 5 to 8 pm. The AK Café will also be open for dinner and reservations are required. A post-concert reception with the musicians and composer Paul Moravec will follow the concert.