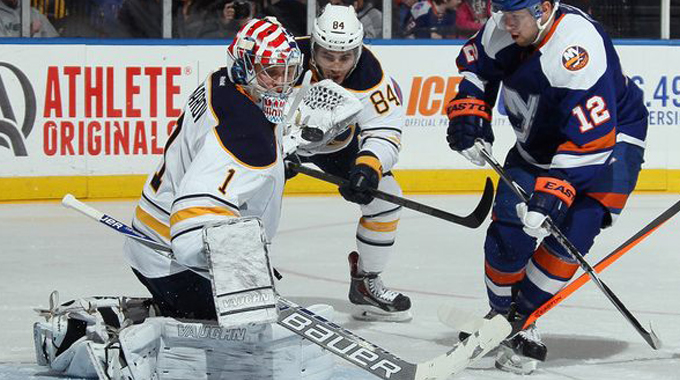 It was yet another season in a decade to forget. The Buffalo Sabres finished the 2015-16 season in seventh place in the Atlantic division, with a 35-36-11 record. It is progress from their 23-51-8 season the year prior though and it is a definite step in the right direction. The light at the end of the Buffalo tunnel is getting brighter and brighter and this team is not as far as off as many people might think.

Going into this past year, Buffalo was given dismal odds to win the Stanley Cup by NHL betting site TopBet. The draft will certainly change things though, especially if 2015’s was any indication. The Sabres selection day last year changed the landscape of the team and in the span of 24 hours, set this franchise up for the next ten years.

The movement didn’t all start at the draft itself though, it began at the 2015 trade deadline. Buffalo added F Evander Kane and D Zach Bogosian from Winnipeg for F Drew Stafford and D Tyler Myers. The deal instantly set off a chain reaction. The team instantly improved their front and back end, but they weren’t done there. They then added budding superstar prospect F Jack Eichel with their number two selection, along with G Robin Lehner and veteran F David Legwand in a trade with Ottawa shortly after. They then added F Ryan O’Reilly and F Jamie McGinn from Colorado before the day was done.

The Sabres were impatient but kept their composure. If they can keep that same discipline with their moves at the 2016 NHL Entry Draft, they can truly turn the tides in the Eastern Conference over the next few years.

Over the span of one season, the team has already jumped from dead last to the 25th for Goals For Per Game and from dead last to 12th in the league for Power Play Goals. Scoring has often been a weak point for the Sabres, but they are improving at a rapid pace. With the help of newcomer Chad Johnson in goal, along with Robin Lehner and Linus Ullmark, the Sabres also jumped from a league worst to 15th for Goals Against Per Game. So the proof is most certainly in the pudding for Buffalo’s improving skillset.

Due to their rise in the standings, Buffalo headed into the 2016 Draft Lottery in unfamiliar territory. For the first time in a long time, they weren’t considered favorites. They were actually considered underdogs when it came to envelope time. The team ended up getting the eighth overall selection in this year’s talent-filled draft, which means they’ll continue to stock the cabinet with ease.

It seems the days of management changing the landscape of the organization are over though, so we’re not expecting the same fireworks that we saw the year before. Should they happen again though, given their offseason track record, the home crowd at the First Niagara Center certainly won’t be opposed to it.