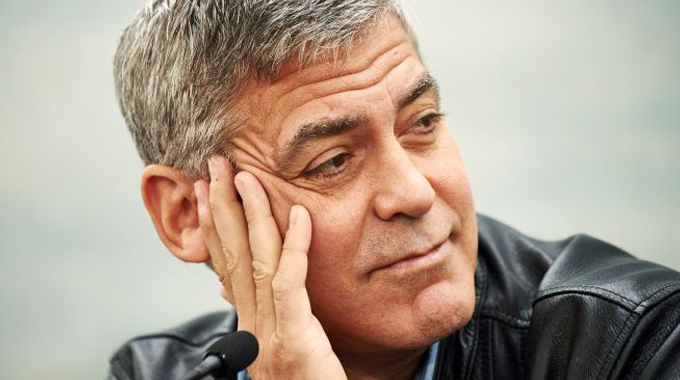 When you’re trying to plug your new movie at the Cannes Film Festival and your young wife’s “wardrobe malfunction” grabs all the headlines, it’s never a good sign.

When you’re trying to plug your new movie at the Cannes Film Festival and your young wife’s “wardrobe malfunction” grabs all the headlines, it’s never a good sign. And when the putative Democratic nominee for President says she’d rather have you as her running mate than Bernie Sanders, and the resulting furor not only buries any talk of your movie but of your young wife’s flashing for the camera as well, you know your goose is cooked.

Welcome to George Clooney’s miserable world. Sure, he’s rich, famous and good looking for a 55-year-old man, but his new film, “Money Monster,” is a heavy handed attempt at relevance that would have been more at home in the 1980s than it is today.

In fact, Clooney should be happy that people are talking about his wife Amal’s dressage problems and Hillary Clinton naming him as her top choice for vice president. Because hearing people talk about “Money Monster” can’t be any fun for him at all.

Clooney plays a character loosely based on Jim Cramer of TV’s “Mad Money,” who picks stocks and investment strategies in the most over the top fashion imaginable until, one day during the live broadcast, a guy with a gun walks in who has lost all of his money due to the Clooney character’s bad advice.

Say it ain’t so! A corrupt monetary system in which the little guy can get hurt? The lefties love it, and real life guys like Clooney have enough cabbage to hire their own investment strategists rather than rely on some TV madcap.

The movie was directed by Jodie Foster, who’s always been big on social significance, which “Money Monster” oozes from its very pores.

Deep down, Clooney’s character is tortured by fear, self loathing and the remnants of some integrity he’s tried to bury as he clawed his way to the top. Ho hum, right?

The guy with the gun has also wired himself with explosives and there are SWAT teams, helicopters and other dramatic devices that attempt to breathe some action into this morality play. Spoiler alert: It doesn’t end well for him.

The still bewitching Julia Roberts plays Clooney’s long suffering producer, a nothing role she cannot have envisioned when she first set off in pursuit of her own star on the Hollywood Walk of Fame.

There hasn’t been a decent movie made about the stock market since Oliver Stone’s “Wall Street” in 1987. And “Wall Street” succeeded only because the characters came across as real, though generally loathsome, people.

Who can forget Michael Douglas, as the villainous Gordon Gekko, preaching the capitalist mantra, “Greed is good”? Or Charlie Sheen being treated to cocaine and oral sex in the back of a limo? Talk about typecasting.

But that was nearly 30 years ago, when social and political lines were much more sharply drawn. Who would have thought then that a liberal firebrand like Barack Obama would come rushing to bail out a Wall Street that had gotten itself into a mess, complete with a set of talking points that included mumbo jumbo like “too big to fail”?

In that respect, “Money Monster” is something of a nostalgia piece, wistfully reminiscing about a time when good and evil were far more clearly defined than they are today.

Like the tobacco industry, the stock market makes for an easy target. This is America, after all, where we tell ourselves that wealth is generated by hard work rather than any sort of cleverness. This is fundamentally untrue, of course, but it makes people feel better about the lives they’ve chosen to lead and so the majority buy into it, while actors like Clooney and directors like Foster pander to it.

Clooney should be thankful for that gust of wind in Cannes that blew his wife’s dress up around her neck, and also for Hillary’s ringing endorsement. And if the alternative is to keep making politically correct stinkers like “Money Monster” – which took in a measly $15 million at the box office on its opening weekend – he just might want to think about that vice president thing.