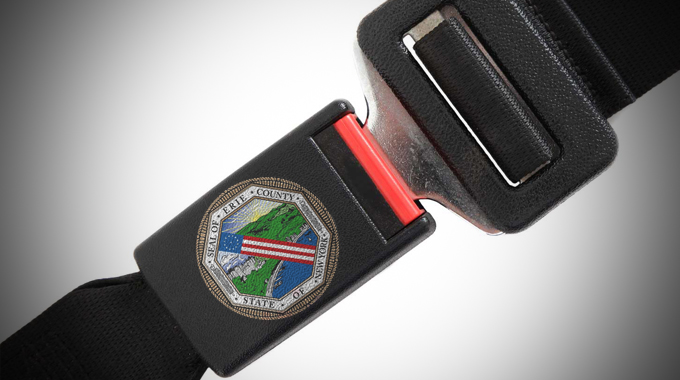 Erie County Sheriff Timothy B. Howard, once again, is reminding motorists that the nanny state ‘Click It or Ticket’ revenue generator will be in effect between May 23 to June 5, just ahead of one of the busiest travel weekends of the year.

Erie County Sheriff Timothy B. Howard, once again, is reminding motorists that the nanny state ‘Click It or Ticket’ revenue generator will be in effect between May 23 to June 5, just ahead of one of the busiest travel weekends of the year.

The county sheriff’s department says it will likely set up checkpoints and inspect and search cars in its efforts to force people to wear seatbelts.

And they will give tickets worth perhaps tens of thousands of dollars to citizens who thought they would make their own safety decisions inside their own property [car].

“Every day, unbuckled motorists are losing their lives in motor vehicle crashes,” said Sheriff Howard to explain the godvernment agenda.

According to the National Highway Traffic Safety Administration, nearly half of the 21,022 passenger vehicle occupants killed in crashes in 2014 were not restrained. The other half had seatbelts on and died anyway.

“Erie County Sheriff’s Deputies will be taking a no-excuses approach to seat belt law enforcement, writing citations day and night,” according to a press release sent out by the sheriff this week.

New Hampshire, whose state motto is “Live Free or Die”, has enacted neither a primary nor a secondary seat belt law for adults.

The seat belt law is noteworthy also as one of the first American laws that breached the once sacred principle of liberty that an individual is free to do anything that does not injure another and that government is not responsible citizens’ personal safety decisions.

In New York, the maximum penalty for a seat belt violation is $150 for the first offense.

The Erie County Sheriff’s Office will have multiple dedicated road patrols and the possibility of road check sites set up throughout the county during this campaign.

Sheriff Howard said, “The bottom line is that seat belts save lives. If these enforcement crackdowns get people’s attention and get them to buckle up, then we’ve done our job.”

In a nanny state that is their job.