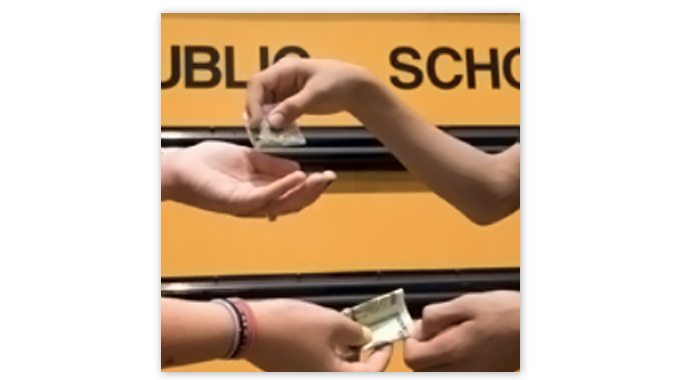 Your local government high school is often the best drug store in town. Government schools are the key distribution point for illegal drugs in many communities. One study concluded that “80% of the nation’s high school students and 44% of middle-schoolers have personally seen illegal drugs used or sold and/or students drunk or high on the grounds of their schools.”

It is in the nature of progressivism as a failed ideology to endlessly search for scapegoats for its failed policies or face ideological suicide by admitting the problem is itself.  Progressivism is a kind of self-imposed mental disability that prevents progressives from ever admitting that their policies have failed.  A good example is the failure of progressives to acknowledge the obvious link between the drug problem and the K-12 government school problem.

This excerpt from Government Schools Are Bad for Your Kids, is a good start for those who wish to advance beyond the denial stage.

Your local government high school is often the best drug store in town.  Government schools are the key distribution point for illegal drugs in many communities.  One study concluded that “80% of the nation’s high school students and 44% of middle-schoolers have personally seen illegal drugs used or sold and/or students drunk or high on the grounds of their schools.”[1]  Another study warns that rates of illegal drug use are no lower in suburban schools as than urban ones.[2]

Illegal drugs are tiny and easily hidden.  The government has made them quite profitable by making them illegal.  That allows those willing to risk prison—and we haven’t reached the bottom of that group yet—to make lots of money selling drugs to those who want them.  Take lots of bored young people who don’t want to be there and put them into a government school for six hours a day and you have created a wonderful profit opportunity for drug dealers.  Finally, since it is illegal to sell drugs to anyone, there is little additional incentive not to sell to children.  The prohibition of illegal drugs removes any possibility of regulating the age of the user.  One of the unintended consequences of the Rockefeller Drug Laws of the 70’s that established tough mandatory minimum sentences for drug dealing was to create an incentive to recruit younger dealers such as high school students who for one reason or another are not subject to those penalties.

Thanks to the counterproductive policy of drug prohibition, there is a thriving drug market in many government schools, urban, suburban and rural.  There is no escape since the free market is an efficient distribution mechanism, far more efficient and creative than the bureaucrats paid to stop it. And once again, the facts explode the myth of the “safe” suburban school:

Because of the severe drug problems in government schools, the courts have bestowed great power on administrators to become drug enforcers.  In one case, the court held that a principal could strip search a student suspected of possessing drugs:

“I was embarrassed and scared, but felt I would be in more trouble if I did not do what they asked,” said Redding in a sworn affidavit following the incident.  “The strip search was the most humiliating experience I have ever had.””[4]

This decision was later overruled by the Supreme Court but too late for the victim here and only on the particular facts on that case.  The court did not prohibit strip searches generally and their “syllabus” is a good warning to you:  “Its indignity does not outlaw the search.”[5]  As if to put an exclamation point on the court’s warning, an Iowa high school administrator recently ordered five female students to be strip-searched over a suspected theft.  The missing money was not uncovered.[6]

Why is the problem so bad?  We have already seen the answer in prior chapters.  Government schools are filled with people who don’t want to be there and who are bored and alienated.  As we are constantly reminded by those who defend government schools: they must take all students.  The fact that your kids spend six hours a day with fellow students subject to virtually no screening process is hardly a recommendation.  It is more of a condemnation. It is also difficult to discipline students.  So doing involves a whole host of legal and bureaucratic procedures.  In contrast, a disruptive student can simply be booted from private school.  Those charged with student discipline are bureaucrats, not particularly responsive to parental or student concerns.  Private schools must be so responsive or else face closing their doors due to a lack of customers.

A word to the wise should be sufficient.  If you send your child to a government school, they may learn more about chemistry than you could possibly imagine.

[4] From a brief filed on the student’s behalf, quoted by Jacob Sullum at http://reason.com/blog/show/125297.html