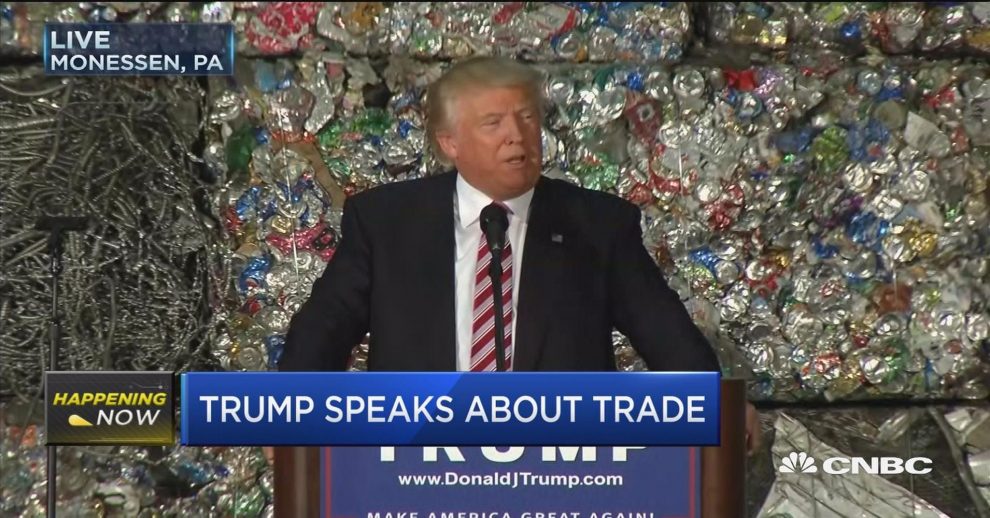 I am not unsympathetic to the Trump Movement as I too am a populist.  That said, Trump is wrong about trade.  Trump is the latest and loudest to tap into a nearly ineradicable strain of economic fallacy known as protectionism.  Protectionism is, as Albert Jay Nock accurately stated, “the robbery of the domestic consumer by the domestic manufacturer.”  The protectionist wants to use state violence to prevent people from making deals with manufacturers and retailers from outside the United States who sell products that are cheaper and/or better than those produced domestically.  If the trade that is banned or discouraged by high tariffs involves a consumer good, the protectionist has obviously made that person poorer by forcing him to buy a more expensive or lower quality good.  If the banned transaction involves a capital good, then the protectionist has weakened a domestic manufacturer by costing that firm revenue, resulting in lower investment and decreased employment.

In a fiat currency economy such as we have, dollars spent abroad must come back to the U. S. economy anyway in the form of purchases of goods, services, real estate or bonds.  Thus, the protectionist also thwarts those generally beneficial transactions.  I am indebted to Milton Freidman for this point.  If, on the other hand, those dollars sent abroad are buried or burned, then the failure to return them simply means that Americans become wealthier as they have sent mere pieces of paper abroad in exchange for valuable goods.  The analysis would be different perhaps in a gold standard economy but we do not have one so it’s academic.

Protectionism also harms American firms and workers by encouraging the rest of the world to construct trade barriers against us, either to retaliate against us or merely to ape our economic illogic.  The great historical example is the Smoot-Hawley Tariff that contributed to the severity and length of the Great Depression.

Protectionism also encourages international conflict and increases the likelihood of war.  The statement attributed to Bastiat makes the point: “if goods can’t cross borders, troops will.”  In a protectionist world where nations cannot easily sell their products in territories they do not control, many will draw the logical, if evil, conclusion that they need to conquer more territory to expand their markets.

Protectionism, by reducing economic opportunities in poorer countries, causes economic distress and creates a powerful incentive to leave one’s ancient homeland and engage in often dangerous ventures to sneak illegally into the United States.  Ironically, protectionists are often the harshest opponents of illegal immigration.  Regardless of one’s views on immigration, a policy which encourages the mass movement of peoples away from their native lands out of sheer economic desperation is not to be encouraged.

Yet another cost of protectionism, rarely noted, is its sheer out of pocket cost.  Protectionism wastes many tens of billions of dollars in enforcement costs, taxes on foreign goods, and increased prices for domestic goods.  I have never heard a protectionist address this major problem for their argument.  It is hard to see how they could.

It’s worth noting that, in private life or in business, the protectionist buys the cheapest goods he can from wherever.  I would bet that at least half of the shoppers at Walmart are strict protectionists in politics.  Thus, protectionists want to make their own, current, rational behavior illegal!

Why does the protectionist flout so much logic, common sense and the liberty and property rights of millions of Americans?  I guess so that the jobs of people whose wages are above market rates can be artificially propped up by the brute force of the state.  Protectionists always duck the question of right and wrong here as in why do they have the right to engage in the armed robbery of other people’s money?  Morality trumps fallacious economic theories.

And protectionism is fallacious.  Prices set by the market, the sum total of all economic choices among the seven billion people on the planet, contain accurate information about value, cost and the scarcity of resources.  The protectionist is a believer in central planning who has the unmitigated arrogance to think that a few bureaucrats or political hacks in Congress, or a few sleazy lobbyists can outwit the market’s incomparable wisdom.  This is absurd on its face and of course there is no evidence for it whatsoever and never will be.  The peaceful, voluntary and supremely efficient free market can be damned says the zany protectionist.  The protectionist is a central planner without any actual plan beyond winging it.

Protectionism, like all regulation, creates legal monopolies, as economist Thomas DiLorenzo has argued.  Legal monopolies allow the beneficiaries to reap unearned and undeserved profits by force from large numbers of people who are usually too scattered and disorganized to defeat tightly organized lobbyists in the sordid corridors of power.  The monopolists?whose precise goal is to avoid the endless labors of market competition?get fat, dumb, lazy and happy with their captive consumer audience and have a decreased incentive to provide cheaper and better goods and services over time.  The result is stagnation and the accumulation of artificially-enormous fortunes as DiLorenzo noted occurred in the Gilded Age.

None of this is to justify America’s current trade policies.  They are often called “free trade” but that is a lie.  Let’s call it managed or regulated trade designed by lobbyists to benefit their special interest clients.  To argue that we are stuck with protectionism or managed trade is a false choice.  Both are bad.

Now, let me tell you what really bothers me about protectionism.  It distracts us from the real problem: the progressive big government albatross that sits on top of the average American worker.  It creates a convenient foreign scapegoat to blame for misdeeds of the real villain: the Progressive State of America. The average American working in the private sector has about half of his income stolen from him by the state and is told how he can spend his half of his own money by thousands of inscrutable regulations and laws.  If he wants to start a business, there are hundreds of taxes, fees, licenses and regulations he must overcome that did not exist when America become the world’s leading economy.

If he seeks employment, his choices are greatly reduced by a hostile business climate that interferes with business development, investment, hiring and growth.  He is born into the world with a load of federal debt spent by dead progressive politicians years ago. He is shunted into a daycare center at three months old by an economy with a shortage of jobs that can support a family with one income.  Next, he ends up in a government-run juvenile detention and propaganda center for twelve years that does not prepare him for surviving in the real world.  Finally, he is encouraged to run up college debt to pay for the absurdly-high salaries of professors and administrators.  The average American faces a daily struggle to survive and a grim future if present trends are projected.  China didn’t do any of this.  Uncle Sam did.

What is Donald Trump’s solution to the decline of America caused by progressive big government?  Make government bigger still and elites ever more powerful by impoverishing the average American even further by making him buy expensive domestic goods he doesn’t want.  That’s not a very artful deal.

Populism is the belief in policies that benefit the average person.  The only viable populist platform is liberty and the free market.  Protectionism always was and always will be a policy that favors wealthy elites at the expense of the average American worker. Politics is a rich man’s sport.

Wake up Donald!  “A foolish consistency is the hobgoblin of little minds.”