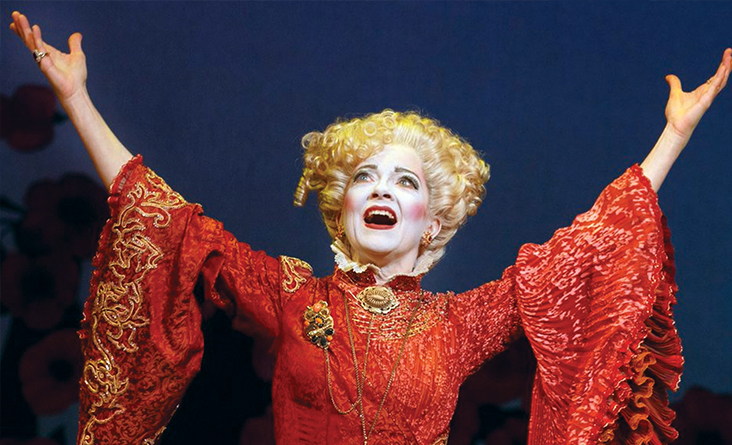 Next week, Broadway megahit, Wicked, arrives at Shea’s for a three-week engagement. The role of Madame Morrible, teacher of the Wicked Witch of the West, will be played by an actor with strong connections to the Buffalo theater community, Tony Award nominee Isabel Keating.

Keating earned her Tony nod for playing Judy Garland opposite Hugh Jackman as Peter Allen in The Boy from Oz in 2003.  She has also appeared on Broadway in Hairspray; Enchanted April; Spider-Man Turn Off the Dark; and It’s Only a Play. Early in her career, however, she worked at Bristol Valley Playhouse in the Finger Lakes town of Naples.  There, she met such Buffalo theater folk as actor Norm Sham of the Kavinoky Theatre and his brother Peter; Randall Kramer, now artistic director of MusicalFare; performer Joseph Mahan, a Geneva, NY native who worked in Buffalo for several year before relocating to New York City; and actor Lisa Ludwig, who is now the managing director of Shakespeare in Delaware Park.

“It was a formative period of all our lives,” says Keating, “and I am still in touch with most of those people!”

Originally from Savannah, Georgia, right out of school, Keating did the non-Equity “StrawHat auditions” in New York City in the early 1980s, and took a job at Bristol Valley.  “I did a number of shows there. The Fantasticks, The Mousetrap, The Miss Firecracker Contest. I remember the people I met there vividly, and so many of them still work in the theater. Joseph “Go” Mahan is one of my closest friends in New York to this day.”

“When Tom Kirdahy who produced it, and his husband, Terrence McNally who wrote it, asked me to stand by for Stockard, I said ‘Yes!’ right away.  To be honest, I was thinking, ‘Stockard will never miss a performance!’”

That prediction proved wrong when Channing injured her knee and had to miss several performances previous to the show’s official opening.

“I will never forget it,” says Keating. “It was 1:10 in the afternoon.  I was in Columbus Circle when I got a text message.  ‘You’re going on!’ We were still in previews. I had learned the role, but I had never actually rehearsed! I texted back, ‘I’m ready. Just get me a cup of tea and my make-up!’”

Keating enjoys the traditions and the coincidences that happen in the theater. Since Wicked opened in 2003, many actors from Carole Shelley to Carol Kane to Rue McClanahan have played Morrible. It pleases Keating to be wearing costume first built for Patty Duke to wear on tour.

Keating views her performance in Wicked as the culmination of a long Judy Garland journey.

At Studio Theatre in Washington, DC, where Keating made her artistic home, she performed in The Rise and Fall of Little Voice, a show that required her to sing in the voices of several great singers, Billie, Barbra, Piaf, Judy. She did “The Man that Got Away.”

Then she did a show called “Judy’s Scary Little Christmas,” in which she did a comical version of Judy in the afterlife.

Then she noticed a casting call for a show being done in workshop.  When she asked her agent to look into it, she was told, “They’ve already called, asking for you.”

The show was The Boy from Oz. Finally she would get the chance to embody Judy realistically.  Her effort would earn her a Tony nomination.

“A career is a combination of talent, work, synchronicity, and luck,” says Keating.  “For many people it seemed as if I appeared out of nowhere and had a Tony nomination, but it didn’t happen that way at all. I had been working for years.  Since Bristol.  When I did Enchanted April on Broadway, I had actually originated the lead role at Hartford Stage while Jayne Atkinson was pregnant.  She did it on Broadway, and then I replaced Molly Ringwald in the other role, Rose. And, of course, the path I took is only one way to have a career.  Look at my friends who are still doing theater in Buffalo! They are very happy and working all the time.”

When I tell her that Lisa Ludwig played her role in the Buffalo production of McNally’s It’s Only a Play, Keating enthuses, “I’m sure she was marvelous.  She was always fantastically talented!”

Keating also notes that a Tony nomination does not mean that she no longer has to audition.

“That’s a myth!” she exclaims.  “When my agent called saying they were interested in reading me for Morrible I was back in D.C. doing Little Foxes. I played Birdie and we were in tech.  That’s a ten hour day. I could not go to New York. I didn’t even have time to make a video for them. I sent them a two-year old video and hoped for the best!”

Thanks to her effort, Buffalo gets to see Isabel Keating as Madame Morrible starting next week.

Her role in Wicked has another interesting connection to other parts of Keating’s career.  While Idina Menzel first played the role on Broadway, in the original reading of Wicked, Elphaba (the Witch of the West) was played by Stephanie J. Block. Subsequently, Block made her Broadway debut as Liza Minnelli, opposite Keating’s Judy Garland in The Boy from Oz.

“This role in Wicked completes the circle!” says Keating.