There is a science to polling. There are honest polls that try to gather accurate information and then there are the polls designed to get the skewed results the pollster wants no matter what the truth may be. A favorite tool of dishonest pollsters is a question that plants or exploits prejudices. For example, in the 2000 primary Karl Rove while working for George W. Bush in the primary against John McCain asked evangelical white voters in southern states “would you be more likely or less likely to vote for John McCain if you knew that he fathered an illegitimate black child out of wedlock?” McCain does have an adopted daughter from Bangladesh but he did not father a black child. Nevertheless, the phrasing of the question was enough to besmirch him with white southern Evangelicals who frowned on having an illegitimate child and any white voters who were racist.

Fox business news anchor Lou Dobbs is an unabashed Trump supporter who has called for Special Investigator Robert Mueller to be fired.

“This is now a man that has to be brought under control, it would seem to me,” Dobbs said of Mueller. “I would fire the SOB in three seconds if it were me.”

Dobbs assuming all his viewers love Donald J. Trump and hate Robert Mueller and the DOJ posted a Twitter poll that was loaded with leading prejudicial verbiage.

“Do you believe the corrupt leadership and actions of the DOJ and FBI are now so outrageous and overwhelming that President Trump should fire Special Counsel Robert Mueller, Attorney General Jeff Sessions and Deputy Attorney General Rod Rosenstein?” Dobbs wrote on Twitter. The response was NOT what Dobbs was expecting or hoping for. 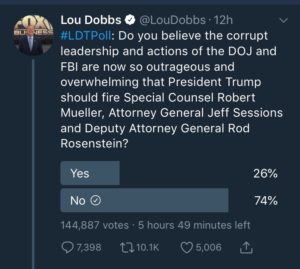 It’s sad that a major network news anchor would call the leadership of DOJ corrupt because it was doing its job. Understandint the action against Michael Cohen is not rocket science. He’s charged with bank fraud, wire fraud, and a few other charges. Cohen brought this on himself. Cohen claims he paid $13o,000 to a porn star out of his own pocket and drew up a contract between her and Donald Trump. When asked where he got the $130,000 he said he took out a home equity loan, which means he probably told the bank he was adding a room or a new roof or some other major home improvement. It’s unlikely he told the bank he needed a $130,000 home equity loan to pay off a porn star. That would mean he misled the bank to get the money, which is fraud. Furthermore, Trump said he didn’t know anything about the contract. A lawyer is forbidden to enter into a contract on behalf of a client if the client doesn’t know he’s doing it. Those are only the obvious points. But why did the Feds need to seize records rather than ask for them? Why did they get a “No Knock” warrant? What about attorney-client privilege?

Dobbs may want to crucify Meuller for the raid but it was the federal prosecutors in the U.S. Attorney’s Office in Manhattan that obtained search warrants for Cohen’s office after receiving a referral “in part” from Mueller after Mueller found evidence of a crime committed in New York while doing his own investigation into collusion. And Mueller didn’t contact the Manhattan U.S. attorney. After coming across what he believed was a crime that was out of the scope of his investigation Mueller took the evidence to Acting Attorney General Rod Rosenstein and Rosenstein called in the New York prosecutor. The federal prosecutor in New York, by the way, was appointed by Trump.

As long as we’re looking at a failed poll from a from a Fox anchor here’s another poll that looks bad for Fox. Could the winds of change be blowing against Trump and his propaganda machine at Fox News? 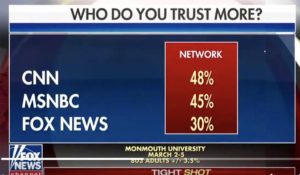