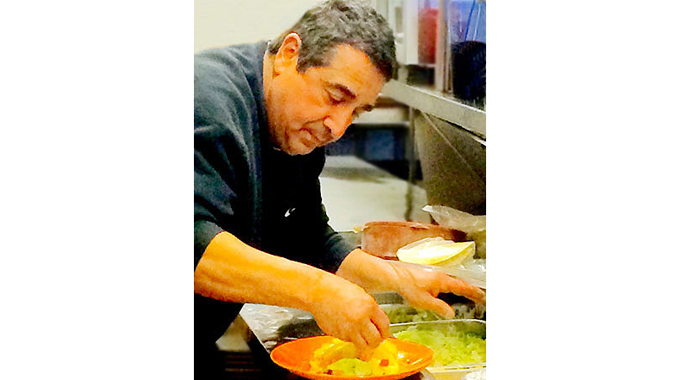 Take a seat at Gramma Mora’s and they arrive almost immediately – homemade crispy tostada chips with freshly made tomato salsa, which has a well-rounded flavor with just the right amount of heat.

Gramma Mora’s owner and chef, Charles Giovino, is the son of the late Mercedes Giovino who, in 1980, helped him build Gramma Mora’s restaurant on Niagara St. The age-old recipes and home-style Mexican cooking were passed down by Mercedes’ mother and Charles’ grandmother, and so they named the restaurant Gramma Mora’s.

It was the first Mexican restaurant in the region.

From the start, Giovino channeled his creativity by mastering the art of preparing authentic Mexican cuisine. Gramma Mora’s soon became a neighborhood treasure. When the restaurant was first established, there were no local purveyors who sold authentic Mexican ingredients like the tortillas, spices and especially the Chili peppers that Giovino needed to make his dishes perfect. Giovino gathered his ingredients from Albuquerque, New Mexico and other places in the Southwest and Mexico, itself.

“We pride ourselves on using true Mexican flavors to cater to our loyal customers of Western New York,” Giovino said.

Continuing on Hertel Ave., in its tradition of offering the true subtleties of Mexican fare, if you like it mild, you get it mild, but if you like it hot, ask for “Mexican Hot” and you will get the real, spicy, hot taste of Mexican cuisine.

Gramma Mora’s red sauce is prepared using red chiles grown specially and handpicked in Albuquerque, New Mexico for the restaurant, which adds to the authenticity of this delicately hot Mexican favorite. Their robust and nourishing homemade green chile sauce provides a sensation of heat combined with a picante burst of flavor. The sauces are carefully crafted by Giovino, drizzled atop tacos, tamales, enchiladas, and chimichangas, which in turn are filled with succulent strips of beef and chunks of chicken or pork.

Other savory Gramma Mora’s sauces include their fabulous ranchero burrito and their exquisite velvety cheese sauce with a tang that will awaken your taste buds and satisfy your palette.

Gramma Mora’s also recently spiced up their décor which is in green and red accents and adorned with art work, photographs, and beautiful murals reminiscent of old Mexico. It is intimate space with comfortable tables and booths that make it both cozy and creates an environment which allows for privacy which makes conversation easy. It’s a great place to take a date.

Gramma Mora’s has a full bar; their specialty is the margarita. In fact, Monday is “Margarita Monday” and Happy Hour specials are varied and last throughout the week.

The appetizer selection is large and includes not only an array of nachos, but chili con queso (cheese dip with Mexican sausage and tortillas), chile relleno, chimichangas (rolled in a flour tortilla filled with your choice of meat), and pork tamales.

The homemade guacamole, made fresh to order, is buttery and mild, with luscious chunks of fresh avocados.

Then there are the shrimp dishes for which Gramma Mora’s is justly famous: the arroz con camarones (large shrimp pan seared in garlic sauce) and camarones fajita are served with rice, beans and guacamole. Both are exquisite dishes.

Of course, Gramma Mora’s authentic menu includes all the traditional and well-loved dishes: quesadillas, enchiladas, burritos, tacos, tamales, fajitas, tostadas and chorizo, but they offer a fare far more sophisticated than the usual Tex-Mex food that you can easily find elsewhere. Here, they come out steaming and savory, spiced to perfection, the meat literally melts in your mouth.

Their signature carnitas, chunks of tender pork, are marinated in green and red chili sauce, then slowly cooked; this is the real taste of Mexico; pork never tasted like this before.

And steak, sizzling in various dishes like the chimichanga and the fajita, is at once both lean and juicy. The enchiladas are virtual taste sensations, especially the verde (chicken with green salsa topped with lettuce, tomato and sour cream), and the rice and beans that accompany most dishes are so full of flavor and satisfying that they could be a meal in themselves.

You can become addicted to this kind of fare.

But save room for dessert. The flan is rich and saturated with flavor and its sauce has a real home-cooked texture. The apple empanada tastes surprisingly similar to mom’s apple pie but with a Mexican twist; served warm right out of the oven, topped with ice cream in the middle and dollops of whipped cream, it’s a visual treat as well as a sinful delight.

With all its successes over 35 years, Gramma Mora’s is still evolving, expanding with its new brunch menu and updated catering menu. A seasonal patio is soon to open with a beautiful, festive new awning. Stop by, sit back and relax with a refreshing margarita as you take in the sights of picturesque Hertel Ave.

Gramma Mora’s is the gold standard for Mexican food in Western New York.

Come amigo, see for yourself.

Gramma Mora’s is located at 1465 Hertel Avenue and offers Dine-in, Take-out and catering options. Many of their products are available in your local groccer’s frozen aisle as well!