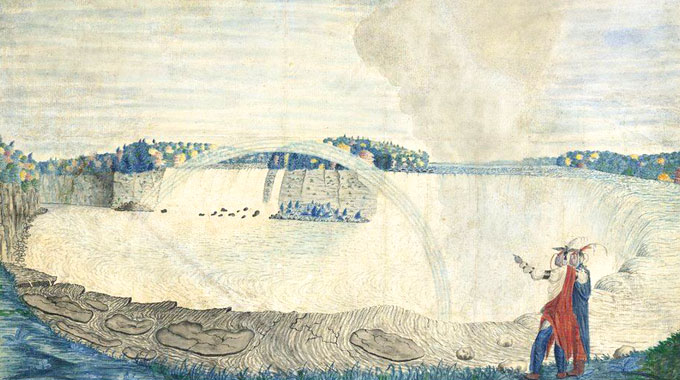 An anonymous North American buyer was the high bidder, but the sale immediately raised concerns with the British Reviewing Committee on the Export of Works of Art and Objects of Cultural Interest (RCEWA), which recommended an export bar.

You can buy it, but it stays in London

The small painting, “An East View of the Great Cataract of Niagara,” depicts a horseshoe of plunging water, the ever-present rainbow, autumnal woodland and two Native American people in elaborate dress. It was painted in 1767 by Capt. Thomas Davies is believed to be the first depiction of the natural wonder by someone who actually saw it.

Both the Canadian and American shorelines are clearly visible in the work.

In April, it was auctioned for $211,421 at an Christie’s London sale. Previously, it had been in the collection of Peter Winkworth, an eccentric British millionaire with an all consuming interest in things Canadian.

An anonymous North American buyer was the high bidder, but the sale immediately raised concerns with the British Reviewing Committee on the Export of Works of Art and Objects of Cultural Interest (RCEWA), which recommended an export bar.

According to British Culture Minister, Ed Vaizey, the export bar was issued on the grounds of the work’s “close association” with British history and life, and its significance for the study of Britain’s history in the fields of “18th-century exploration, scientific and military endeavor.”

The painting also has a wider significance, Vaizey said. “This watercolour painting not only provides us with the first glimpse of Niagara Falls, but it also sheds light on Britain’s achievements in 18th-century exploration, military and topographical art.

“I hope that the temporary export bar I have put in place will result in a UK buyer coming forward and that the watercolour will be available for all to better understand Britain’s global role in the 18th century.”

This week, it was announced that a British buyer had been found, the taxpayers of Merry Old England.

The National Army Museum ponied up $219,070 to acquire the painting, according to a report Tuesday in the U.K. Guardian newspaper.

Ian Maine, assistant director of the museum, called it “a fantastically important piece of military art”, not just as the earliest view of one of the famous falls, but as evidence of relations with the indigenous peoples, some of whom sided with the French, some with the British.

The museum, which has a vast art collection, is currently closed for a major redevelopment project but will reopen next year.

Davies (1737-1812) was a Royal Artillery officer who served four tours of duty in North America between 1757 and 1790 – a tempestuous period covering the period of the war of independence which lost Britain the United States, but also the victories of General Wolfe over the French that secured Canada. He studied drawing and recorded military operations in watercolors during the North American campaigns.

Elected to the Royal Society in 1781, Davies’ style combines the precision of military artists with the skills of naturalists.

Outside the United States, the concept of “cultural heritage” has taken hold, and most countries around the world have laws in place to prohibit the export of art and artifacts deemed significant by local experts.

The laws were enacted during the second half of the 20th century, mostly in reaction to the wholesale looting perpetrated by private collectors and museums in countries such as the United States, France and, ironically enough, Great Britain, of ancient Greek, Roman and Egyptian masterpieces.

Even more ironic may be the fact that a painting executed in Ontario, of a natural wonder owned jointly by the United States and Canada, could be deemed culturally significant in England, a country more than 4,000 away.