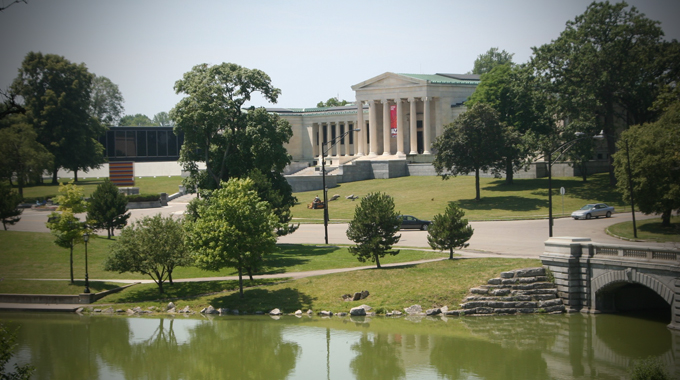 If we could ever put the interests of institutional advancement over the prissy sensibilities of cynics, we may be able to make something spectacular of the The Albright–Knox Art Gallery which barely earns 200,000 attendees annually at its Delaware Park location.

If we could ever put the interests of institutional advancement over the prissy sensibilities of cynics, we may be able to make something spectacular of the The Albright–Knox Art Gallery which barely earns 200,000 attendees annually at its Delaware Park location. To put that in perspective, the Niagara Falls State Park attracts more than eight million visitors per year and the Canadian side attracts another 14 million.

By moving the Albright-Knox across the street from the state park [there is plenty of undeveloped land in downtown Niagara Falls], we could elevate the institution to global prominence. By placing an architecturally jawing museum within the photo-frame of Niagara Falls, we will make the institution instantly recognizable to global audiences, yielding newfound stature and influence that comes from a global stage.

Imagine the revenue growth that would be possible. Of those 22 million visitors to Niagara Falls every year, it would be reasonable to forecast museum attendance by the millions of visitors rather than hundreds of thousands – and with them vastly more operating resources for programing, exhibits, curators, acquisitions, and events. 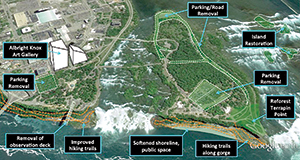 In Niagara Falls, the Albright-Knox could quickly wean itself from taxpayer dollars while simultaneously advancing the institution’s core mission. At Delaware Park, the institution will be limited to its 200,000 visitors, continue to depend on public resources, present fewer exhibitions, provide less programing, and will lack what global relevance it could otherwise have had.

The Buffalo Zoo is a sadder experience than SeaWorld for many animal lovers. With a 23-acre footprint in Delaware Park, the exhibits are small and the animals emote that they are caged. The administration of the Zoo does fine, given all of the constraints: limited public resources, a relatively small base of patrons, and a lack of public appetite to expand into the park. 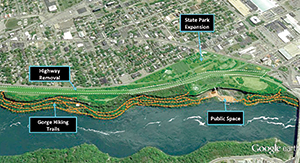 Billionaire developer Howard Milstein owns nearly 140 acres of land in downtown Niagara Falls and Senator Charles Schumer has been prodding the community to come up with a plan. Schumer has argued that the billionaire is a reasonable person who would be receptive to a plan that was brought to him by the community.

So let me propose this: a world class, first rate, awing zoological experience.

The Buffalo Zoo currently attracts 400,000 visitors per year with a $7.43 million annual budget, $1.85 million of which is a taxpayer subsidy. In Niagara Falls, it could conceivably attract 5 million, and can do so without the subsidy. With ticket prices ranging, perhaps, between $10 and $50 per visitor, imagine the operating budget, the job creation, the habitats, and the animals that could be afforded.  We cannot turn our nose at that kind of opportunity.

Lack of regional leadership leaves us all poorer

On survey after survey of Niagara Falls’ tourists, there is a resounding complaint. Tourists tend to be day-trippers because, after the state park, there is little to do. So rather than staying for a weekend or a week, they depart after four hours – not because they don’t want to stay, but because they can’t find anywhere to spend money. What a wonderful problem to have. 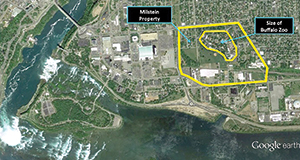 Western New York’s staggering lack of leadership, exceedingly parochial mindset, and dastardly political culture leaves us all poorer.  Decades of bad decision-making and the pettiness of our thinking have kept the region locked in economic doldrums that – despite the best attempts of Governor Andrew Cuomo’s propaganda ministry, known as Empire State Development – we’ve yet to escape.