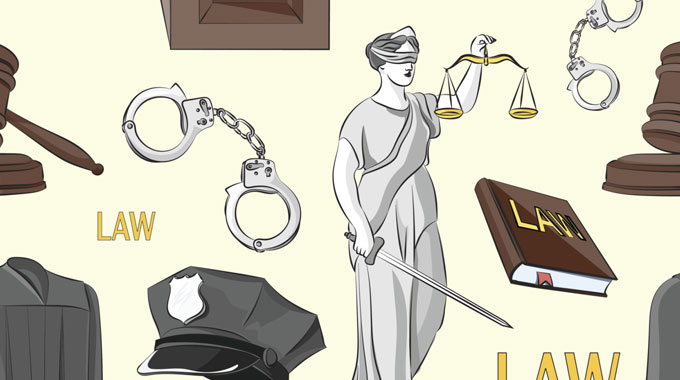 Jurors in this state and throughout the United States are firmly told by judges they must follow the judge’s instructions “on the law,” but in so doing, are the judges themselves following the law?

Jurors in this state and throughout the United States are firmly told by judges they must follow the judge’s instructions “on the law,” but in so doing, are the judges themselves following the law?

Keep in mind that jurors are constitutional officers!  That’s right.  You folks are there in both the state and federal constitutions.  Yet, you are treated like school children in court and ordered to do this, that or the other thing by various court staff and judges themselves.  Where do they get the authority to do that?

The state constitution states at Article I, §2: “Trial by jury in all cases in which it has heretofore been guaranteed by constitutional provision shall remain inviolate forever . . .” Article I, §6, states: “No person shall be held to answer for a capital or otherwise infamous crime . . . unless on indictment of a grand jury . . . The power of grand juries to inquire into the wilful misconduct in office of public officers, and to find indictments or to direct the filing of informations in connection with such inquiries, shall never be suspended or impaired by law.” 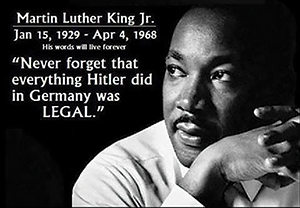 The federal Constitution states at Amendment Six: “In all criminal prosecutions, the accused shall enjoy the right to a speedy and public trial, by an impartial jury of the state and district wherein the crime shall have been committed . . . “

Let’s go back to why we have juries in the first place.  The Founders had a cynical view of government as a constant threat to abuse its monopoly power.  Juries were a counter-measure.  Not being part of the government, they broke up the monopoly of power that leads to corruption. Yet, government agencies including courts are jealous of their power and judges have used their superior knowledge of the law and their professional status, i.e., full-time, paid positions, to defeat the original intent and nature of juries and turn them into the passive and docile creatures they too often are today. 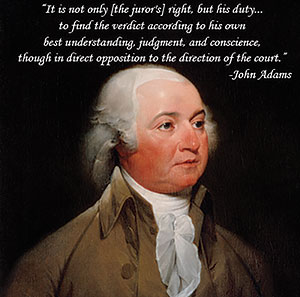 In two important court decisions, which I critiqued in detail in a law review-type article, judges usurped the ancient powers of juries to override the law when the law was either intrinsically evil or when the law was being applied in such a way as to work an injustice under the particular circumstances.  See, Duffy v The People, 26 NY 588 (1863); Sparf v United States, 156 U.S. 51 (1895); “The Rise and Fall of Jury Nullification,” Journal of Libertarian Studies (2001). At the time the Constitution was ratified, the greatest lawyers among the Founders held that juries could override the law when they saw fit to do so.  That list includes: John Adams, Thomas Jefferson, John Jay, and Alexander Hamilton. Adams wrote: “It is not only [the juror’s] right, but his duty . . . to find the verdict according to his own best understanding, judgment, and conscience, though in direct opposition to the direction of the court.” Hamilton wrote: “. . . in criminal cases, the law and fact being always blended, the jury, for reasons of a political and peculiar nature . . . is entrusted with the power of deciding both law and fact.”

Both of the cases that trashed the Constitution and overruled the Founders are fallacious and neither discussed the Constitution.  No shock there as the judges were deciding to take power away from juries and allot it to themselves. Judges are great at disguising a naked power grab in legalese.

The result of these cases is that juries by and large no longer serve as a check on the power of judges, prosecutors and the police, all of whom therefore wield tremendous and often unchecked powers over the citizenry.  Judges and prosecutors are largely immune from suit and, having generally been installed into office by the power elite, are rarely held accountable for their behavior by the public.  We have seen recently that prosecutors can engage in endless and sweeping investigations of citizens.  These investigations use seemingly limitless resources and personnel, last for years and often involve a review all of the suspect’s papers and digital records, contrary to the whole point of the Fourth Amendment—to ban general searches.  Often, the original impetus for the investigation turns out to be bogus but is used as an excuse to review every tiny detail of a person’s life to see if he or she violated any of the thousands of pages of inscrutable laws and regulations the progressive state has foisted on us whether we know them or not.  The Javerts of the world will parrot the idiotic cliché, “Ignorance of the law is no excuse.”  Jean Valjean might reply, “Of course it is, you fool!”

Again, unlike you and I, prosecutors can’t be sued.  They are rarely held politically accountable.  Their job security is Politburo-like.  They are rarely if ever disciplined by the authorities for ethics violations.  They are therefore free to engage in ruthless political witch hunts or retaliation against political foes with impunity. 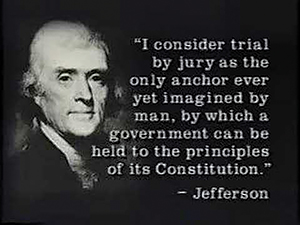 Is there any way to rein them in?  Yes.  Juries need to re-discover their rich legacy of defending liberty in America, dating back to Colonial times.  They need to recognize that judges have usurped their lawful constitutional authority.  They need to fight to get it back.  It won’t be easy.  The regime will fight back and hard.  I advise against any acts of civil disobedience.  I advise you to follow all lawful orders and not to get embroiled in legal problems.

I recommend fighting back using lawful tactics only.  Be creative.  Use your imagination.  Be inspired.  What would happen, for example, if a juror asked a judge a question: “Your Honor.  If we are constitutional officers, what gives you the right to tell us how to decide a case?  Where does the Constitution give you that right?  Were Jefferson and Hamilton wrong on this point?” To the best of my knowledge, asking questions is still legal in the United States.  When it becomes illegal it just might be time to take strategy to another level entirely.

Grand jurors may have even more wherewithal to challenge the authorities.  They are given explicit power to investigate the willful misconduct of public officials.  They may wish to start by investigating this instance of misconduct: how juries were stripped of their lawful constitutional authority by judicial fiat.  Fasten your seatbelts!