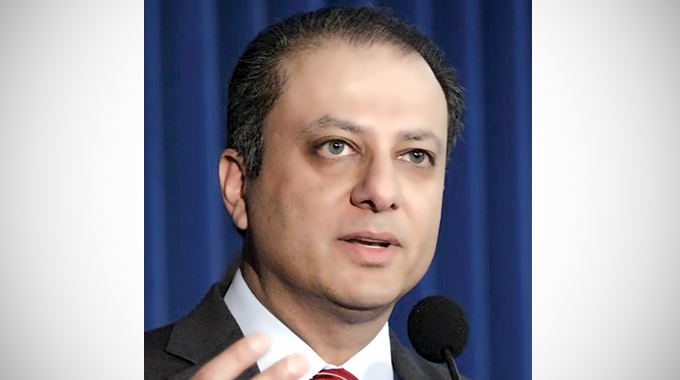 This may come as a shock but I have a slightly different take on the corruption scandal that led to the indictment and conviction of former New York State Assembly Speaker Sheldon Silver and former New York State Senate Majority Leader Dean Skelos.  I like to start with origins when analyzing historical events.  So let’s begin at the beginning.  Preet Bharara is a Democrat with degrees from uber-progressive Harvard  and Columbia.  He worked for uber-progressive US Senator Chuck Schumer for five years before being appointed by President Barrack Obama to be the U.S. attorney for Manhattan, the progressive capital of the world basically.  Beware Greeks bearing gifts.

You would think that conservatives who claim to support federalism would at least wonder why the federal government is involved in what appear to be state crimes involving corruption.  Not a peep.  They are too busy enjoying the fall of Silver and the ongoing investigation of New York State Governor Andrew Cuomo.  I have pointed out many times that Republicans, lacking any real philosophical differences between themselves and the Democrats, love to and need to demonize Democratic personalities—Cuomo, the Clintons, Silver and Obama.  The fact that suddenly an unelected appointee of Obama from the camp of Schumer may now be the most powerful man in New York State government apparently does not faze them.  This further centralization of power from the voters to Washington D.C. is cause for concern.

The laws which are the basis for these prosecutions are quite vague which raises the possibility of politically-motivated prosecutors targeting their opponents.  Pretty much everything politicians do involves trading largesse for donations or other favors.   A clever prosecutor can manipulate a cowered grand jury into indicting virtually anyone, and, by stacking hundreds of counts and astronomical possible jail terms, can usually squeeze a plea out of a terrified and overmatched defendant.  Power corrupts prosecutors too is a lesson many have forgotten.

But what bothers me the most about these prosecutions and investigations is Preet Bharara’s announced goal of, in my words, making big government work and restoring the public’s confidence in it.  I can see why progressives have that goal but why would conservatives and Republicans sign on?  I always find it amazing when conservatives try to make failed progressive programs work better.  The K-12 schools and the welfare state come to mind.  Add the Vietnam War to the list.  And now, let’s make Albany’s control over the state economy through a complex web of grants, loans and tax breaks, work better with a few well-publicized prosecutions.  I dissent.

Power corrupts, true, but illegitimate power is corruption itself and once unleashed, cannot be purified by progressive prosecutors.  In New York State, as the result of the ideology of progressivism that believes that government action will solve all human problems, vast powers have been bestowed on state government including the ability to hand out gigantic sums of money at their whim.  Lacking any market signals, prices or incentives—keep in the mind the whole point of progressivism is to vanquish the free market—economic development bureaucrats and politicians have no choice but to base decisions on their own perceived self-interest.  Whether the decision-making process is technically illegal in Preet’s fertile imagination, it is still corrupt under any rational definition of the term.

So, no progressives.  Preet Bharara will not make your intrinsically corrupt system of economic development graft work better or eliminate its corrupt and evil nature.

If you want to reduce corruption in Albany, shrink its power over the economy.  There is no other way. Alas, we tried that with the Pork Lawsuit a few years back.  In that case, I represented fifty good citizens suing Cuomo, Silver and Skelos to end corporate subsidies pursuant to the plain language of the pre-progressive-era New York Constitution: “The money of the state shall not be given or loaned to or in aid of any private corporation or association, or private undertaking.”

Cuomo, Silver and Skelos and their lawyers fought bitterly to defeat the suit.  We won 5-0 in the Appellate Division but lost 5-2 in the Court of Appeals.  (To watch the oral argument, search for “pork lawsuit” on You Tube.)  It was obviously a politically-motivated decision by the five-judge progressive majority all appointed by the governor whose powers we were challenging.  Alas, Skelos and Silver are going to jail and Cuomo is being investigated in part because of the way they exercised power granted to them by the Court of Appeals judicially amending the Constitution in the Pork Lawsuit.  Karma’s a bitch.